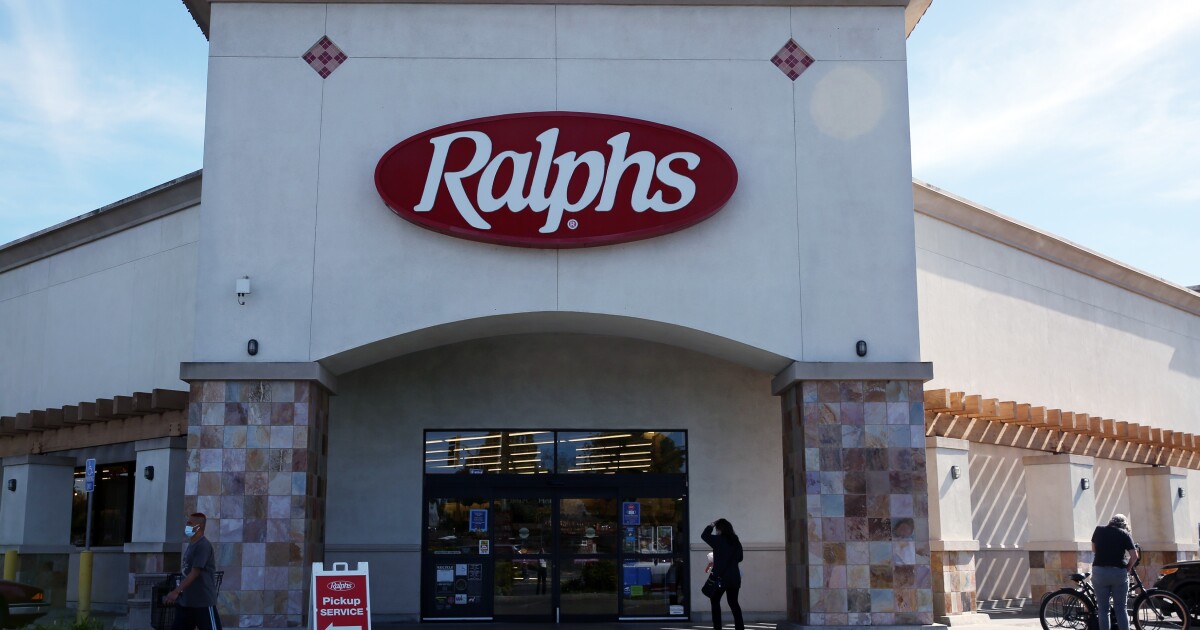 There was disappointment and anger Tuesday at a Long Beach Ralphs that is slated to close over the city’s new law providing “hero wages” to workers at grocery stores.

Ivan Love, 23, a manager overseeing the curbside pickup operation at Ralphs on North Los Coyotes Diagonal, said he heard the news from a flood of text messages co-workers sent him Monday, his day off. With less than three months before the store’s closure, he said, no one is sure where they’ll end up.

Grocery stores are already crowded with employees, he said, and the pandemic makes getting a job harder. Even if his union transfers him to another store, he worries he might not maintain his managerial title or get enough hours.

“If they don’t care about you now … what makes you think they’re gonna care for you by transferring you out?” said Love, who was sporting a mask that read “How may I help you?”

Kroger, the owner of Ralphs, Food 4 Less and other retailers, said Monday that it would close two stores in Long Beach in response to city rules mandating an extra $4 an hour in “hero pay” for grocery workers during the COVID-19 pandemic. In addition to the Ralphs, the company will close a Food 4 Less on East South Street. The moves will affect 200 workers.

Shoppers and employees find themselves in the middle of the dispute. Long Beach was among the first in a growing number of cities — including Los Angeles, Santa Monica, San Jose and Oakland — to consider boosts for front-line workers. The Los Angeles County Board of Supervisors has moved forward with a similar proposal for stores in unincorporated parts of the county.

Kroger, in a statement, described the Long Beach law as a “misguided action that … oversteps the traditional bargaining process and applies to some, but not all, grocery workers in the city. The irreparable harm that will come to employees and local citizens as a direct result of the City of Long Beach’s attempt to pick winners and losers, is deeply unfortunate.”

Jackie Santos, who was stocking up on laundry detergent at Ralphs, said she was “not too happy” about the closure. A regular at the store, she challenged Kroger’s assertion that it was “underperforming” before the city’s new ordinance.

“Is this store struggling or not? I don’t think it is. I mean, I don’t know the figures, but every time I’m here … it’s always full,” Santos said.

She supports the hero pay, in part because her son works in the retail grocery business. “It’s hard work for him!” she said. “$4 isn’t much.”

Surveying the meat counter, Marlene Ormonde, 76, said grocery workers should “absolutely” get the extra $4 an hour.

“They’re putting their lives out here, too, for these people to come in and shop,” she said. “I don’t know why [the company] wouldn’t want to give them the extra money.”

Leaning on a cart full of toilet paper and other goods, Love shook his head. With his wages of $17 an hour, he helps his mother pay rent. The store has made more money since the pandemic hit, he said, with longer opening hours and more customers shopping. He called the decision to shutter the store “unfair” to workers.

“You guys have been giving us the hero pay and taking it away,” he said, referring to Kroger’s temporary $2-per-hour boost, which lasted less than two months at the beginning of the pandemic. “COVID never went away the whole time.”

Some co-workers got sick; others took a leave of absence to keep themselves and their families safe, he said. But for most, he emphasized, not coming to work during the pandemic was never an option.

“We never got a chance to be at home. We stayed open through the whole thing,” he said. “If other jobs are getting paid to be out here, why not us? We never closed down, we never took a break, we never closed early, anything. We’ve been here every day, no matter what.”