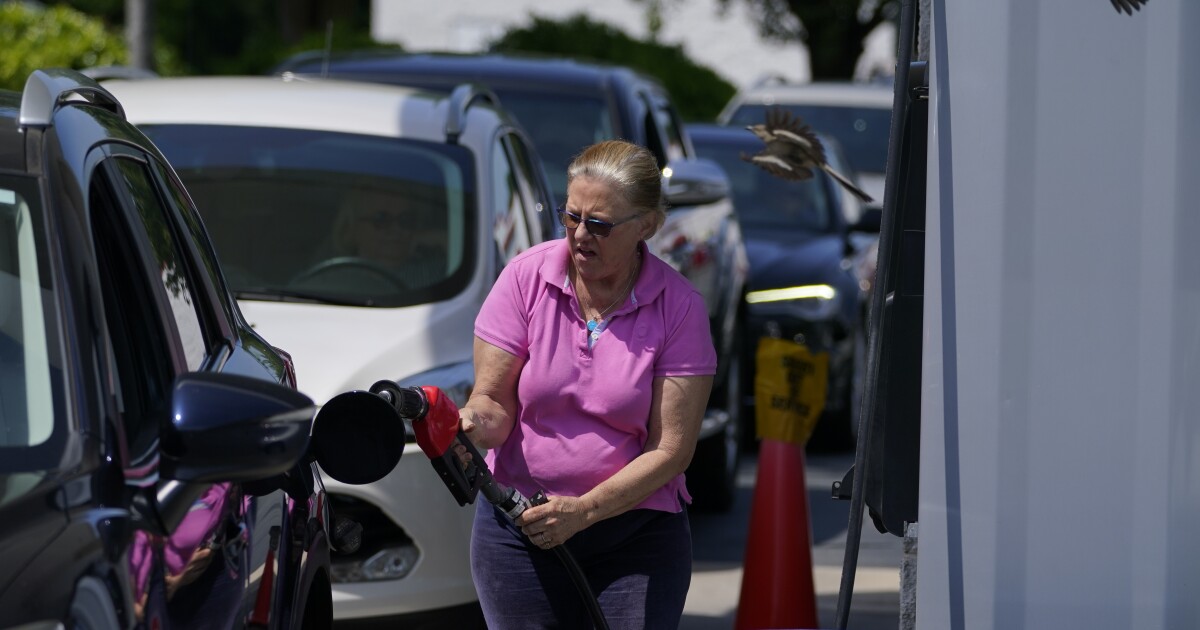 Gasoline prices are jumping and shortages are expanding in Southeastern states as panicky drivers race to fill up and the nation’s largest petroleum pipeline remains shut down, threatening to leave the region light on fuel for days.

Even Californians are feeling that familiar pump-price heartburn — but for different reasons, fuel experts said.

The Colonial Pipeline, which delivers about 45% of the East Coast’s supply, was hit Friday with a cyberattack, raising concerns about the vulnerability of vital U.S. infrastructure. Operations resumed manually on segments of the pipeline late Monday, and Colonial anticipates restarting most of its operations by the end of the week, U.S. Energy Secretary Jennifer Granholm said.

Regular gasoline cost an average of 2.99 a gallon nationwide, up 7 cents in the last week, and $4.16 in Los Angeles County, up 8.25 cents, according to fuel tracker GasBuddy.com.

But finding gas has been a problem in many spots served by the pipeline. In parts of Virginia and Maryland, motorists are waiting as long as five hours to buy gas, said John Patrick, Liberty Petroleum Corp.’s chief operating officer. Some drivers are making the shortage worse by topping off even when tanks are three-quarters full, he said.

Some fuel stations are selling “three or four times as much gasoline that they normally sell in a given day, because people do panic,” said Tom Kloza, an analyst with Standard & Poor’s Oil Price Information Service. “It becomes a self-fulfilling prophecy.”

The pipeline runs from the Texas Gulf Coast to the New York metropolitan area. The states most dependent on the pipeline include Alabama, Georgia, Tennessee and the Carolinas, Kloza said.

Even as the White House relaxed some environmental rules to allow gasoline to flow in from other regions, by Tuesday evening about 30% of the service stations were out of fuel in Atlanta, Charlotte, N.C., and upstate South Carolina, said Patrick De Haan, GasBuddy’s head of petroleum analysis. Fuel outages had spread to 10.3% of all North Carolina stations, 8% in Georgia and 6.9% in Virginia, according to GasBuddy, which was having trouble keeping up with record usage on its app and website.

Although average price increases haven’t been that large, the pressure is all upward, he said, as gulf refineries throttle back “because there’s nowhere to go with the refined product” in the absence of the Colonial Pipeline.

Total SE and Citgo Petroleum Corp. are among refiners that have reduced fuel production in response to the pipeline shutdown. Others — including Valero Energy Corp., Phillips 66 and Marathon Petroleum Corp. — are renting tankers in the Gulf of Mexico to hold excess gasoline and diesel for as long as 40 days, people familiar with the matter told Bloomberg.

So why have California prices increased? After all, the Golden State is a virtual fuel island with a unique cleaner-burning blend not usually made by other states’ refineries. California’s average price Tuesday was even higher than in Hawaii ($3.83 a gallon), an actual island.

“Our prices are increasing primarily due to increased local demand and refinery issues,” said Jeffrey Spring, spokesperson for the Automobile Club of Southern California. “We have had some flaring issues with local refineries during maintenance so production isn’t as robust as it might otherwise be.”

The stronger fuel consumption reflects a mixture of more people commuting to work, shopping and going out to eat on top of the typical travel use as Memorial Day nears, Spring said.

In addition, oil prices are above $65 a barrel, which is twice what they were a year ago, and the state made the annual April 1 switch to summer gasoline, which is more difficult and costly to make, he said.

Air carriers are being affected because the Colonial Pipeline also carries jet fuel.

American Airlines rerouted two long-haul flights from Charlotte, N.C., because of possible shortages. Passengers flying to Honolulu from the East and Southeast are having to change planes in Dallas, and those heading to London are stopping in Boston to refuel.

Southwest and United Airlines flights carried extra fuel on flights to Nashville, Baltimore and some other airports in case jet fuel was unavailable. Airlines usually load only enough fuel for a single flight, because topping off adds to the plane’s weight and hurts fuel economy.

Meanwhile, federal transportation regulators took the first step toward waiving rules that prohibit foreign-flagged and -staffed ships from hauling products from one U.S. port to another. Virginia followed North Carolina in declaring a state of emergency, and Georgia temporarily waived sales tax on gasoline.

The Colonial Pipeline each day ships about 2.5 million barrels, or about 105 million gallons, of gasoline, diesel and jet fuel. That amount exceeds the entire daily oil consumption of Germany.

The Associated Press and Bloomberg were used in compiling this report.

Tags: Los Angeles News
Previous Story
Snap suspends anonymous Q&A apps Yolo and LMK after lawsuit over teen’s death
Next Story
Inflation is back. How high and how long will prices go up?