A $650-million studio project is proposed for downtown L.A.

A $650-million studio project is proposed for downtown L.A. 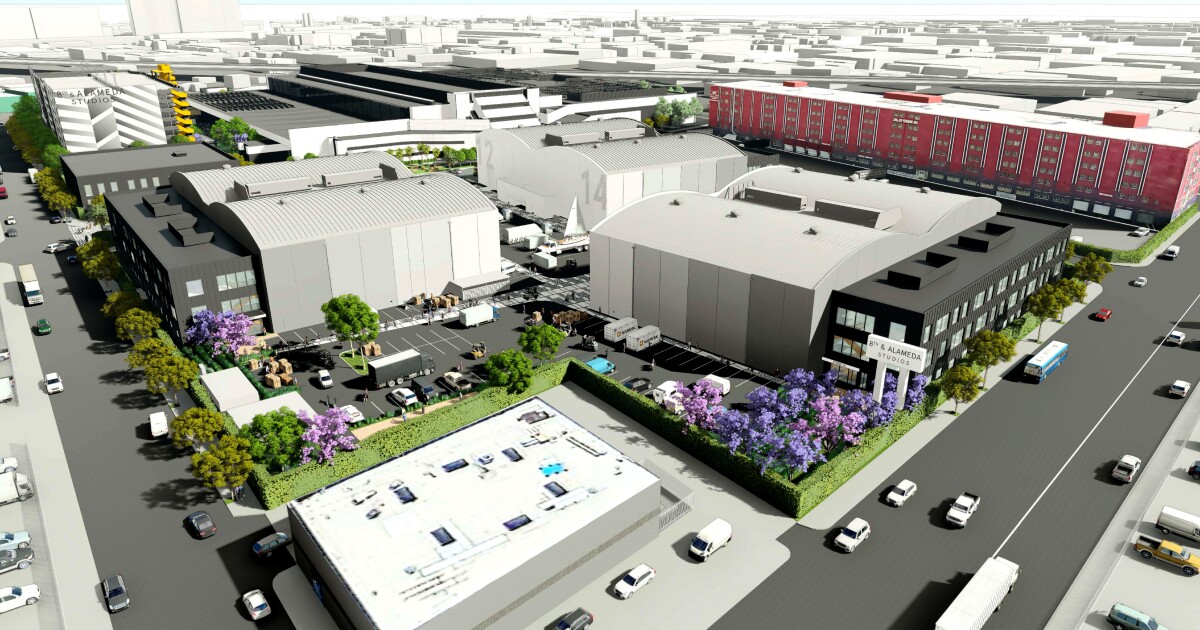 The owners of the sprawling plant where the Los Angeles Times is printed plan to redevelop the site near the Arts District in downtown into a Hollywood-style lot with 17 soundstages to meet strong regional demand for movie and television production facilities.

The Times’ landlord, Atlas Capital Group, said it would file a proposal with the city Wednesday to build soundstages on parking lots around the plant on Olympic Boulevard as The Times continues to print papers there.

If the city approves the $650-million project, a second phase of development would eventually convert the cavernous 1980s-era building where printing presses now roll daily into soundstages after The Times departs. The Times said its lease on the printing facility may be extended for years, however.

“We appreciate the consideration that Atlas Capital has given to the Los Angeles Times and our print production facility … and that we have the opportunity to remain in that location without any disruption to our operations well into the future,” Times spokeswoman Hillary Manning said.

The Times’ lease on the printing plant expires at the end of 2023, according to real estate data provider CoStar, but The Times has the option to renew its lease at prevailing market rates for at least a decade, according to a real estate expert familiar with the terms.

Developer and landlord Atlas Capital, which has offices in New York and Los Angeles, bought the 26-acre printing facility for more than $240 million in 2019.

The Olympic printing plant near the 10 Freeway and Alameda Street was built by the newspaper in the late 1980s to replace printing operations at its downtown headquarters. The Times is now based in El Segundo.

The Times became a tenant in the printing plant after the Chapter 11 bankruptcy reorganization of its then-owner Tribune Co., which ended in a 2012 agreement with creditors that spun off Tribune’s real estate holdings into a separate company.

In recent years, the industrial neighborhood where the printing facility lies has enjoyed a run-up in property values as the nearby Arts and Fashion districts have seen billions of dollars’ worth of new residential, office and retail projects.

Just a few blocks from the printing plant, Atlas is developing the Row DTLA on Alameda Street, where Atlas Capital and its partners are turning 2 million square feet of historic warehouses into offices, restaurants and stores while the area still serves as a hub for the local produce industry.

Last month, Denver developer Continuum Partners announced plans for a $2-billion mega-project on the site of a cold storage plant near the north end of the Arts District that would include housing, offices, a hotel and shops.

Atlas Capital’s 8th and Alameda Studios would have support facilities for entertainment creators in addition to the 17 soundstages. There would be more than 300,000 square feet of production workspace, 212,300 square feet of offices along with screening theaters, fitness amenities and a nine-story parking garage.

Five new structures would be built on the site’s large parking lot that would account for a third of the project’s square footage. The buildings would include six soundstages, a mill shop for scenery and prop design, and the garage — all built first to minimize disruption of printing operations.

Longer term, the bulk of the project would be anchored in the repurposed printing plant, which has high ceilings and is largely free of support columns. The plant would be redeveloped into 11 soundstages, production support, executive offices, a full-service restaurant with an outdoor patio, a commissary, a café and a fitness center.

Atlas Capital hopes to start work in spring 2022 on the first phase of the project, which would take about two years to complete, co-founder Jeffrey A. Goldberger said. The studio would bring more employment to the neighborhood.

“From start to finish, this project will create hundreds of short-term construction jobs and more than a thousand permanent movie, television and sound production-related jobs while resulting in no displacement of residents, housing or small businesses,” Goldberger said in a statement.

Soundstages are one of the hottest categories in commercial real estate as entertainment production keeps rising. The surge in video-on-demand streaming provoked “an insatiable appetite” for media-oriented real estate such as studios and offices, according to real estate brokerage CBRE.

The Los Angeles area already ranks as the world’s leader in soundstage capacity with more than 5.2 million square feet of certified space, FilmLA data show. Local soundstages have remained leased during the pandemic; location shoots, which had dwindled to a trickle, are mounting a comeback.

This month Los Angeles real estate developer David Simon announced plans for a new $450-million independent studio in Hollywood with five soundstages and support facilities including offices and bungalows for entertainment creators. It would be called Echelon Studios and would replace a long-closed Sears store and parking lot on Santa Monica Boulevard west of the 101 Freeway.

The owner of Television City, formerly operated by CBS, announced plans in March to make $1.25 billion worth of improvements to the Los Angeles lot, including raising the number of soundstages to at least 15, from eight, along with production support facilities and offices for rent.