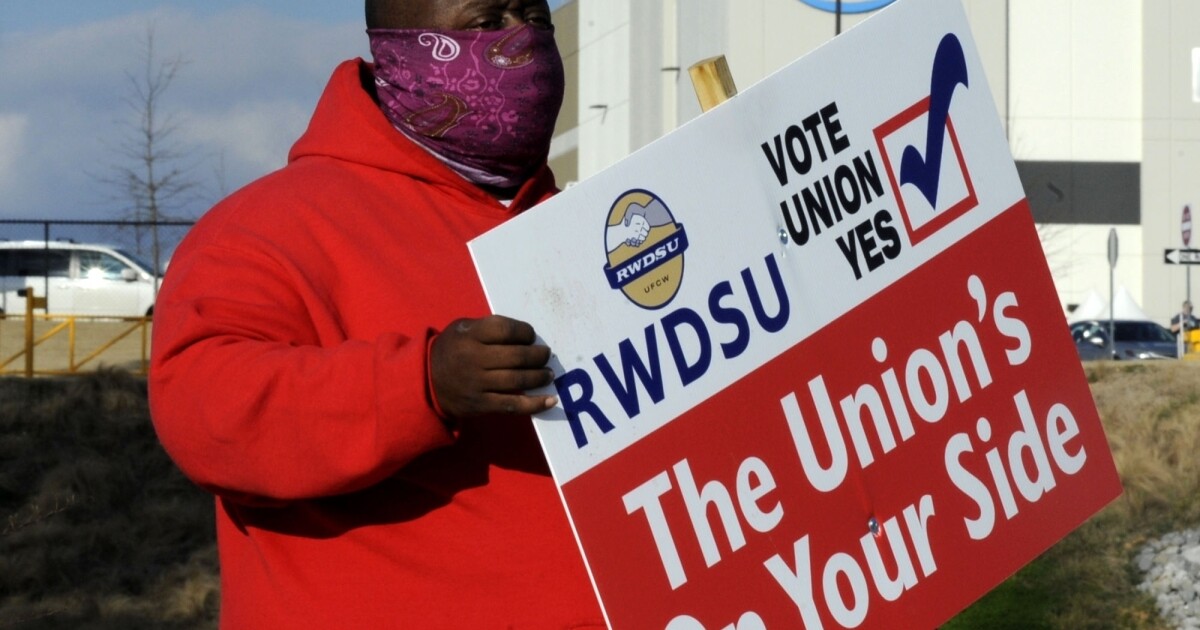 Amazon workers at an Alabama warehouse have voted against unionizing, a significant blow to a campaign that pitted union activists against one of the nation’s most powerful employers and had appeared poised to reenergize the American labor movement.

About 29% of eligible tallied votes were yes votes, not including contested ballots, according to results announced Friday by the National Labor Relations Board, which oversaw the process. Workers cast 1,798 votes against joining the Retail, Wholesale and Department Store Union, which led the effort to unionize employees at the facility in Bessemer, Ala., and 738 workers voted to join the union.

It was the closest Amazon workers anywhere in the U.S. had come to a union — surprisingly, in a Deep South, right-to-work state that bans labor unions from compelling workers to join. In Bessemer, worker concerns over the company’s relentless productivity goals converged with the racial equity movement to set in motion one of the most closely watched American union drives in recent history.

Some 5,876 warehouse workers were eligible to cast ballots by mail-in vote starting in February.

The result came after a days-long count livestreamed online. For nearly a week, the labor board had reviewed and certified all cast ballots behind closed doors. It set aside 505 contested ballots, which were not included in the final tally. The union said the majority were contested by Amazon. The labor board determined there weren’t enough contested ballots to affect the election result.

The union said it will file with the labor board to challenge the outcome, which it characterized as the result of intimidation and unfair practices by Amazon during the campaign. Amazon on Friday disputed union messaging that it had unfairly influenced the vote, and thanked the Bessemer workers for participating.

The chasm reflected the dual reality that many Amazon workers say they navigate: on one hand, earning higher than minimum wage, with benefits, at one of the world’s most influential companies at a precarious time for the economy and jobs; and on the other hand, enduring the exacting control and pace of work in warehouses that Amazon has come to be known for, to meet the quick delivery goals customers have come to expect.

Unionization would have had significant effects on Amazon’s operations, including potentially paving the path for wider worker organization at the behemoth company.

The loss deals a blow to the union and the momentum it had generated for labor activism. The organizing effort at Bessemer rode a wave of publicity uncommon in organizing, fueled by the spotlight that the pandemic has put on income and racial disparities. Warehouse workers were among the nation’s front-line workforce, risking illness on the job as consumer demand boomed during the pandemic.

Some experts said the defeat reflected historical weaknesses in U.S. labor law, the difficulty of uniting workers in a weakened economy, and the political challenge of checking corporations that espouse progressive values even as they aggressively oppose unions.

“The mythology is ‘We’re really progressive, we’re crunchy, we’re Democrat, we believe in labor’s dignity,’” said Robin D.G. Kelley, a historian at UCLA. “And yet, it’s one of the worst workplaces in the country, just in terms of physical brutality on the body,” Kelley said of Amazon.

Still, labor historians said the very effort marked an inflection point in the relationship between labor and the tech industry, which has grown in profits and influence while the workers who make, package and deliver its products reap disproportionately little of the gains.

“They can’t put the genie back in the bottle,” Kelley said. The union campaign and Amazon public relations counteroffensive it provoked have made the company “vulnerable as an empire,” he said.

Amazon representatives have said that they don’t believe the union’s position represents the majority of company employees, and that workers choose Amazon because of the stable compensation package and benefits it offers.

Among its main rebuttals: Amazon pays double Alabama’s minimum wage, offers medical and dental benefits, and — beyond its own workplace — supports a congressional increase in the minimum wage.

“It’s easy to predict the union will say that Amazon won this election because we intimidated employees, but that’s not true,” a company statement said, adding, “our employees made the choice to vote against joining a union.”

At a news conference organized by the company, William Stokes, a process assistant at the warehouse who opposed the union drive, said that union organizers failed to convince him and other workers that it would significantly boost their pay or working conditions.

“When you go down the list of all the benefits that Amazon has, versus what this union here has traditionally negotiated, it’s just better with what we have now,” Stokes said. He and other employees speaking at the news conference said they still had concerns they wanted Amazon to address, including better training for new and inexperienced managers: “We just feel like we can do it without the union. Why pay the union to do what we can do ourselves?”

“We’ve said from Day One of this: Amazon is not perfect,” he said.

As news updates of the vote tally flashed on her cellphone Friday, Jasmine Thomas felt regret for voting against unionization.

The 30-year-old order packer said she voted no in mid-March, figuring the union wouldn’t be able to secure more for her or other workers. She said she was repeatedly pressed by supervisors to attend mandatory company meetings against the union and felt pressured to vote against it.

“I really should have voted yes,” she said in an interview. “Since I voted no, I’m starting to notice things. They ask for so much of us every day…. You feel like a robot.”

For months, Thomas had been undecided. The work was strenuous and fast-paced, but she earned $5 an hour more than at her last job at Walmart and watched co-workers move up in the company. She was unsure even after the company’s union counteroffensive ramped up. “They pushed those meetings on us. I had at least two,” she said. “It influenced me.”

Workers have reported that the company posted anti-union fliers in the facility’s bathrooms and break rooms. Amazon also petitioned the county to shorten stoplights at an intersection in front of the facility, which organizers have said they suspected was a way to block them from discussing the union effort with incoming workers. Amazon denies that was the intention, saying it was a standard request it had made at other locations.

The Bessemer vote is only the second among Amazon workers in the U.S. In 2014, a small group of technical workers responsible for maintaining and repairing equipment at an Amazon warehouse in Middletown, Del., mounted a union drive. That group voted overwhelmingly, by 21 to 6, against forming a union.

Two years later, the company agreed to a settlement with the NLRB over allegations by the International Assn. of Machinists and Aerospace Workers around the Delaware union drive. The association said Amazon surveilled, interrogated and threatened workers involved in organizing at the time.

Retail, Wholesale and Department Store Union President Stuart Appelbaum said in a video news conference Friday that the Bessemer vote results “demonstrate the powerful impact of employer intimidation and interference.” If the labor board agrees with the union’s allegations, it could order a re-do of the election to remedy the disputes. Just evaluating the allegations could take several months, labor experts said.

The union has homed in on emails, which it obtained in a Freedom of Information Act request, among U.S. Postal Service employees earlier this year that appear to show Amazon pressured the agency to install a mailbox outside the warehouse. The union says that action violates labor laws.

William B. Gould IV, a Stanford professor emeritus specializing in labor law, said that action would be “striking” because it could lead workers to believe Amazon was somehow in charge of the electoral process. “If the worker believes the employer controls the process, they’re going to defer to employer’s views.”

Margaret O’Mara, a University of Washington professor who researches the history of technology companies, said the design of work at Amazon is not conducive to organizing: Workers have exceptionally high injury and turnover rates. Combined with a lack of exposure to unions, that made building genuine momentum difficult, O’Mara and other experts said.

“People don’t have a history of belonging to a union or having families that belong to unions. There are a lot of workers who are like: ‘Wait, what does this get me?’ ” O’Mara said.

In securing a vote, Bessemer workers had defied expectations and broken a significant barrier, said Michael Innis-Jiménez, a professor of American studies at the University of Alabama, who called the result “a setback” rather than a defeat.

Tags: Los Angeles News
Previous Story
Column: There’s a racial gap in marketing by banks and payday lenders, study finds
Next Story
Column: What the union defeat at Amazon’s Bessemer warehouse means for the future of labor in America