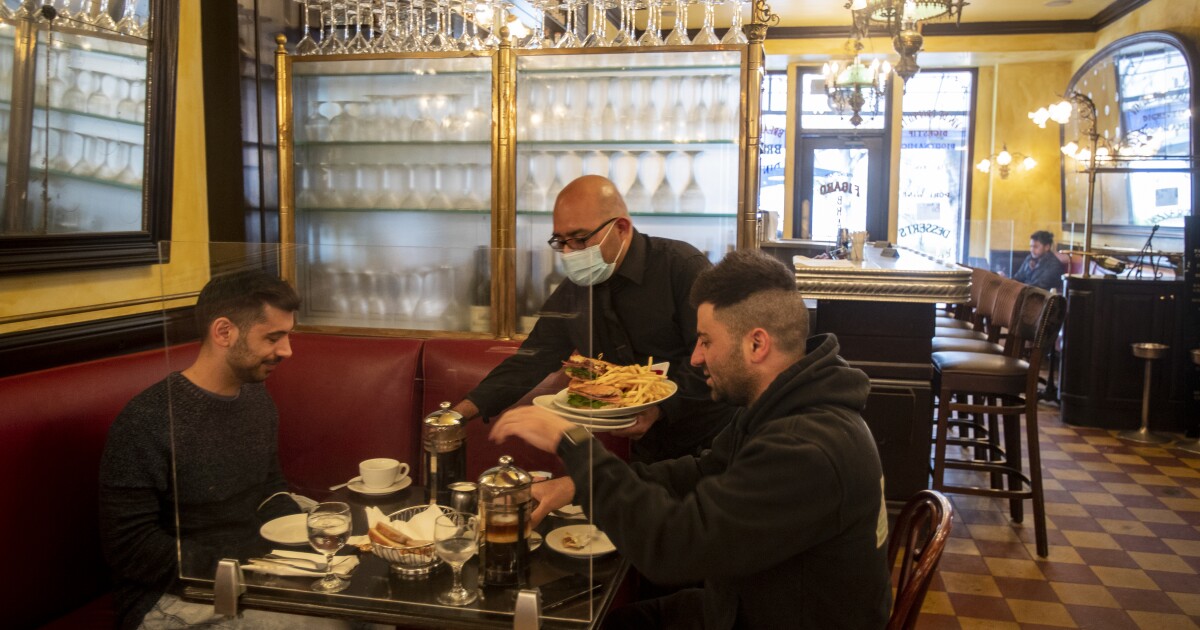 Maxwell Reis drove to work Monday morning at Gracias Madre in West Hollywood with the unsettling feeling that things were moving too fast.

As restaurants across Los Angeles reopen to indoor diners, his workplace plans to open up 32 indoor seats Wednesday, the first time in roughly a year that people will eat inside there.

“I do think it’s incredibly rushed,” said Reis, the restaurant’s beverage director, referencing the county’s loosened restrictions on restaurants. He believes his restaurant can handle the shift to indoor dining safely, and is relieved to have received his first vaccine dose this month, presumably offering some protection against severe COVID-19. But the second dose is weeks away, “and now I need to be inside with people without their masks on.”

Waitstaff and workers at restaurants across Los Angeles County reopening to indoor diners starting Monday are bracing for uncertainty as they resume shifts inside for the first time since June.

Some are anxious about coming close to maskless customers. Some are eager to see their longtime regulars again. Many aren’t sure what to expect just yet, with so much changing, and fast, for both individuals and businesses as vaccinations ramp up and a semblance of normal life returns.

In-restaurant dining at 25% capacity returns in L.A. County alongside the resumption of indoor activities at gyms, movie theaters and other venues. That comes after California met its initial target of administering 2 million COVID-19 vaccinations in the hardest-hit and most disadvantaged areas. Food workers, including restaurant staff, became eligible for vaccinations in L.A. County on March 1.

As restrictions loosen, public health officials are warning about the risks of eating inside at restaurants, where the risk of COVID-19 spread remains significantly higher compared with outdoor activities. L.A. County requires that people dining indoors together live in the same household, while three households are allowed to gather when dining outdoors.

For people such as Reis, the risk isn’t confined to himself. Reis lives with a roommate who helps take care of relatives with health issues. “My roommate was cool with me wearing a face shield and serving outside, but this is a whole different ballgame.”

John Gamboa, a cashier at La Brea Bakery, got his first vaccine dose last Tuesday and is “a little worried” about coming into closer contact with more people. He and colleagues get a temperature check each morning. A sensor at the door checks customers’ temperatures as they walk in. When the virus surged in the late summer and fall, those measures didn’t feel protective enough, he said.

Now, the continued vaccination effort brings him some reassurance. “That’s giving me a sense of security,” said Gamboa, whose job involves face-to-face interaction with customers.

“Maybe before I would have been more anxious about working indoors, when we were seeing like 20,000 cases per day,” said Tommaso Staico, a waiter at Italian restaurant Forma in Santa Monica. “But I have a face shield and a mask, and the vaccine. It’s a start.”

Many workers are awaiting vaccine protection. Those who already have it are greeting customers with greater relief.

“I’ll feel a lot better after Wednesday,” said Nancy Cooper, a waitress for 21 years at Maria’s Italian Kitchen in Pasadena. She is scheduled for her first vaccine dose that day.

“It feels great,” said Yecica Cervantes, a fully vaccinated waitress at Paco’s Mexican Restaurant in Arcadia. She wears a cloth mask and a plastic shield over her face at work. “It’s amazing that we get a chance to reopen again,” she said Monday morning as the restaurant readied to open its doors.

She said she misses her co-workers but is excited to see many of her regular customers return.

Some businesses weren’t yet prepared to seat and serve people indoors.

In Westwood, tables and chairs at Ministry of Coffee remained stacked in a corner while employees took orders from a counter by the front door. They said they were not immediately planning to reintroduce indoor seating.

Down the street at the Mexican-inspired chain Tocaya Organica, general manager Jessie Lona said preparations were underway for indoor dining to open Tuesday — for the first time in more than a year.

The restaurant’s approximately 20-member staff dwindled by about 75% in the pandemic’s earliest days. Lona said some workers are being hired back now: “We’re increasing our staff little by little. We’ll see how things go.”

Business closures have dealt a major blow to the L.A. economy. Job losses have been steep in the restaurant and food industry, the county’s largest private-sector employer.

Yasmin Karimi is back to work this month at Toranj, a Persian restaurant in Westwood, after collecting unemployment checks for several months. She was laid off a year ago, when she got a text from her boss telling her to stay home as Los Angeles went into lockdown and restaurants shuttered.

Karimi said serving outdoors in the relatively chilly air the last week has been frustrating for both waitstaff and customers. “Yesterday it was windy, and people were trying to come inside. They didn’t want to wait even one more day,” she said.

Farinaz Shirazi, who owns the business with her brother, said she helped Karimi and about 10 other staff members, including cooks, waiters and busboys, secure vaccine appointments last week through the state’s My Turn website.

The family opened the restaurant five months before the pandemic, making it hard to market its take-out offerings to customers. The family is behind on rent, and Shirazi has been frustrated by fees on online orders by third-party platforms. “We suffered a lot,” she said.

She’s feeling hopeful with the chance to ramp up business again. “We feel really excited and a lot more safe. And we hope our customers are getting vaccinated too.”

In Los Feliz, at local mainstay Figaro Bistrot, tables on the sidewalk were packed Monday afternoon but inside only Jairo Ramirez sat with his laptop and a cup of tea. He peered at the wooden tables around him, each shielded by plexiglass barriers.

Ramirez said the sight was somewhat startling. “I’m not sure how to act — should I take my mask off or leave it on?” he said. “It will take a while to acclimate, to feel like things are safe.”

Waiter Boris Macquin said many customers have gotten used to sitting outdoors and it remains to be seen how many may venture back inside. Macquin got his first vaccine dose last week and said he has felt comfortable with the restaurant’s safety protocols.

“We’ve followed all the rules, and I haven’t gotten COVID so far so it seems to have worked,” he said. As for the restaurant, he said it’s not the first time this last year that businesses are maneuvering a quick reopening. “This time, I think it will stick.”