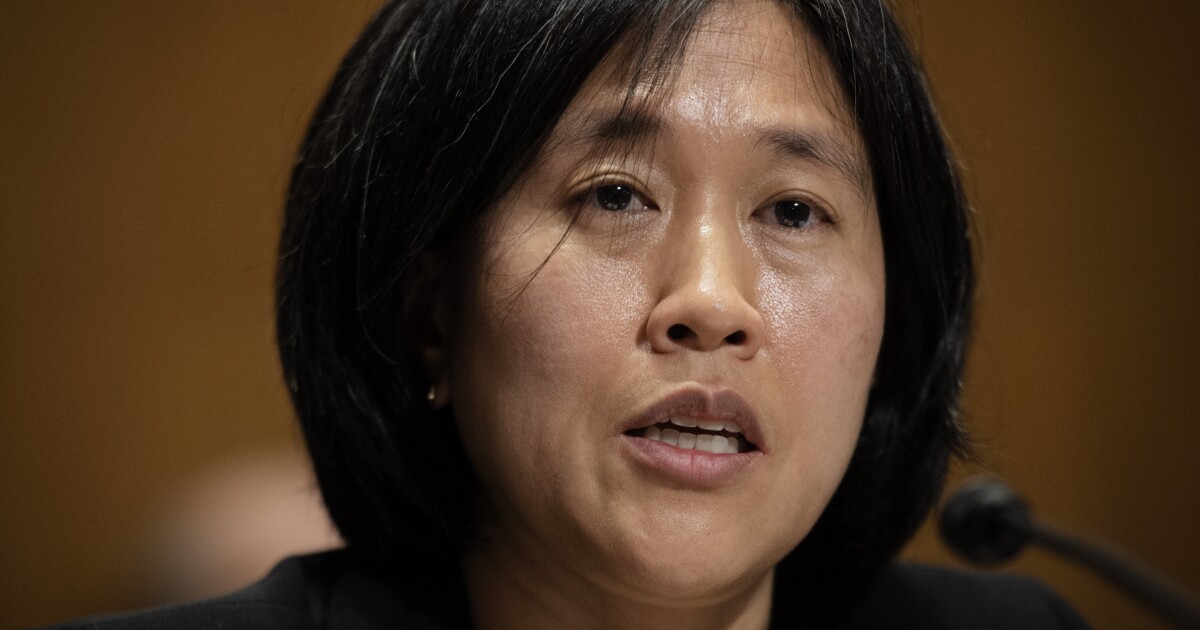 The Biden administration, breaking its silence on America’s tense relations with China, indicated that it is prepared to take a more forceful approach in pressuring Beijing to fulfill its commitments under a trade agreement reached with former President Trump.

The strategy was revealed by senior Biden administration officials in a call with reporters ahead of a speech Monday morning by U.S. Trade Representative Katherine Tai that analysts described as an opening salvo in U.S. efforts to combat an increasingly difficult economic and political landscape as China has become more assertive globally.

Biden administration officials suggested Sunday that after conducting a months-long review of U.S.-China trade relations, they have concluded that China is unlikely to respond satisfactorily to core U.S. concerns about its mercantile economic practices, such as propping up state-owned firms and maintaining other barriers that undercut foreign rivals and distort markets.

The officials left open the possibility that the U.S. government may utilize Trump’s preferred tool in trade disputes with Beijing: tariffs.

“If China were to change, we would welcome that, but we do not expect them to,” said a senior administration official in the briefing with reporters.

In previewing Tai’s remarks, administration officials said she would detail how China’s trade policies have hurt American workers and industries, as well as outline how Beijing has failed to follow through on promises to reform its economic practices.

The officials said Tai would “soon” start by engaging with her counterpart in China, but beyond diplomacy, it wasn’t clear what additional measures the administration has for leverage.

“We will see how China responds to what Ambassador Tai details tomorrow, and we will adjust accordingly,” said an administration official.

Biden officials sought to differentiate his approach from what they described as Trump’s chaotic and poorly targeted handling of China, which included two years of a tit-for-tat trade war that left higher tariffs on about $350 billion worth of Chinese imported goods that has been borne by American consumers and businesses, experts say.

President Biden and his economic officials have been working with allies and partners to develop a trade strategy for China, a contrast to the Trump administration’s unilateral approach.

Biden, however, has not lifted Trump’s tariffs on China-made goods, although administration officials said they would restart a process in which targeted goods could be excluded from the higher duties. The officials speaking Sunday emphasized that they were not opposed to applying new tariffs in seeking to ensure that China complies with its commitments.

“We are not taking any tools off the table,” a Biden official said when asked whether new tariffs could be applied.

Biden has cast the challenge from China in stark terms, calling it a battle between autocracy and democracy. He has said the competition begins with the U.S. shoring up its weaknesses at home in manufacturing, infrastructure and research. But the president faces heavy political pressure to act forcefully in dealing with China.

“Everything Biden is getting from the Congress, from both parties, is be tough, take a hardline approach,” said William Reinsch, a trade expert at the Center for Strategic and International Studies, where Tai will speak Monday morning.

For the administration, the immediate issue is the Phase 1 trade deal, which Trump announced in January 2020. The agreement calls for China to increase its purchases of U.S. goods and services by about $200 billion over two years. It also pledged to open up markets and improve protection of intellectual property.

But China was running more than 30% short of its promised purchases through August, said Chad Bown, an economist at the Peterson Institute for International Economics who has been tracking the trade flows. China is doing relatively well in terms of imports of U.S. farm goods, Bown said, and Beijing could make big purchases of U.S. aircraft and other manufactured goods to close the gap. But even if such large deals occur, analysts doubt China can meet its commitments by the end of the year.

China has made good on some pledges related to market access, including removing barriers for financial services and some U.S. fruits and meat products.

The Phase 1 trade agreement includes an enforcement mechanism, but it also has a provision that might allow China to claim that it could not meet its obligations due to the unforeseen circumstances caused by the COVID-19 pandemic.

“It you’re the Biden folks, it’s not a great deal to inherit,” said Bown. “You don’t want to be seen signing trade agreements with countries that then don’t get enforced. But they’re basically stuck without much leverage.”

The Phase 1 deal was meant as an initial agreement that would lead to talks involving more substantive economic and trade issues, but senior Biden officials said Sunday that they don’t foresee negotiating a Phase 2 deal.