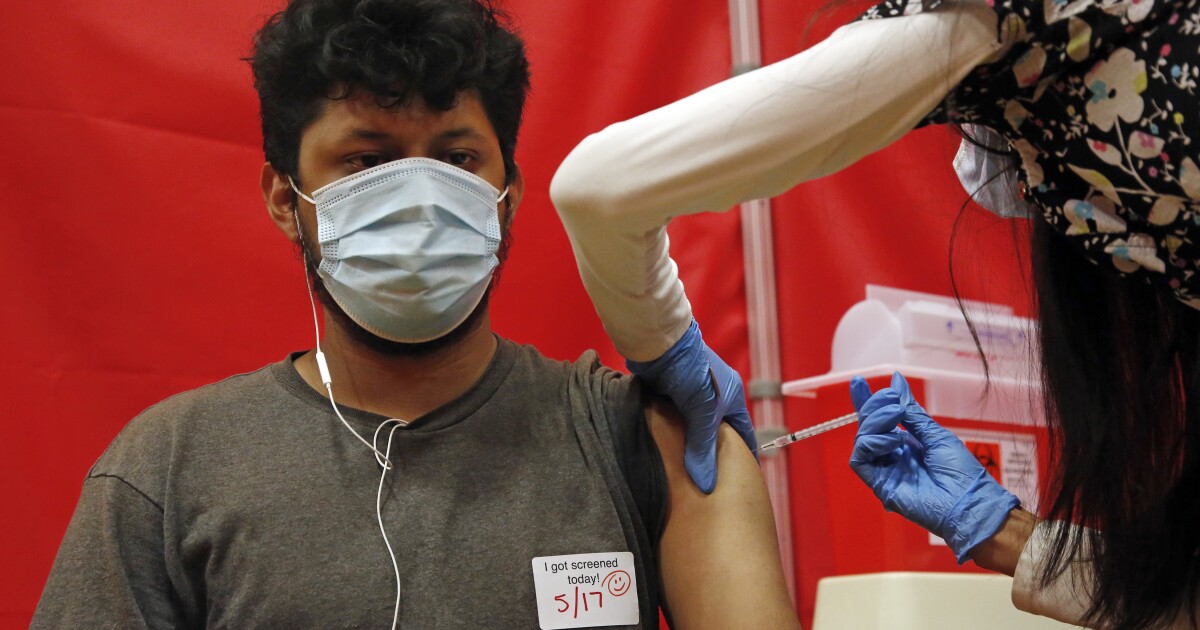 California is considering dropping mask and physical distancing rules for employees at work sites if everyone there is fully vaccinated, another major step in moving back to normal as COVID-19 cases continue to plummet.

The discussions come as employers are considering plans to bring employees back into workplaces, especially those that went to remote work during the pandemic. It also underscores the growing optimism that the vaccine could bring major changes fairly soon.

“For the first time in a long time, I feel optimistic,” Dr. Sara Cody, the Santa Clara County health officer and public health director, and a key architect of the nation’s first regional stay-at-home order, told reporters. “For a while, it seemed uncertain to me whether the vaccines or the variants would win. And I think that Team Vaccine is in the lead, holding the lead and will win.”

California’s Occupational Safety and Health Standards Board is expected to weigh further steps to relax masking and physical distancing requirements for vaccinated workers.

Among proposed changes the board will weigh Thursday morning: dropping a requirement for workers to wear masks when everyone in a room is fully vaccinated and does not have COVID-19 symptoms; and no longer requiring physical distancing at locations at which all employees are fully vaccinated.

Should the board approve the proposal, it will be submitted to California’s Office of Administrative Law, which will have 10 days to review it and make a decision on the proposed regulation.

Current California emergency workplace health and safety regulations, which went into effect Nov. 30, require that workers wear masks when indoors, except when a worker is alone in a room or is eating or drinking but must be at least six feet away from other workers and outside air supply has been maximized. Workers must also wear a mask outdoors when less than six feet away from someone else.

Current rules also generally require workers be separated from each other by at least six feet.

The proposed change is consistent with California’s existing mask rules for non-workplace settings, which already allow fully vaccinated people to gather in a room — say, in a home — without masks or physical distancing.

It remains unclear which workplaces would be impacted. Some employers are requiring vaccinations as they reopen offices. But retailers have generally not required customers to be vaccinated when they shop.

The workplace safety proposal is far stricter than the recent guidance issued by the U.S. Centers for Disease Control and Prevention, which offered the recommendation last week that vaccinated people no longer need to wear masks in almost all indoor or outdoor settings, with officials expressing confidence in the extraordinary effectiveness of the vaccines to protect against illness and infection.

Some infectious diseases experts suggested the proposed relaxation in California’s workplaces could be loosened further.

They pointed out that fully vaccinated people are highly protected from the coronavirus, even when in close contact with unvaccinated people. Even in the rare instance that a vaccinated person still gets infected anyway, chances are they will either show no symptoms or have very mild symptoms, and are unlikely to transmit the virus to other people.

“I feel that they are trying to be conservative,” said Dr. Robert Kim-Farley, medical epidemiologist and infectious diseases expert at the UCLA Fielding School of Public Health. “I think it’s very likely that the board, as we go out further and have more and more people vaccinated and go to extremely low levels of disease circulating in the population, I would anticipate that they would revisit these recommendations.”

Kim-Farley said he’s supportive of California’s plan to move forward with relaxing of more restrictions around June 15, when the state intends fully reopen the economy and adapt and phase in the CDC’s relaxed guidance on masks.

Importantly, the chances people today in California are likely to get infected are far, far lower than they were at the height of the pandemic. California already has one of the lowest daily coronavirus case rates in the nation. And so, Dr. Monica Gandhi, infectious diseases expert at UC San Francisco, said as a vaccinated person, while she wouldn’t be unmasked in a dense packed crowd in a place with a high case rate, she would feel fine doing so right now in San Francisco, which has a very low prevalence of virus now.

Notably, scientists in the U.K. — buoyed by the nation’s high rate of vaccination — decided to embark on an unusual experiment in Liverpool, where they allowed thousands of people who tested negative for the virus to attend a crowded music festival with no masks or physical distancing.

More than two weeks later, “they saw no uptick in cases in Liverpool,” Gandhi said.

That’s why, Gandhi said, officials should be thinking about how to change rules for when there are vaccinated and unvaccinated workers in the same room. Gandhi said one idea is to drop mask mandates once a certain percentage of residents have received at least one dose of vaccine — like 70% — and the daily per capita number of coronavirus cases has fallen to, say, between 2 and 3 cases per 100,000 residents.

About 51% of California’s residents have received at least one dose of vaccine, and the state has a daily case rate over the past week of 3.6 coronavirus cases per 100,000 residents.

Setting such benchmarks might help ease public concern about moving too fast to ease mask mandates, Gandhi said. At some point, officials have “to acknowledge that life can go back to normal.”

The potential move by the California Occupational Safety and Health Standards Board could come as even the most cautious local public health officials in California are endorsing a growing sense of normalcy.

More studies are showing that the COVID-19 vaccines are effective against variants. And just this week, two of the state’s most populous counties — Orange and Santa Clara — joined the least restrictive tier of California’s four-part, color-coded reopening roadmap, allowing for the widest possible business openings for now.

Cody added: “It’s really important for all of us to understand and really rejoice that we now have evidence that vaccinated people are very unlikely to spread COVID.”

L.A. County and Santa Clara County, the home of Silicon Valley and home to the first documented COVID-19 death in the nation, now have rock-bottom recent test positivity rates — just 0.5%, even better than the statewide positivity rate of 0.9%

Santa Clara County has among the highest vaccination rates in the state, with 64% of residents there having received at least one dose; the rate statewide and in L.A. County is 51%.

As a result, Santa Clara County relaxed one of the most stringent public health orders in the state. Effective Wednesday, the county dropped a requirement that businesses maximize the number of workers who work remotely.

In L.A. County, health officials still say everyone who can work from home needs to be directed to do so. But as of May 5, L.A. County allowed nonessential offices to reopen up to 75% of capacity if not all staff have been fully vaccinated, as long as workers can maintain a six-foot distance from other people. San Francisco on May 6 expanded the capacity of reopened offices to 50% of capacity, not including vaccinated workers.

In San Francisco, 68% of the city’s residents have received at least one dose, and public health director Dr. Grant Colfax said when 50% had done so, “you see dramatic changes in COVID-19 rates,” reducing infections and hospitalizations in a way consistent with the experience in Israel and the United Kingdom, the two nations with the highest COVID-19 vaccination rates in the world.

Although state officials still encourage that work be done remotely, counties in the least restrictive tiers, orange and yellow, are allowed to permit offices in nonessential fields to reopen with modifications.

Officials said it continues to be critical that more people get vaccinated. If vaccination levels remain too low, outbreaks could occur among clusters of people who remain unvaccinated.

And the more virus transmission that happens, the higher the risk that more mutations can be created, causing the introduction of possibly more transmissible variants. The end result could be more hospitalizations and deaths and a setback for the economy.

Slow vaccination rates in other countries that did relatively well in the first year of the pandemic have set the stage for fresh outbreaks. Taiwan, for instance, has now imposed strict lockdown measures; several hundred infections have been reported in the last week after months without any.

Japan, which is undergoing a fourth wave of infections, has failed to deliver shots at rates anywhere near other nations of similar economic standing. Less than 3% of Japan’s population of 126 million has been fully vaccinated.

Now, hospitals are hard pressed to cope. In Osaka, where the volume of weekly infections is the highest in the country, critical-care beds are nearly full. Between 15,000 and 17,000 patients are reportedly being left without medical care, and the Osaka governor has warned that fatality rates could continue to rise.

If half of a population is unvaccinated and they mingle with each other without wearing masks, “they will spread it to other people who are not yet vaccinated,” Ferrer said.

Times staff writer David Pierson in Singapore and special correspondents Ralph Jennings in Taipei and Hanako Lowry in Tokyo contributed to this report.