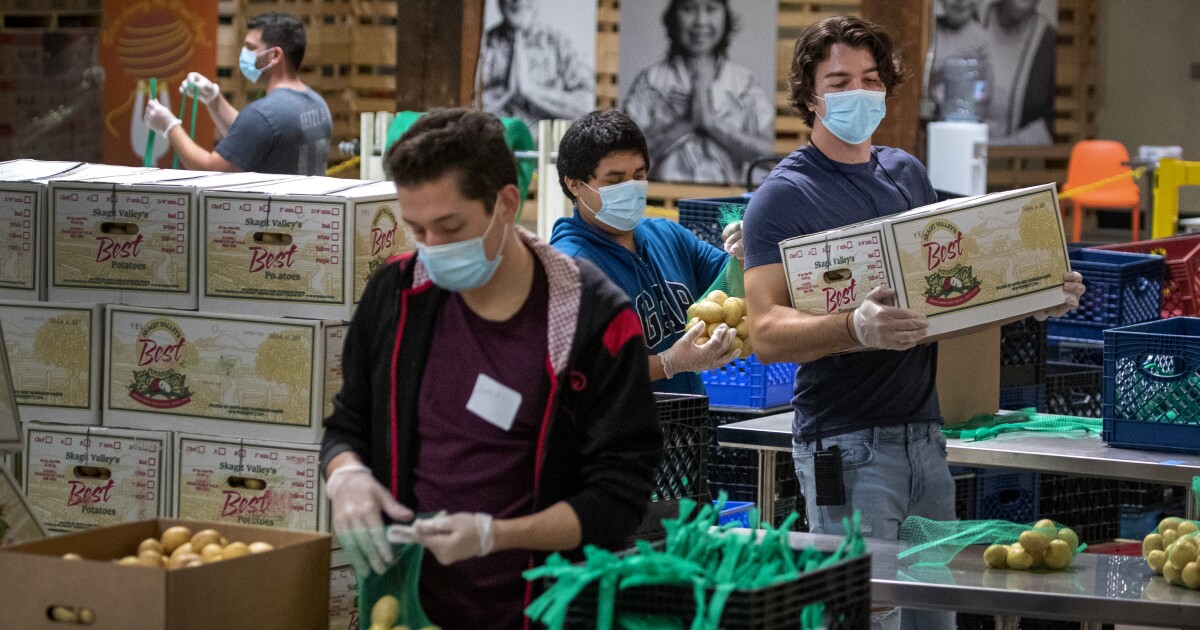 Californians who qualify for a $600 state stimulus payment could see the money arrive as soon as a month after filing their tax returns under a $7.6-billion COVID-19 economic relief package approved Monday by the state Legislature.

Crafted by Gov. Gavin Newsom and legislative leaders last week, the pandemic assistance plan also includes more than $2.1 billion in grants and fee waivers for small businesses. Those companies can soon apply for the grants, followed by an approval process that state officials estimate would take 45 days.

Another $2 billion in tax breaks for businesses is expected to be acted on by the Legislature later this week, which would bring the total package to $9.6 billion.

The stimulus assistance for residents earning $30,000 a year or less will come much quicker — four to five weeks on average after they file 2020 tax returns with the state Franchise Tax Board if they also sign up for direct deposit, said H.D. Palmer, a spokesman for the California Department of Finance. The wait could last as long as seven weeks for those receiving the $600 in a check from the state.

“This is such an important bill because it gives millions of hardworking Californians instant money that they so desperately need during this tough time, during this pandemic,” Assemblyman Phil Ting (D-San Francisco) said on Monday during the floor debate before the Legislature passed a half-dozen bills that make up the economic relief package. Newsom said he hoped to sign the measures on Tuesday.

Some 5.7 million payments totaling $2.3 billion will go to low-income Californians under the Golden State Stimulus program, which is aimed at helping those in the most dire financial straits, according to state Sen. Nancy Skinner (D-Berkeley).

“Our lower-wage workers have been disproportionately impacted,” said Skinner, chairwoman of the Senate Budget and Fiscal Review Committee.

The COVID-19 relief package was made possible by higher-than-expected tax revenues in California despite the economic hardships brought on by the pandemic.

Some 3.8 million of the payments will go to households that qualified for the state earned income tax credit for 2020, which is available to residents earning less than $30,000 annually.

About 565,000 stimulus payments will go to those with individual tax identification numbers who did not receive federal stimulus payments and whose income is below $75,000, many of whom are immigrants in the country illegally. Taxpayers with individual identification numbers who also qualify for California’s state earned income tax credit would receive a total of $1,200 in state stimulus.

The CalWorks payments will be placed on EBT cards and issued to participants by mid-April, although the timing could change based on the ability to automate the process, Palmer said. The timing and method of grant payments for those on SSI and SSP is still being worked out and is dependent on conversations with the federal Social Security Administration, he added.

The $600 stimulus checks for low-income residents could be enough to put food on the table for the month for a household and pay for utilities, according to Maeve Elise Brown, executive director of the advocacy group Housing and Economic Rights Advocates.

“It buys people time for us to begin to emerge from the pandemic shutdown,” Brown said. “This is $600 that could be the difference for some people between surviving or not surviving.”

The provision of the relief package that generated the most debate in legislative hearings was the proposal to provide stimulus checks for immigrants who are in the country illegally.

State Sen. Jim Nielsen (R-Gerber) questioned providing the money when the state budget, while flush now, could suffer problems in the future if the COVID-related recession continues.

“This budget is going to be creating long-term obligations to the undocumented,” Nielsen said during a legislative debate.

Skinner noted that the stimulus check to immigrants is a one-time payment, not a continuing budget obligation, while state Sen. Maria Elena Durazo (D-Los Angeles) said the proposal for immigrants and other low-income residents is important but does not go far enough.

“I think it’s a great step forward. It’s an acknowledgment of all these low-wage workers … that they are working hard and they have been disproportionately impacted through unemployment,” Durazo said. “I think there is room to include more who are still not covered either by our state or by the federal [programs].”

Advocates for immigrants said many would not get a stimulus check because they do not have individual taxpayer identification numbers , and noted that immigrants also cannot get unemployment benefits or federal stimulus.

“This doesn’t cover all of the relief they have been excluded from and we are creating inequality as a result,” California Immigrant Policy Center manager Sasha Feldstein told lawmakers during a budget hearing.

She noted that an immigrant household with two ITIN-filer parents and two children would be eligible for a maximum of $1,200 in state stimulus, which is about 21% of the federal relief they’ve been excluded from.

“More is needed to protect thousands of undocumented workers left out,” added Fanelly Millán, an organizer for the Pomona Economic Opportunity Center.

The relief package approved by the governor and Legislature also provides $2.1 billion in grants from $5,000 to $25,000, a program administered by California’s Office of the Small Business Advocate.

“This will assist qualified small businesses who have been devastated economically by the COVID pandemic,” said state Sen. Anna Caballero (D-Salinas), who authored the grant bill. “As we know, small businesses throughout the state have continued to struggle to survive during the stay-at-home orders.”

She cited a recent survey by the advocacy group Small Business Majority that found 35% of small businesses were three months from closing if they do not get additional financial help.

Assemblyman James Gallagher (R-Yuba City) said during Monday’s floor debate that the relief bill would not have needed to be as large as it was if the state had not forced businesses to close for so long.

“This governor arbitrarily and unilaterally decided to shut down mostly small business in this state and as a result many small businesses have already gone out of business,” Gallagher told his colleagues before he joined the bipartisan vote to support the business grants bill.

The Legislature’s approval of the grant money comes a few months after Newsom launched the program with an executive order that provided $500 million in grant money for 21,000 small businesses.

But the demand for the grants is greater than the money available. In the first round of grant awards, 350,000 small business filed applications, seeking more than $4.5 billion, officials said.

Businesses with an annual gross revenue of up to $2.5 million are eligible. Because not every applicant will be awarded a grant, requests are ranked and judged on criteria including whether the business is in an industry sector most affected by the pandemic.

The applications will also be scored to make sure there is wide geographic distribution and that businesses owned by people of color are fairly represented.

“Our commitment in that effort is to underserved communities and underrepresented communities, which means we are going to be very mindful of where those dollars go,” Newsom said Monday during a news conference in Arvin.

Once a business is notified that it has been selected for a grant, it will face additional verification requirements before the money is disbursed, according to Kaitlin Lewis, a state spokeswoman.

“All final awards will be completed within 45 business days of the close of a round and businesses are verified and paid on a rolling basis,” Lewis said.

A portion of the relief package for which a vote is scheduled later this week would allow companies to deduct up to $150,000 in expenses covered by loans from the federal Paycheck Protection Plan. More than 750,000 PPP loans were taken out by California small businesses, officials said.

Two years of fee relief will also be provided for roughly 59,000 restaurants and bars licensed through the state’s Department of Alcoholic Beverage Control, under the bills approved Monday. They normally pay annual fees ranging from $455 to $1,235. More than 550,000 barbering and cosmetology licenses will also have fees waived.

In addition, $50 million will go toward grants for cultural institutions that have suffered financially because of the pandemic. The package also includes grants to community college students, and additional money for childcare, food banks, diapers and housing for quarantined agricultural workers.