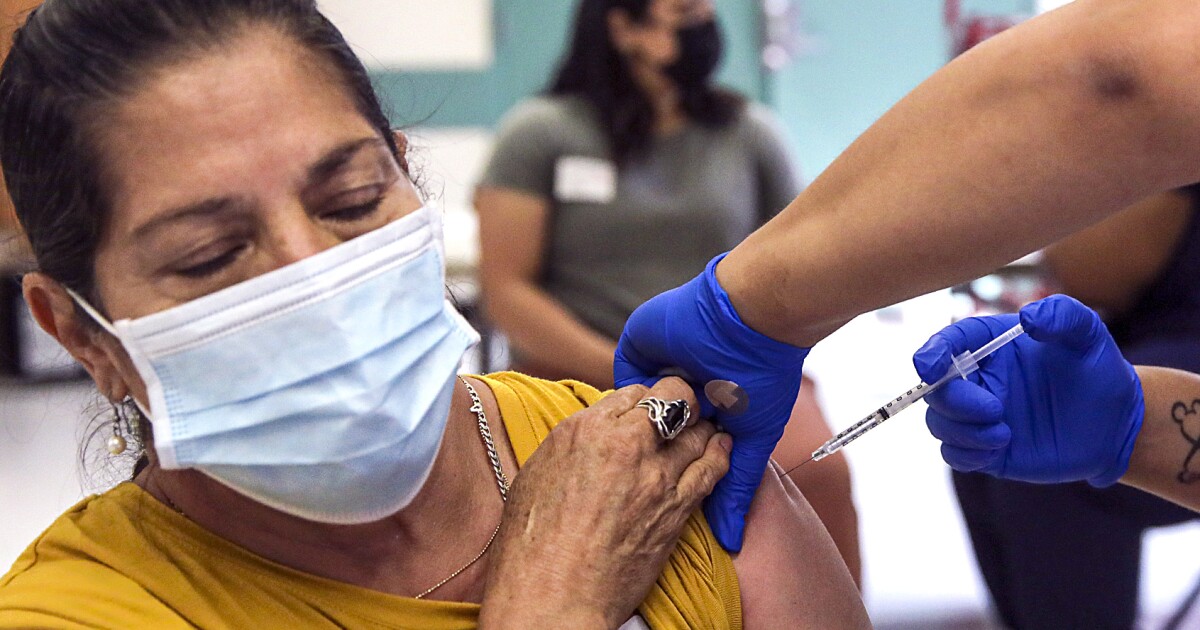 California has launched a COVID-19 vaccine verification system that provides digital replicas of the traditional wallet-size paper cards, in an effort that officials say will make it easier for residents to supply proof of inoculation if needed.

The new portal to access electronic records, officials said, is not the same as a vaccine “passport,” which has become politically controversial but rather a simple convenience that offers residents an alternative to the physical slips they might not want to carry around or may have lost.

Residents aren’t required to obtain the electronic records, officials stressed, and there are no settings where the state mandates residents provide proof of vaccination as the sole option for entry.

But in the wake of California’s economic reopening, it’s possible individual businesses or venues — or even county-level health officers — might opt to impose vaccine verification in certain cases, making a digital option all the more attractive.

“We’re looking for this to be rolled out to whoever wants to use them,” said Amy Tong, the state’s chief information officer and director of the California Department of Technology.

Everyone who’s been inoculated for COVID-19 should have received a white paper card from the Centers for Disease Control and Prevention that details where and when they got their shots, as well as their brand of vaccine.

The new electronic option provides the same information, as well as a QR Code that can be scanned to confirm its authenticity.

“This is really no different than someone’s vaccine card,” she told reporters. “It’s an optional tool for Californians to use to be a touch more convenient, and one of many ways people can show and verify that they’ve been vaccinated.”

“Obviously right now with the pandemic, folks are just wanting to have their specific COVID records. So this capability is building on the same space,” Tong said.

Once on the new state website, residents will be prompted to provide their name, date of birth, and an email or cellphone number they used when getting their vaccine.

Residents will also need to create a personal identification number that can then be used to access a digital copy of their inoculation record that will be sent directly to them via the email address or phone number on file.

State officials say those who run into issues accessing the portal should double-check that their information is correct and that they’re using an email address or phone associated with their vaccine record. If problems persist, or if a record is incorrect or incomplete, residents can contact the COVID-19 Hotline at (833) 422-4255 or request help online through the virtual assistant at cdph.ca.gov/covidvaccinerecord.

Within two hours of California announcing the new portal, two residents had already contacted The Times to complain that they had run into issues accessing their records and that the troubleshooting systems seemed to be overwhelmed.

Gov. Gavin Newsom hinted at the announcement earlier this week — saying an electronic version of a paper vaccination card would soon be available, though it wouldn’t be a “passport” or a requirement.

Officials reemphasized this point in explaining the new portal, writing that residents “are not required to obtain a digital COVID-19 vaccine record” and that “the state will not be implementing a mandatory passport system in California.”

Under California’s reopening guidelines that went into effect this week, the only setting where the state might require someone to prove vaccine status as a condition of entry is an indoor event with at least 5,000 people — such as sporting events or a convention. However, in that case attendees also can submit documentation of a negative coronavirus test to enter.

Proof of vaccination or a negative test is also recommended, though not required, for outdoor events with at least 10,000 attendees.

However, individual jurisdictions, businesses or venues can implement more stringent requirements. For instance, San Francisco has ordered that if a venue accepts self-attestation as evidence of vaccination for an indoor event with more than 5,000 people, then everyone inside the venue age 2 and older must wear a mask.

A person’s vaccine status also plays a major role as far as masks are concerned.

Starting this week, Californians who are fully vaccinated for COVID-19 can go without face coverings in most situations. Those who are unvaccinated, on the other hand, are still required to mask up in public indoor settings.

According to the state, businesses or venues can either allow customers to self-attest that they’re vaccinated, require all patrons to wear a mask or implement some kind of vaccine verification system.

Additionally, the state moved Thursday to allow most fully vaccinated employees in many workplaces to stop wearing masks while on the job. Employers have to document the vaccination status of employees if they’re going to go maskless indoors, but they don’t have to retain copies of vaccine cards. and employees can also self-attest.

The new digital record would provide one way forward for those looking for some kind of verification.

California’s digital record follows in the footsteps of New York, which became the first state in the nation to offer government-issued digital proof of COVID-19 vaccination or of a negative coronavirus test result.

Known as the Excelsior Pass, it was designed by IBM with health data provided by the state’s and New York City’s vaccine databases. Madison Square Garden and Yankee Stadium have begun accepting it, though they also accept the CDC paper vaccination cards.

With the federal government unwilling to create or endorse a universal digital health pass or app, several technology and health companies are trying to fill the void, including the New York-based technology company Clear and Carbon Health, a San Francisco healthcare company with 75 primary and urgent care facilities across the country.

Clear’s digital pass gets vaccination data and negative test results from partner companies including Walmart, Sam’s Club and Atlantic Health System. The pass is being accepted by more than 60 organizations in the U.S., including MGM Resorts, the San Francisco Giants, NBA arenas and the state of Hawaii.

Carbon Health’s facilities are the source of the vaccination data and negative test results for its digital pass.