California’s unemployment is at a pandemic low, a recovery ‘milestone’

Homepage News California's unemployment is at a pandemic low, a recovery 'milestone'
News

California’s unemployment is at a pandemic low, a recovery ‘milestone’ 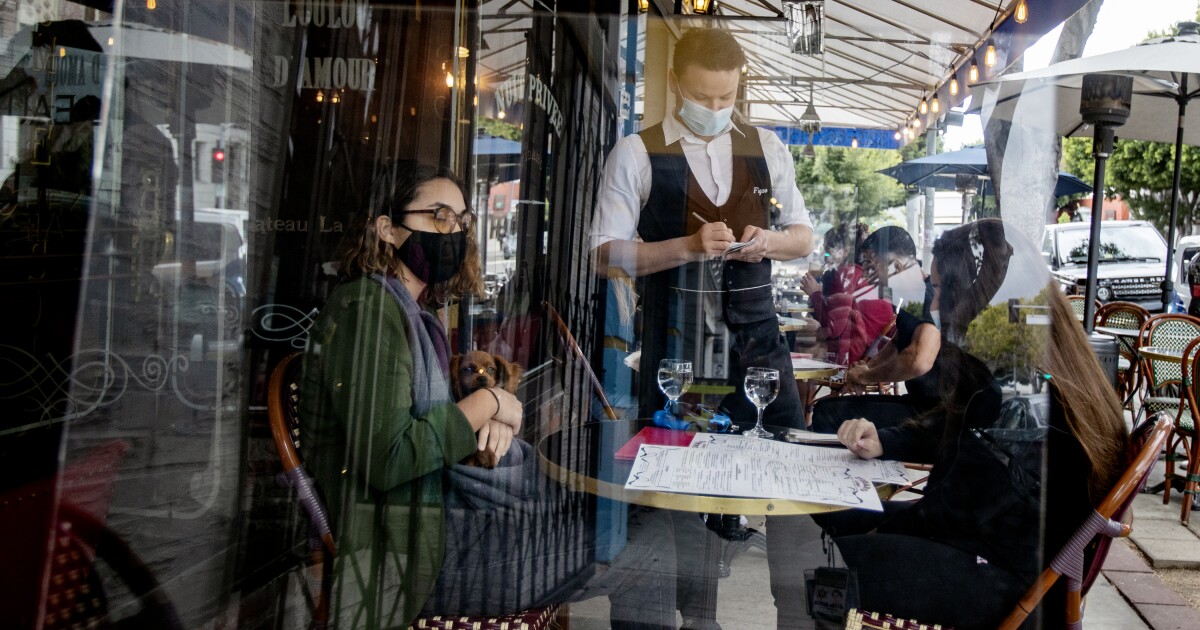 California’s economic recovery gained pace in February as the state recouped jobs lost to a dire winter COVID-19 surge, bringing the unemployment rate to its lowest level since the onset of the pandemic last year, officials said.

The state’s jobless rate fell to 8.5% from 9.0% in January as employers added 141,000 jobs, according to state data published Friday.

“Today’s news, along with the governor’s announcement this week that California is continuing to expand COVID-19 vaccine eligibility, is a milestone in our ongoing recovery,” Dee Dee Myers, director of the Governor’s Office of Business and Economic Development, and state Labor Secretary Julie A. Su said in a statement.

The February reversal recovered nearly 91% of the jobs lost in December and January, when a coronavirus surge and business closures took a grim toll on employment.

About a third of the job gains came in Los Angeles County, where small businesses were hit hard during the surge. Now they are calling back workers as the state and county relax coronavirus restrictions, analysts said. Tourism-focused San Diego County provided an additional 23% of the jobs gained.

Pent-up demand, savings some people have accumulated during the pandemic and warming weather will continue to spur consumption and employment, especially in services, said Sung Won Sohn, a Loyola Marymount University economist.

The state’s job market “still has a steep hill to climb” to get back to the pre-pandemic, high employment of a year ago, said Lynn Reaser, an economist at Point Loma Nazarene University in San Diego. February’s unemployment rate is about double the 4.3% rate of February 2020, and the state has 1.6 million unemployed workers.

Myers and Su said unemployment continues to disproportionately affect women and communities of color. “Latino and Asian American workers have been hard hit on the front lines as essential workers. African Americans have applied for unemployment benefits at astounding rates, further evidence of the inequities we must address to ensure a strong, equitable recovery,” their statement said.

California officials lifted regional coronavirus stay-at-home orders across the state in late January, and more restrictions were loosened regionally earlier this month as the state hit a goal of vaccinating 2 million residents in its most disadvantage areas. In Los Angeles County, restaurants, personal care salons and gyms have reopened indoors at limited capacity. In Orange County, Disneyland is planning to reopen with limited capacity and some restrictions April 30.

With the gradual reopening of the economy, job growth has bounced back in a sector most beleaguered during the pandemic: leisure and hospitality. Restaurants, bars, hotels, sporting events and other activities in this sector accounted for 72% of the job gains in February.

Economists said jobs will continue to return broadly, noting that in February vaccinations were still limited and schools were closed. The leisure and hospitality sector has a long way to go to recover the cumulative number of jobs lost during the pandemic downturn, with payrolls down 689,300 positions, or 33.9%, from February last year.

In reversing losses from previous months, California helped to fuel national job gains in February, accounting for more than 37% of the net jobs added in the U.S. during the month, according to an analysis by Taner Osman and Brian Vanderplas of Beacon Economics in Los Angeles. Still, the state’s labor market continues to lag behind the nation’s, with the U.S. unemployment rate at 6.2% in February.

California has the third-highest unemployment rate, tied with Connecticut after Hawaii and New York.

UCLA forecasters predicted earlier this month that the U.S. and California economies will see near-record growth this year as the pandemic winds down, due to expanding COVID-19 vaccination efforts and federal fiscal relief for struggling businesses and workers. Experts say job growth will be more vexing, however: An initial employment bump as businesses reopen is expected, but some layoffs will be permanent and many people will struggle to reenter the workforce.

Many Californians still don’t feel comfortable returning to work, which will affect the ability of employers to fill vacant positions, said David Smith, professor of economics at the Pepperdine Graziadio Business School. The state “has a lot of ground to cover,” he said.

Unemployment claims filed this month underscore the recovery challenge ahead, said Michael Bernick, a former director of the state’s Employment Development Department. Data released Thursday showed 95,863 new claims filed in California for the week that ended March 20, which is on the lower end of claims during the pandemic, but still more than double the rate in pre-pandemic months.

Small-business revenue and reopenings are down by about 30% compared with January 2020, before the pandemic set in, and have shown no signs of improvement since last fall, Bernick said: “The small-business numbers are the most concerning.”

Tags: Los Angeles News
Previous Story
Column: Let’s do away with insurance networks. They’re not lowering healthcare costs
Next Story
Column: Feds rule that Musk and Tesla are no friend to workers