Can money from Silicon Valley save low-cost housing in South L.A.?

Can money from Silicon Valley save low-cost housing in South L.A.? 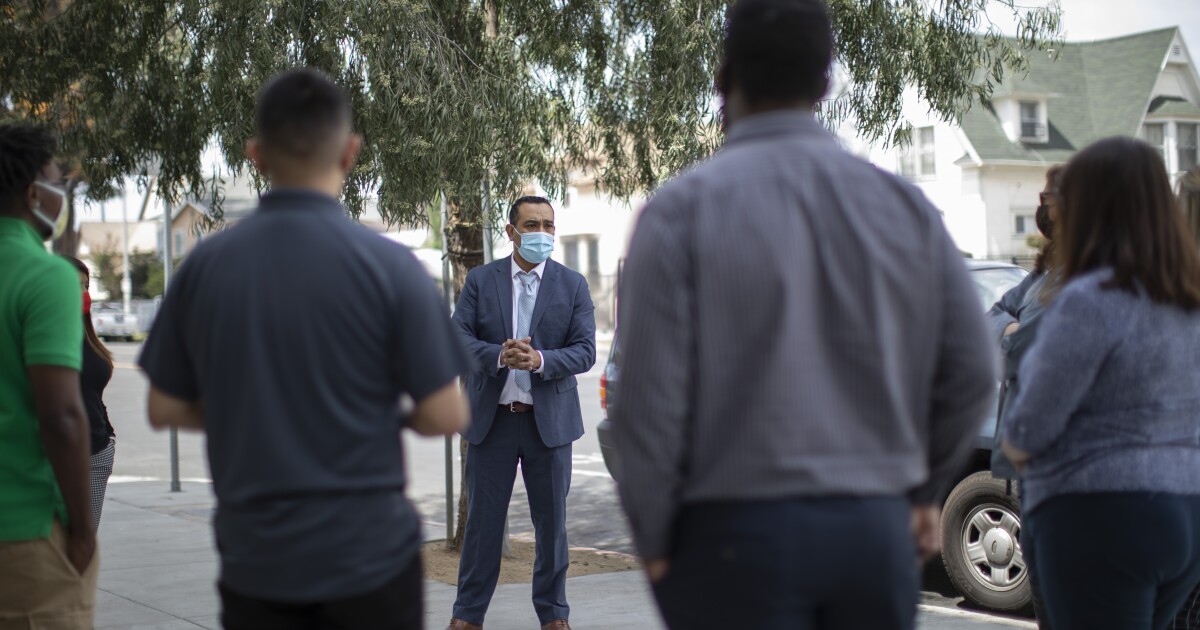 Tech wealth is coming to South Los Angeles — but not in the way some other neighborhoods in the city have become accustomed to.

A new program backed by the personal philanthropic company of Facebook founder Mark Zuckerberg and his wife, Priscilla Chan, aims to help small landlords there so that properties stay in the hands of locals, stay affordable to locals and help build wealth within the community.

The Los Angeles Local Rental Owners Collaborative is a joint effort of nonprofits, an online property management firm and the Chan Zuckerberg Initiative. It will put $5 million in the hands of landlords — particularly those slammed by the COVID-19 pandemic — to pay for rent owed by struggling tenants, and for any needed building repairs.

“It’s a critical part of having a healthy neighborhood — having locally owned assets,” said Alejandro Martinez, chief real estate officer for the Coalition for Responsible Community Development, which is administering the program.

The program, which launched Thursday, will also provide financial coaching for small landlords, including helping them pool resources to gain discounts on insurance, mortgages and legal services.

It’s the latest deployment of tech money to alleviate a housing crisis that tech companies have been blamed for worsening through their rapid expansion over the last decade, as their offices expanded and highly paid employees moved to new neighborhoods.

Much of that money, including a $1-billion pledge by Google in 2019, has gone toward building new housing.

The Chan Zuckerberg Initiative — which has invested in efforts such as housing, education and criminal justice reform — has in previous programs given money to enable nonprofits to acquire existing housing in California.

In this new initiative, funds will flow directly to private owners to enable them to keep their properties.

The idea is to directly help small landlords, particularly people of color, in order to stanch a potential tide of gentrification and lost wealth if the pandemic-induced economic downturn leads to a wave of foreclosures and forced sales similar to what happened in the 2008 housing bust.

“Our communities are at their best, and are their most vibrant, when everyone has a safe, affordable place to call home,” Chan said in a statement. The new program will help “stabilize and improve housing for those who need it most — particularly within Black and Brown communities that have been hit hardest by the pandemic and by decades of exclusionary housing policies.”

The program, which is also receiving funding from the Roy + Patricia Disney Family Foundation, is starting a pilot in a specific area of South Los Angeles, but backers hope it can expand in the future.

For now, owners must have a tenant who is behind on rent and must own two to 20 units, including one that must be in the corner of South Los Angeles that encompasses the Historic South Central, South Park and Central-Alameda neighborhoods. The boundaries are Washington Boulevard to the north, Slauson Avenue to the south, the 110 Freeway to the west and Alameda Street to the east.

Ruby Bolaria Shifrin, director of housing affordability with the Chan Zuckerberg Initiative, said the pilot program was crafted this way — targeting the smallest landlords and that specific geography — to help people most in need.

Bolaria Shifrin said the neighborhoods are home to many workers in industries slammed by layoffs during the pandemic. Housing there is low cost relative to many L.A. neighborhoods, and is often owned by landlords who are BIPOC — Black, Indigenous and people of color.

She said the program is prioritizing help for landlords who are BIPOC, in part to prevent an expansion of the yawning racial wealth gap, itself a reflection of historical discriminatory policies such as redlining.

A recent survey from Avail, an online property management service, and the Urban Institute that focused specifically on Black and Latino landlords found they were financially more vulnerable than white owners before the crisis and are now facing more problems paying their mortgages, leaving them at heightened risk of foreclosure and their tenants at risk of displacement.

Helping lift mom-and-pop landlords — those who own a small number of units — can have knock-on effects way beyond the individual owners, the program’s leaders said.

For one, these small landlords tend not to raise the rent in the way big investors and companies do, keeping housing more affordable. They’re also in their community for the long run: using the income from their property for retirement, and passing an asset on through generations.

About 80% of all L.A. County homes affordable to someone making 80% of the median income are that way because the landlord has chosen to set rents there, meaning there isn’t a government mandate or special aid to keep them affordable, according to a report from McKinsey & Co. Seventy-six percent of these properties — often called naturally occurring affordable housing — are owned by individuals rather than companies.

“Most affordable housing stock is not under tax credits or something else,” said Jacqueline Waggoner, an executive with affordable housing nonprofit Enterprise Community Partners, which is also helping run the new program. “It’s critical that we don’t lose what we have.”

In the years before the pandemic, many tight real estate markets across the country — including South L.A. — were losing relatively low-cost, nonsubsidized rental units as large investors scooped up the properties to redevelop them into more expensive housing.

The flood of capital coming into the larger South L.A. region has concerned many longtime Black and Latino residents, who worry they are being priced out of certain neighborhoods as wealthier, often white individuals move in.

That latest investment push came on top of a previous wave of capital that arrived in South L.A. in the wake of the 2008 financial crisis, when Wall Street-backed firms scooped up many single-family homes that went into foreclosure, something they did in hard-hit markets across the country.

The South L.A. program offers landlords 80% of what they are owed by tenants if they agree to forgive 20% of the arrears, similar to the terms of relief programs being administered by the city of Los Angeles and the state.

Money will go directly to the landlord, and the tenant will be protected from eviction for the amount of arrearages paid and forgiven.

Landlords will also receive a year of free access to Avail. And the Coalition for Responsible Community Development will host monthly meetings with landlords to talk about new laws and how to access government programs.

In addition to BIPOC owners, the program will prioritize applications from landlords with two to five units and those at high risk for foreclosure. It will also give priority to people who haven’t received financial help from other sources, such as the more than $2 billion in rent relief now being distributed statewide. Landlords can start applications here.