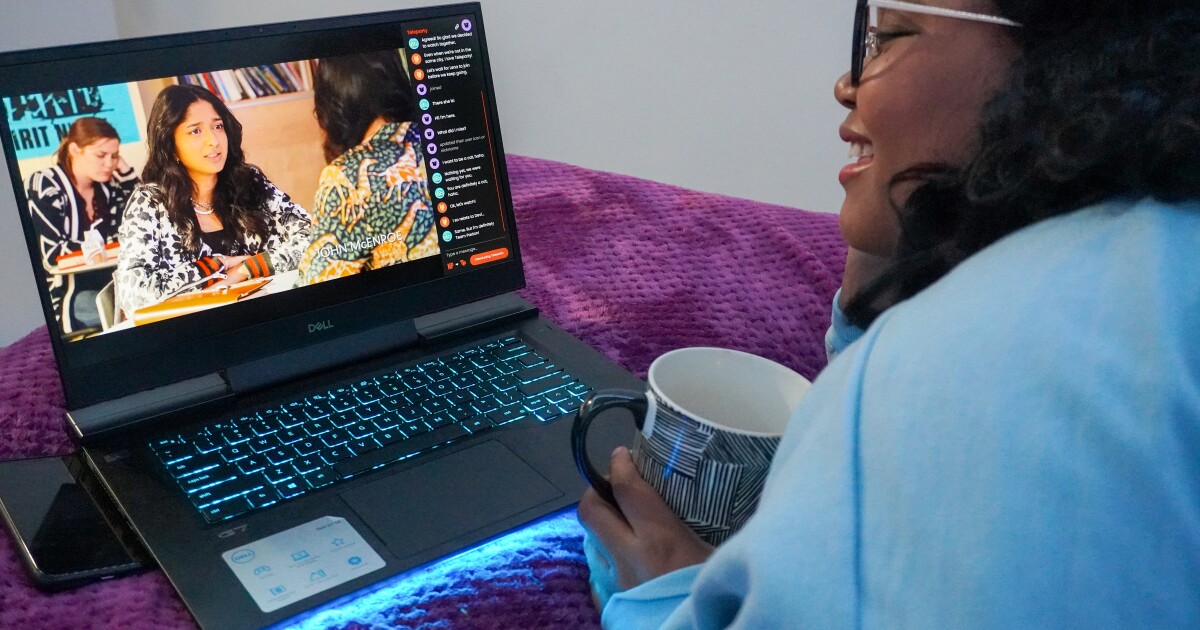 For its first few years, Teleparty seemed doomed to be a niche product. The browser extension, which lets multiple people sync up their Netflix accounts so they can watch the same thing at the same time, was a hit among couples in long-distance relationships. Otherwise, few people had even heard of it.

And then, in March 2020, the app suddenly found itself with a planet’s worth of potential users.

Lockdowns weren’t so great for movie theaters or the economy as a whole. But for Teleparty, they were “a huge accelerant,” Chief Executive Shaurya Jain said. “We definitely grew a lot.”

And they weren’t alone.

Call it remote entertainment, a counterpart to the more-familiar remote work. At the end of a long day of video calls and Slack messages, workers unable or unwilling to meet up at the bar can mouse over to another tab for some virtual socialization on apps such as Discord and Clubhouse. Think of it as Zoom: After Hours.

The pandemic gave this burgeoning phenomenon a boost, pushing into the mainstream what had previously been the domain of gamers, overseas soldiers and other sub-communities. These days, everyone’s living life online and at a distance.

Although the future of remote work is largely in the hands of employers, the future of remote entertainment will come down to what happens once consumers are free to resume the same face-to-face activities they were enjoying two years ago — whenever that happens. (With hospitalizations rising and cities reimplementing mask mandates in response to the Delta variant of the coronavirus, it may not be for a while.)

When Abraham Shafi named his event discovery app IRL — short for “in real life” — he certainly wasn’t anticipating a future where meet-ups would be taking place primarily in cyberspace.

After a pause on featuring non-virtual events during the height of the pandemic, IRL is working on reintroducing them but also planning for a hybridized future in which there’s less of a line between online and offline entertainment.

“We’ve all learned how to engage online more than ever,” Shafi said, comparing remote entertainment to a muscle that consumers and creators have both strengthened during quarantine.

People have been primed, he said, for a future in which live concerts get live-streamed and digital movie premieres are cultural moments in their own right. (That future is already here for some people; last month, the listening party for Kanye West’s latest album happened simultaneously in both Atlanta’s Mercedes-Benz Stadium and an Apple Music livestream.)

“Realizing that there’s a whole revenue channel online is massive,” Shafi said, and many entertainment companies wouldn’t have done so for a while (if ever) had the pandemic not forced them to. “You need a drastic global event or personal event to change our habits, for the most part, especially at a scale of a business or consumer habits.”

For many tech companies in the entertainment space, that seems to be exactly what’s happened. Discord — a forum-based platform which offers a mix of text, voice and video chat — was around for a few years before the pandemic hit. But a company spokesperson told The Times via email that COVID-19 accelerated its growth as homebound users “sought ways to stay in touch and spend quality time with their communities,” including not just the video-gaming servers the platform is known for but also book clubs, study groups and sports fan networks.

The result: In 2020, revenue tripled and user growth doubled, the spokesperson said. In March, Microsoft reportedly held discussions about acquiring Discord for more than $10 billion.

“We are incredibly confident in the strength of our business and our growth trajectory, and are already seeing that people are continuing to turn to Discord to find community and belonging, even as the world reopens,” the spokesperson said.

For the audio-only conversation app Clubhouse, maintaining an upward trajectory as users’ options open up has been a challenge. The platform launched amid widespread stay-at-home orders and proved a sensation despite, or perhaps because of, an invitation-only policy. With the app now open to all as of July and better-established platforms eagerly cloning it, many observers have been underwhelmed by Clubhouse’s recent growth, although international metrics remain strong.

(For startups, whose investors need massive hits to balance out their many misses, slow growth can be as bad as none at all.)

Although its initial popularity seemingly owed much to a captive audience of lonely, bored and sheltered-in-place users, the company’s head of global marketing, Maya Watson, emphasized to The Times that Clubhouse “wasn’t launched to be a pandemic solution.” But, she said, “sometimes there’s the right product at the right time.”

When the pandemic does end, she said, the company will be able to explore new use cases — commutes, for instance — and experiment with hybrid online/offline models.

“For the BET Awards … we sent a creator to the red carpet who was there doing interviews, but then she was live in a Clubhouse room at the same time,” Watson said.

Jain, its CEO, says he initially got the idea for the app from college students who would “Netflix and chill” while on campus but then wound up in long-distance relationships after going home for the holidays or moving to other cities for internships. “I realized that there was an opportunity to build a better experience for them,” he said.

Another programmer, Stephan Boyer, had already developed a similar tool, which Jain says he acquired. From there the company slowly grew as more college students and a smattering of users from other groups, such as military personnel, joined.

“We definitely saw the ebbs and flows of seasonality when we had college students as our primary user base,” Jain said. “Every summer we’d see a big spike, and every fall we’d see a small dip. But it ended up trending upwards.”

Within a few days of the World Health Organization declaring a pandemic in March 2020, the founder of the consumer advice website Product Hunt had tweeted that he was “seeing a surge of traffic to Netflix Party” — the app’s name before it began also supporting Hulu, Disney+ and HBO. Domestic Google searches for the platform grew 100-fold between March 1 and March 21, 2020. Article after article pitched it as a way for readers to maintain their social lives during the early weeks of shelter-in-place.

Teleparty declined to share specific numbers on its growth since the onset of social distancing, but Google’s Chrome store puts the browser extension at more than 10 million users.

And after a year and a half of people living life online, Jain expects Teleparty will prove sticky enough to retain many of them: “Some people will go back, but some people also enjoy the benefits.… It’s hard to detract away from the convenience that remote work and remote entertainment provide.”

Julia Alexander, a senior strategy analyst at Parrot Analytics whose work has focused on the streaming industry, agreed.

“People who might not have been as tech-savvy in 2019 or 2018 — I think of my parents, for example — people who were not necessarily looking to have a communal experience with someone over the internet while they were watching a movie or watching a TV show; suddenly, that’s become much more accessible, much more available and oftentimes free,” Alexander said.

“Even in a post-pandemic world — whenever that happens — what they’ve created is permanent,” she said. From now on, when people are homesick or even just lonely, apps like Teleparty and Discord will be among the default activities they turn to. “Those are permanent mainstays, and I think we will see usage temper off a little bit, but kind of always be there.”

Ben Klase is a case in point. A 25-year-old from the Colorado foothills, Klase had never used Teleparty before the lockdown. Once he downloaded it, the app became a frequent social outlet for Klase, who is high risk, to connect with friends from the safety of his home.

“I actually met my girlfriend through Reddit during the pandemic, and she lives in Minnesota, so it’s a nice thing for us to do together,” Klase said. “And then my brother lives in New York, so sometimes we’ll watch something if we’re not playing video games. I mean, I’ll definitely keep using it.”

Tags: Los Angeles News
Previous Story
L.A. is weighing vaccination requirements. Here are 20 restaurants and bars already implementing them
Next Story
The custom auto shop behind Hollywood’s most iconic cars may be closing