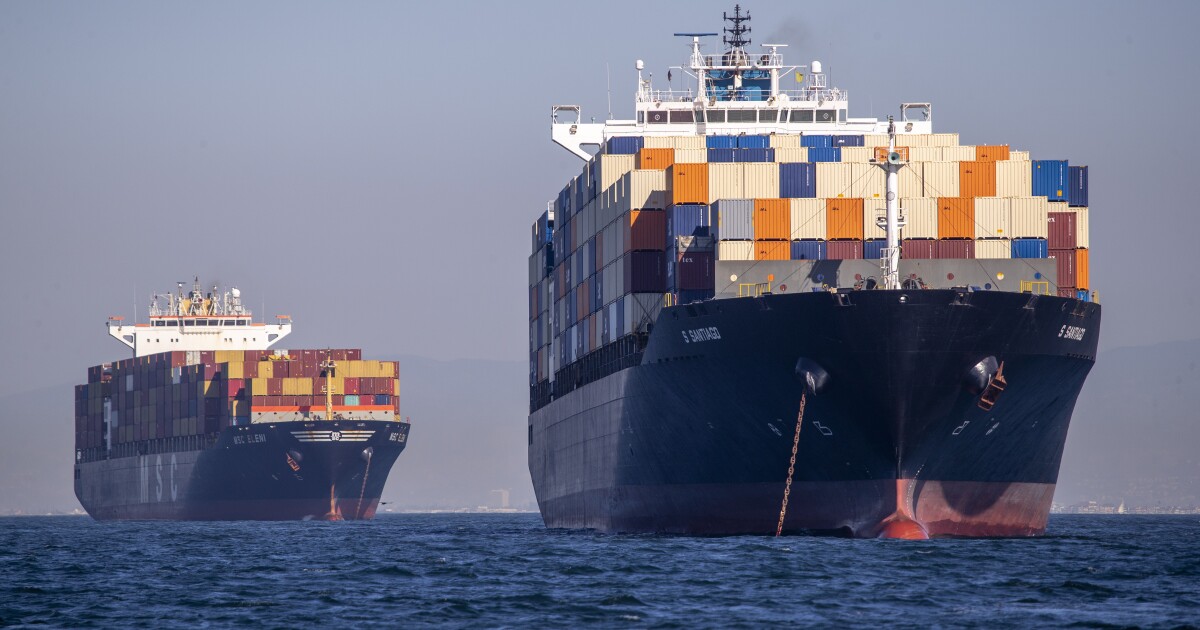 In mid-October, when the White House announced it was wading into the logistics logjam at the ports of Long Beach and Los Angeles in a bid to unclog the supply chain before Christmas, 58 container ships were waiting offshore.

Nearly a month later, San Pedro Bay’s unwilling flotilla has grown to 78 vessels, and more are on the way to meet holiday shopping demand. But on the docks themselves, the situation seems to be improving — slightly.

One key problem facing the port complex has been the towering piles of containers left at the import terminals for days on end, taking up space that should go to new containers unloaded from the ships offshore.

In response, officials at the ports voted in late October to impose a new fee on containers that sit around for more than six days if intended for rail transport or nine days if intended for trucks. Starting Nov. 15, the ocean carrier companies that brought those idling containers in will be charged $100 on the first day past deadline, $200 on the next, and so on — an escalating fine that could quickly grow into the tens of millions of dollars a day for the thousands of containers on the docks.

The fee was intended as a shot across the bow of the shipping companies. Gene Seroka, executive director of the Port of L.A., said he hoped the program would be “resoundingly unsuccessful” at bringing in revenue because “the less money we collect the more cargo is moving.”

“This fee is already meeting its objective,” Noel Hacegaba, deputy executive director of the Port of Long Beach, said in a statement.

The ocean carriers have also responded with plans to send sweeper ships to remove the empty containers — approximately 30% of the total boxes piled up — that are clogging up the docks, Hacegaba said.

Clearing out those empties would help address one of the major bottlenecks that truck drivers say are making it impossible to clear out cargo. For months now, some shipping companies have refused to accept empty containers back for lack of space, leaving truck drivers stranded with a useless box on their trailer chassis and unable to pick up a fresh container.

Matt Schrap, chief executive of the Harbor Trucking Assn., said that he’s seen small improvements — and a real uptick in velocity for new boxes arriving at the terminals.

“What’s moving a lot faster is the cargo that’s showing up here now, it’s just flaming out of here,” Schrap said. “The stuff that’s been dwelling is moving a little slower, but it is moving.”

He credits the fee with galvanizing the giant multinational ocean shipping companies as well as their customers, who fear that the carriers will pass it along to them. “This has been described by the ocean carriers as a ‘forced evacuation’” of containers, Schrap said. “Which gives me the impression that if they weren’t forced to do this they would leave them on the docks.”

The executive directors of both ports have the power to postpone the deadline for the new fee past Nov. 15, but Schrap said there’s no sign that they’re planning to back off. “They’re really trying to use this as a threat to move this stuff,” he said.

With space opening up at the terminals, truckers say that dropping off empties is becoming a little smoother. Lisa Wan, director of operations at the trucking firm RoadEx America, said that her job has gotten easier in the last 10 days.

Her company also got a long-delayed top-loader delivered to its truck yard, which allows it to remove and store its own empty containers, freeing up more chassis for pickup.

“From a couple weeks ago, I do see little small improvements,” Wan said.

Though there’s plenty of room for more.

On Monday night, long lines at the port gates meant one of her truck drivers missed his appointment to pick up a new container, even with an empty chassis waiting to be filled.