Column: A California judge pinpointed the biggest problem with Prop. 22 — its greediness

Column: A California judge pinpointed the biggest problem with Prop. 22 — its greediness 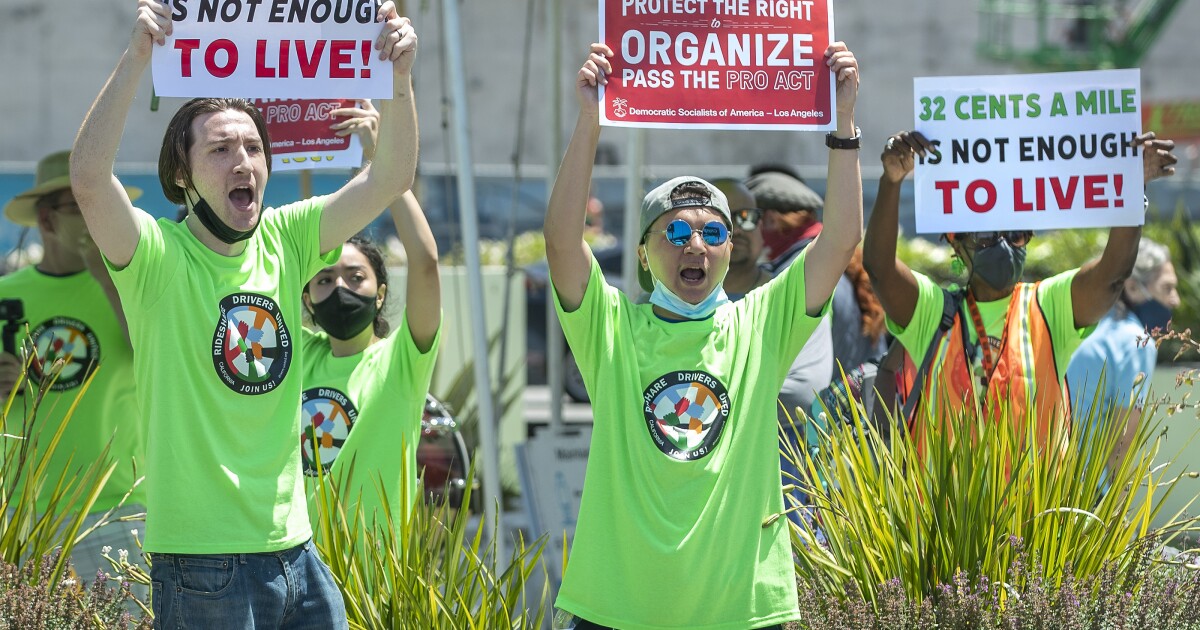 The passage last November of Proposition 22, which was written and paid for by Uber, Lyft and other gig companies, was bad news for California workers.

The measure exempted those companies from AB 5, the state law that required them to treat their drivers and other field workers as employees rather than independent contractors.

That deprived the workers of benefits such as overtime pay, unemployment and workers’ compensation coverage, and the right to unionize. The companies, in other words, used their wealth to reshape labor law in their sole interest.

[Proposition 22] appears only to protect the economic interests of the network companies in having a divided, ununionized workforce.

A state judge, however, just called a foul on the gig companies. In a decision handed down Aug. 20, Alameda County Superior Court Judge Frank Roesch declared Proposition 22 unconstitutional and “unenforceable in its entirety.”

In his decision, Roesch homed in on the most obnoxious aspect of the measure: its vast overreach.

As Roesch observed, the state Constitution requires ballot initiatives to be limited to a single “subject.”

The measure’s own text identifies its subject, in Roesch’s words, to be “protecting the opportunity for Californians to drive their cars on an independent contractor basis, to provide the drivers with certain minimum welfare standards, and to set minimum consumer protection and safety standards.”

The initiative, however, includes language that “obliquely and indirectly” prevents drivers and delivery workers from unionizing. That’s “not a stated goal of the legislation,” Roesch found. Instead, “it appears only to protect the economic interests of the network companies in having a divided, ununionized workforce.”

“That’s one of the most important sentences in the decision,” says Veena Dubal, a professor at UC Hastings College of the Law and a longtime critic of the gig companies. “It underscores the degree to which this proposition was really just trying to undermine the rights of drivers, undermine the ability of municipalities and the state to legislate in this arena to help workers ever again.

“The proposition was greedy, it tried to cement the companies’ business model and to take away all rights of workers in this sector,” Dubal told me. “We’ve never seen an initiative try to do what this initiative tried to do.”

The future course of the litigation, which was filed by the Service Employees International Union and four gig drivers, isn’t clear. Spokespersons for Uber and for the Proposition 22 campaign said the companies are sure to appeal.

“This ruling ignores the will of the overwhelming majority of California voters and defies both logic and the law,” Uber spokesperson Noah Edwardsen said. “We will appeal and we expect to win.”

The appeals process could take months, even if the ruling is taken up directly by the California Supreme Court instead of first being heard by a state court of appeal. No one can be sure whether Roesch’s decision will hold up, Dubal says, because this is “a case of first impression for the courts.” That means they’re sailing in uncharted waters.

Also unclear is whether Proposition 22 will remain in effect during appeals. But whether Judge Roesch will stay his decision for the interim won’t be known for days, at least. That could be important, because shortly before Proposition 22 stayed their hand, state officials were prepared to enforce AB 5 by mandating that the companies designate their workers as drivers.

In August 2020, a state judge gave the companies 10 days to comply with AB 5. Uber and Lyft threatened to shut down their operations in California if the ruling went into effect. The ruling was invalidated by the initiative, however.

The Proposition 22 campaign and its victory at the ballot box were a reproach to the idea that voters’ wisdom is an unerring counterweight to corporate interests’ influence in politics.

As I reported earlier, the initiative process was installed in California law in 1911 as a weapon to be used against the Southern Pacific Railroad, which was known as “the Octopus” because of its domination of California business and politics. (The referendum and recall were part of the same reform package.)

From the inception, however, critics warned that the reforms might merely supplant one set of special interests by a different set.

Proposition 22 was an object lesson in how that could happen. The campaign showed that voters’ judgment could be manipulated by torrents of money, deployed to inundate the electorate with misrepresentations and outright lies.

Uber and its fellow ride-hailing company Lyft, along with the delivery companies DoorDash and Instacart, spent about $205 million to pass Proposition 22, which the industry drafted.

That was the most ever spent on a ballot measure in American history. They swamped the opposition, which raised and spent less than $19 million. The measure passed by nearly a 60-40 vote.

The gig companies implied that the failure of Proposition 22 at the ballot box would mean higher fares for passengers and lower income for drivers and delivery workers. What they didn’t say was that those outcomes were probably inevitable anyway.

That’s not because state laws pushed expenses higher but because the companies’ reliance on indulgent financing by venture capital investors would come to an end sooner or later.

“Those of us who follow this industry have said these companies operate at a loss, so it’s inevitable that they would raise consumer prices once consumers are dependent on the service,” Dubal says.

The predictions have come true. By late May, some of the latitude that Uber had given drivers to set their own fares and to get more information about the trips they were offered before deciding whether to accept them had been taken away.

“A lot of drivers were very gung-ho about Proposition 22,” Tonje Ettesvoll, who had driven for Uber in San Diego for five years, told me in May. “Now they feel completely deceived.”

After the initiative’s passage the companies also jacked up their fares and fees.

Uber instituted a “California Drivers Benefit Fee,” surcharging passengers purportedly to cover the benefits of Proposition 22, which included limited access to health insurance and a guarantee of a minimum wage for the hours drivers spend on their way to pick up customers and with passengers in the car. Instacart raised its service fee in California to 8% from 5%, according to Bloomberg.

Uber fares have jumped by 53% this year, according to Rakuten Intelligence. Meanwhile, wait times for rides have increased, a trend Uber and Lyft ascribe to the difficulty of finding drivers.

“We have not seen drivers supply keep up with the demand growth in the U.S.,” Uber Chief Executive Dara Khosrowshahi said during an investment conference in May.

Uber and Lyft have both struggled to stay afloat, despite a business model that entails sticking their drivers with expenses such as fuel, insurance and vehicle maintenance. Lyft lost more than $679 million on revenue of $1.37 billion in the six months that ended June 30.

Uber recorded a profit of nearly $990 million on revenue of $6.8 billion in the same period. That was largely due, however, to gains Uber recorded on stock it held in the Chinese ride-hailing company Didi as a result of selling its China business to Didi in 2016, and shares in Aurora Innovation that it received when it sold Aurora its driverless car business earlier this year.

On its core ride-hailing and food delivery businesses, Uber lost $2.7 billion in the first six months of this year.

The corporate drafters of Proposition 22 dressed it up as a boon for driver and passenger rights, but Roesch didn’t bite.

He saw Proposition 22 for what it is: a tool for the gig companies to preserve the business model that allowed them to muddle through as long as they have by outsourcing their expenses to their drivers and delivery people, while pocketing as much of their income as they can.

Tags: Los Angeles News
Previous Story
Column: Want to read a tech company’s user agreements? Got 90 minutes to spare?
Next Story
After OnlyFans, will sex workers find a new home on the internet?