Column: A Nobel laureate backs off from claiming a ‘smoking gun’ for the COVID-19 lab-leak theory

Homepage News Column: A Nobel laureate backs off from claiming a 'smoking gun' for the COVID-19 lab-leak theory
News

Column: A Nobel laureate backs off from claiming a ‘smoking gun’ for the COVID-19 lab-leak theory 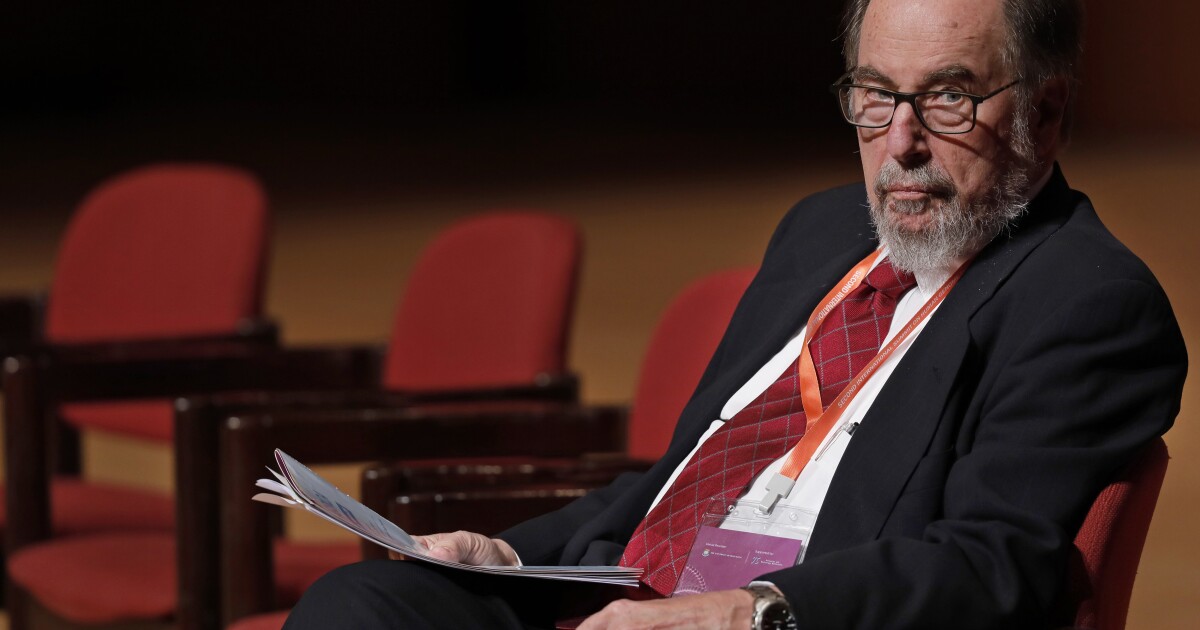 For those concerned with the origins of the virus causing the COVID-19 pandemic, a few words from Nobel laureate David Baltimore seemed to settle the debate, decisively in favor of the theory that the virus was man-made before it escaped from a Chinese laboratory.

A feature of the virus’ genome known as the furin cleavage site “was the smoking gun for the origin of the virus,” Baltimore said.

Using virologists’ shorthand for the virus, SARS2, he continued: “These features make a powerful challenge to the idea of a natural origin for SARS2.”

I believe that the question of whether the sequence was put in naturally or by molecular manipulation is very hard to determine but I wouldn’t rule out either origin.

Proponents of the lab-leak hypothesis — that is, that the virus escaped from a lab rather than reaching humans as a natural spillover from a wild animal host — could scarcely have hoped for a more substantial endorsement of their views.

Baltimore is one of the nation’s most eminent scientists, a former president of Rockefeller University and Caltech, where he still serves as president emeritus and remains on the faculty as distinguished professor of biology.

His expertise is virology, which places the inquiry into the structure of SARS2 squarely in his professional wheelhouse. He shared the 1975 Nobel Prize in physiology or medicine for discoveries related to “the interaction between tumor viruses and the genetic material of the cell,” as the Nobel citation stated.

Baltimore’s “smoking gun” quote appeared in a May 5 article in the Bulletin of the Atomic Scientists — not a peer-reviewed scientific journal, but a respected publication that has run numerous articles on the COVID-19 pandemic. (Founded by former scientists of the Manhattan Project to carry their warnings of the dangers of nuclear proliferation, it’s probably best known for its cautionary Doomsday Clock.)

The article itself, by science writer Nicholas Wade, has become one of the most often-cited pieces in support of the lab-leak hypothesis. The quote from Baltimore is part of its argumentative bedrock. The bulletin’s editor, John Mecklin, even invoked the quote to me in a Twitter exchange in which he criticized my earlier column questioning the hypothesis.

“I think David Baltimore should be listened to,” Mecklin tweeted.

Here’s the problem: Baltimore regrets using the phrase “smoking gun” to describe his conclusion, and doesn’t agree that it validates the lab-leak theory.

Baltimore told me by email that he made the statement to Wade, also by email, and granted him permission to use it in print. But he added that he “should have softened the phrase ‘smoking gun’ because I don’t believe that it proves the origin of the furin cleavage site but it does sound that way. I believe that the question of whether the sequence was put in naturally or by molecular manipulation is very hard to determine but I wouldn’t rule out either origin.”

Baltimore has made similar statements to others who have asked him about the quote, including Vincent Racaniello of Columbia University, a former lab colleague of Baltimore’s, and Amy Maxmen of Nature. Baltimore told Maxmen that while evolution could have produced the virus, “there are other possibilities and they need careful consideration, which is all I meant to be saying.”

Per Racaniello, Baltimore “said he should not have used the phrase ‘smoking gun.’ What he meant to say was that it was a striking suggestion of a possible origin of the virus.”

Wade told me by email that he still believes that Baltimore intended the “smoking gun” phrase “to be understood in the light of his next sentence, that ‘These features make a powerful challenge to the idea of a natural origin for SARS2.’” Wade said the phrase should be understood in the context of “the totality of the quote.”

All this might seem inside baseball to casual followers of the COVID origin debate, but it’s more important than that. As I reported in my earlier column, the question of the origin of the virus boils down to two categorical possibilities.

One is that the virus reached the human population through a release — accidental or deliberate — from a virus laboratory in Wuhan, China, which either had a variant in its inventory or had created the virus through genetic manipulation. Whether the researchers were trying to create a super-spreading bioweapon or merely doing research into its features is a sub-category of this theory.

The other is that the virus reached humanity by spilling over from animals.

The two theories point to sharply different policy responses. A lab leak tells us that the biological security of institutions doing research into live pathogens needs to be dramatically shored up. Natural spillover warns us that contacts between human communities and wildlife harboring potentially infectious pathogens, such as bats, should be better monitored and regulated.

Experienced virologists heavily favor the natural-spillover theory. That’s because the phenomenon has been common throughout history, accounting for the spread of most viruses and indeed for most pandemics. The direct animal source hasn’t been identified; it’s not unusual for investigations of that nature to take years. SARS2 has been known to scientists for only about 18 months.

No one denies that a lab leak is possible. But the theory presupposes a complex series of events coming together perfectly in a Chinese lab — secrecy and coordination, perhaps abetted by extreme sloppiness, or even deliberate malevolence.

Balancing the commonplace nature of animal-human spillover against the complex assumptions required by the lab-leak theory, virologists say, tips the scales in favor of the former.

“We cannot prove that SARS-CoV-2 has a natural origin and we cannot prove that its emergence was not the result of a lab leak,” Kristian Andersen of the Scripps Research Institute in La Jolla, lead author of a seminal paper on the origin of the virus, told me by email.

“However, while both scenarios are possible, they are not equally likely,” Andersen wrote. “Precedence, data and other evidence strongly favor natural emergence as a highly likely scientific theory for the emergence of SARS-CoV-2, while the lab leak remains a speculative incomplete hypothesis with no credible evidence.”

The weakness of the lab leak theory is underscored by the character of the evidence invoked to support it — exaggeration of supposed research findings, the magnification of coincidences into certainties, the interpretation of heightened interest in the theory as proof of its validity, supposition piled upon conjecture.

That brings us back to Baltimore’s specific assertion regarding the furin cleavage site. This concerns the protein “spikes” on the surface of the virus. The spike penetrates healthy cells, allowing the virus to inject its infectious content and start replicating.

To work, the spike must be cut in two, which is done by the protein furin. Wade asserted that the presence of the furin cleavage site on the SARS2 virus was so unusual that it could not have occurred in nature. “Anyone who wanted to insert a furin cleavage site into the virus’s genome,” he wrote, would “synthesize” the necessary genomic sequence “in the lab.”

He then quoted Baltimore citing the furin cleavage site as the “smoking gun” constituting a “powerful challenge to the idea of a natural origin for SARS2.”

Other virologists challenge the assumption by Wade and the assertion by Baltimore that there’s anything unique or especially unusual about the furin cleavage site on SARS2. Such sites have been found in similar viruses, and natural mechanisms for their appearance have been identified.

In other words, the furin cleavage site on SARS2 does nothing to validate the lab-leak theory. Baltimore plainly recognizes this, which is why he regrets calling it a “smoking gun.” If he really believed it was, then he wouldn’t say that he hasn’t ruled out either theory for the virus’ origin, as he told me by email.

The last question raised by Wade’s article and Baltimore’s quote is whether the Bulletin of the Atomic Scientists owes its readers some context. I asked Mecklin whether that was so, but he hasn’t replied.

Yet Baltimore has effectively disavowed his characterization of the furin cleavage site. As with so many other claims made to support the lab-leak theory, this “smoking gun” turns out to be mostly smoke.