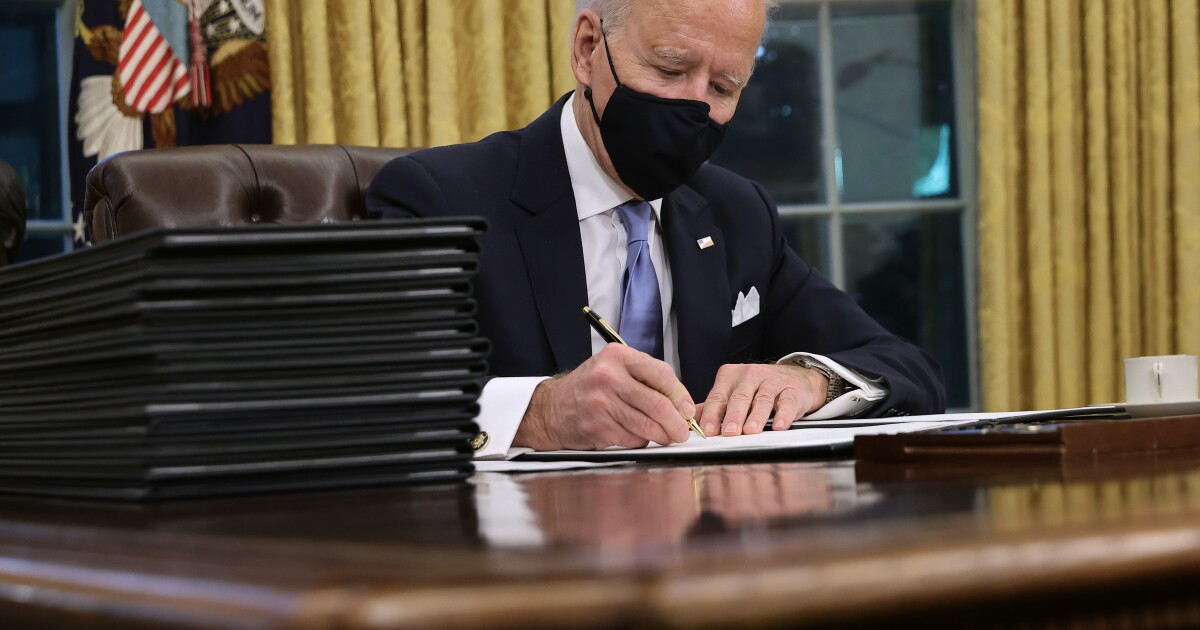 Continuing his considerable effort to strip the government of all vestiges of Trumpism, President Biden on Tuesday swept a clutch of union-busting officials out of a little-known but all-important federal labor relations agency.

The agency is the Federal Service Impasses Panel, which rules on disputes over government union contracts when an agency and its union can’t reach agreement.

The diversity of this panel ranges from people who publicly campaign against unions to people that actively litigate against unions.

As originally reported by Erich Wagner of Government Executive, Biden demanded the resignation of all 10. Eight resigned. The other two refused and were summarily fired on Tuesday.

Biden’s action should write finis to an especially noxious period in government labor relations. The Impasse Panel and its parent agency, the Federal Labor Relations Agency, have been engaged in wholesale union-busting virtually since the outset of Trump’s tenure, even though by law they’re supposed to protect employees’ rights to unionization and collective bargaining.

As he did with other federal agencies such as the departments of State, Labor, and Interior and the Environmental Protection Agency, Trump installed leadership openly devoted to undermining the impasse panel and the labor relations agency.

Under its 2-1 GOP majority, the FLRA even flatly refused to negotiate with its own union. (As Slate’s Mark Joseph Stern reports, Biden has elevated the agency’s lone Democrat to its chairmanship; a change to a 2-1 Democratic majority is imminent.)

“The Trump administration pulled out all of the stops on this one,” Randy Erwin, president of the National Federation of Federal Employees, said in 2017 as the impasse panel was taking shape. “The diversity of this panel ranges from people who publicly campaign against unions to people that actively litigate against unions.”

With the advent of the Biden administration, several federal unions wisely dropped lawsuits challenging the impasse panel’s rulings. Their argument was that the panel members were not subject to Senate confirmation, and therefore their appointments were unconstitutional. Victory in court, however, would only have tied Biden’s hands in remaking the panel.

That Trump’s impasse panel would have an anti-union slant was obvious from the members’ biographies.

The former chairman, Mark Anthony Carter, is a lawyer specializing in “advising employers on all aspects of relationships with labor unions.”

Former member Karen M. Czarnecki is associated with the Koch-funded Mercatus Center at George Mason University, a libertarian think tank that has been a promoter of deregulatory policies; she also worked at the Heritage Foundation and the Koch-funded American Legislative Exchange Council, which was the source of anti-union measures implemented by Wisconsin Gov. Scott Walker.

Other former members boasted associations with such right-wing groups as the Freedom Foundation, which launched attacks on public sector unions in Washington state. Two are associated with the right-wing Mackinac Center Legal Foundation, which has been funded by the Koch network and the DeVos family, which earned its fortune from Amway and gave us Trump’s wretched education secretary, Betsy DeVos.

One of those members, F. Vincent Vernuccio, even wrote a blog post as a Mackinac fellow decrying a provision of the pandemic relief CARES Act as “simply a handout to unions.” The provision required employers receiving a CARES bailout to remain neutral in union-organizing activities.

Another Koch-funded outfit, the Illinois Policy Institute, appears on the resumes of two members.

The harvest was a string of anti-union rulings. The impasse panel gutted provisions of contracts with the Social Security Administration, including protections for union activity and telework — the latter a work-from-home program that improved productivity at the agency and became crucial with the onset of the pandemic.

The panel essentially endorsed the anti-union campaign of Social Security Commissioner Andrew Saul, a Trump appointee whose days are almost certainly numbered at the agency.

The impasse panel sometimes even went further than federal employers had asked in settling their disputes, doing so even after finding that an agency had failed to make its case. In a dispute between the Social Security Administration and the union representing its administration law judges, the panel found that the agency offered “little justification” for its position, but adopted that position as “the most appropriate under the circumstances of this dispute” anyway.

So, good work by Biden to clear out this corner of Trump detritus. Unfortunately, the job is just beginning.