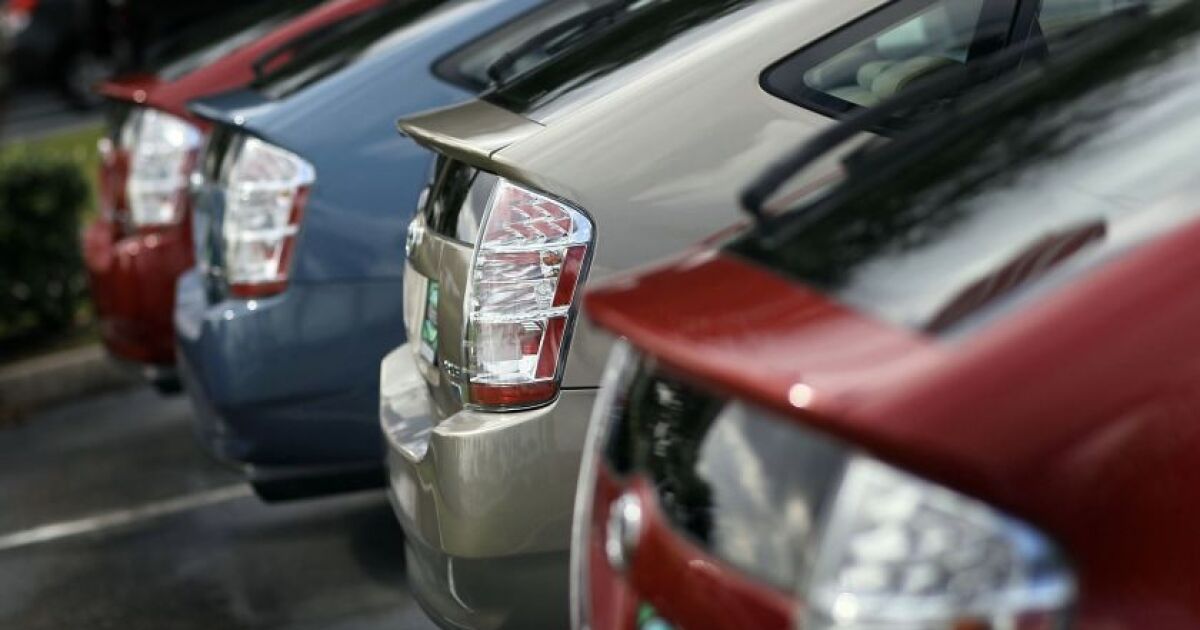 The automaker Toyota appears determined to take the adage that “money talks” to extremes.

The company ranks first as the post-Jan. 6 financial supporter of members of Congress who voted that day against certifying the 2020 presidential election results.

Since then, Toyota has made political contributions to 37 of the 147 senators and representatives whose vote placed them in lock step with the conspiracy theory promoted by former President Trump that the election was stolen from him. The conspiracy claim fueled the insurrection at the U.S. Capitol.

We do not believe it is appropriate to judge members of Congress solely based on their votes on the electoral certification.

The contribution statistics come to us via the activist organization Citizens for Responsibility and Ethics in Washington, or CREW.

Its database shows that Toyota has contributed to more members of what CREW calls the “sedition caucus” than any other major donor. The company’s contributions to election-denying members and their leadership political action committees has come to $55,000 so far.

Let’s put these contributions in context. The Jan. 6 vote challenging the 2020 election, followed by the insurrection, were among the most serious attacks on American democracy in history.

The business community seemed to recognize its gravity, at least at first — nearly 200 corporate donors said in the aftermath that they would suspend or end donations to the 147 lawmakers. Toyota wasn’t among those taking that stand.

Since then, several companies have walked back their pledges. Many have returned to “giving like nothing ever happened,” Citizens for Responsibility and Ethics in Washington says.

This is essentially a financial analog to the assertions by some GOP leaders that nothing really serious occurred at the Capitol on Jan. 6, and the Republicans’ refusal to support a bipartisan investigation of the events.

What may almost have been worse than Toyota’s contributions themselves is the company’s explanation for its spending.

“Toyota supports candidates based on their position on issues that are important to the auto industry and the company,” the company told me in an emailed response it also sent to other news organizations.

“We do not believe it is appropriate to judge members of Congress solely based on their votes on the electoral certification,” Toyota says. “Based on our thorough review, we decided against giving to some members who, through their statements and actions, undermine the legitimacy of our elections and institutions.”

Let’s parse these words. First, Toyota acknowledges that its primary consideration in selecting the recipients of its political largesse is whether they support “the auto industry and the company.”

This is unsurprising, to be sure: One expects all political donors to use their money in support of their own narrow interests. But it’s a reminder that the interests of the auto industry and Toyota aren’t synonymous with the public interest. In fact, they’re generally incompatible with the public interest. Tell me again why companies should be permitted to make political contributions.

Further, Toyota doesn’t view the lawmakers’ votes against certifying the election as all that important. It doesn’t believe that those votes necessarily “undermine the legitimacy of our elections and institutions.”

The congressional vote was a formality; by federal law and historical precedent, a vote against certification was proper only when a state hadn’t legally certified its slate of electors, or when a state had submitted two opposing slates of electors.

Neither eventuality applied to the 2020 election. All 50 states and the District of Columbia had certified their slates when the question came before Congress on Jan. 6.

This isn’t the first time that Toyota has placed its policy decisions in opposition to the public interest.

In 2019, Toyota was one of three major automakers that lined up with then-President Trump in his effort to roll back federal emission and mileage standards and revoke California’s authority to set its own emission standards through a waiver from federal law. The others were General Motors and Fiat Chrysler.

As we observed at the time, Toyota and the other two were playing with fire.

They claimed to be acting to stave off the chaos of conflicting regulations, which would happen if California rules differed from federal rules. In fact, their action all but guaranteed chaos: California’s rules were coordinated with federal regulations and had been specifically adopted by about a dozen other states — they effectively set the national standard. Trump’s action was destined to tear apart this carefully fashioned unanimity.

Last year, California reached its own deal with five automakers — Ford, Honda, BMW of North America, Volkswagen Group of America and Volvo — to preserve its rules. Toyota and its fellow Trump followers were left out in the cold, more so after Trump lost reelection, as the Biden administration has been moving to exterminate the Trump rules.

GM has since moved to mend fences with the federal government by withdrawing from the Trump-era lawsuit aimed at overturning California’s waiver.

One salient point raised at the time of the Trump rollback effort was that GM, Fiat Chrysler and Toyota were among the worst performers in the auto industry in terms of clean-air standards.

GM and Fiat Chrysler ranked at the very bottom of the roster of 13 automakers whose performance on fleet mileage efficiency and carbon dioxide emissions had been measured by the Environmental Protection Agency between the 2012 and 2017 model years. Toyota was fifth-worst, and was also the only automaker whose performance had deteriorated in that time frame.

In the EPA’s follow-up analysis, bringing the statistics current to the 2019 model year, GM and Fiat Chrysler were still ranked at rock bottom and Toyota ranked fifth-worst. There was a slight difference in that Toyota actually had improved its performance over the earlier data, albeit only modestly.

The best performer in both analyses among legacy automakers was Honda, which had made the deal with California. The other California supporters all clustered around the middle of the pack except for Ford, which came in third-worst in both versions. The best-performing automaker in the more recent analysis is all-electric Tesla, which wasn’t ranked in the earlier analysis.

That brings us back to the Citizens for Responsibility and Ethics in Washington data. Most of Toyota’s contributions have gone to Republicans from the Deep South, Midwest or Southwest. According to the analysis, Toyota hasn’t contributed since Jan. 6 to House Minority Leader Kevin McCarthy (R-Bakersfield) or to any of the six other members of Congress from California who cast the shameful votes Jan. 6.)

The CREW data show that no other corporate contributor has given money since Jan. 6 to anywhere near 37 election-denying members. The insurance company Cigna has donated $42,500 to nine members and two GOP congressional campaign funds that support them. Koch Industries, the source of wealth of the right-wing Koch network, has given $17,500 to seven election deniers and an additional $105,000 to the committees. Fresenius Medical Care, a dialysis firm, has given $15,000 to six of the caucus members and $60,000 more to the committees.

Fresenius, a Germany-based healthcare conglomerate, contributed $27.5 million in 2018 to kill a California ballot measure that would have placed limits on dialysis fees.)

It’s still early in the current election cycle — the next congressional election is in November 2022 — so this analysis should be viewed as the canary in the coal mine. A smart bet would be that more corporations will see that their own interests lie, like Toyota’s, in making excuses for the Jan. 6 votes by federal lawmakers, and continuing to bestow dollars on those they think can do them a bit of good in the halls of Congress, never mind the threat to democracy.