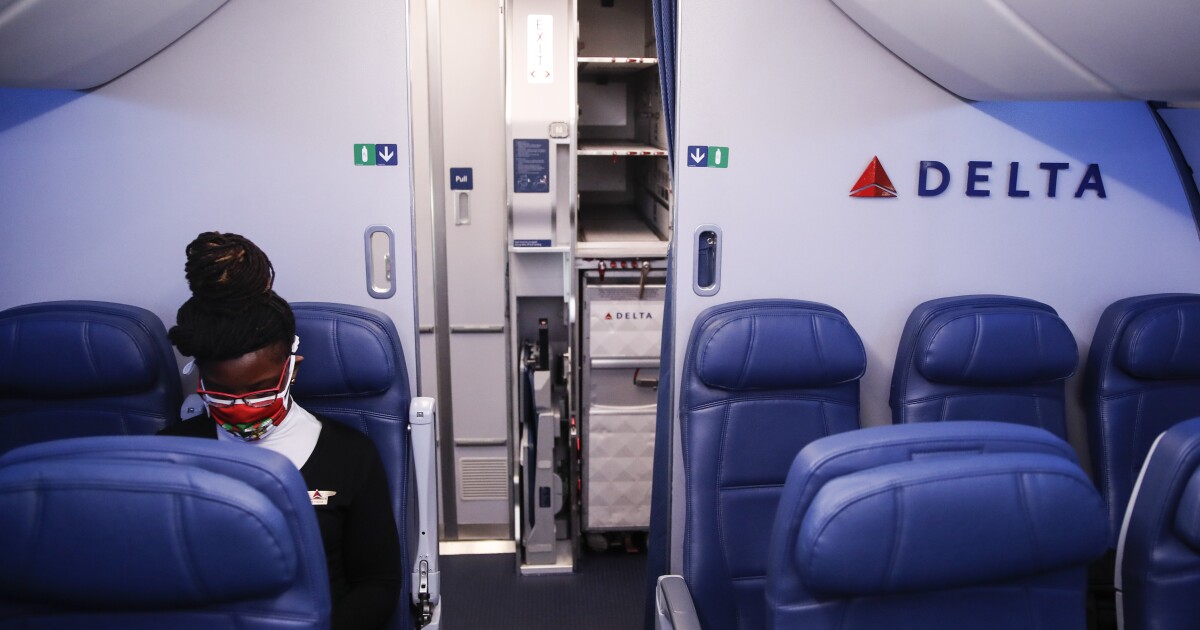 At first glance, the decision by Delta Air Lines on Wednesday to charge unvaccinated workers an extra $200 a month for health coverage seems to make sense.

The airline estimates it costs $50,000 in insurance claims every time an employee is hospitalized with COVID-19.

“This surcharge will be necessary to address the financial risk the decision to not vaccinate is creating for our company,” Delta’s chief executive, Ed Bastian, said in a memo.

There’s a cold logic to that: People who are more likely to get sick should pay more for health insurance.

But where does this slippery slope take us? Should people with cancer, or a genetic predisposition for cancer, pay more for coverage?

How about people with diabetes or heart disease? These can be very expensive ailments.

Should drinkers pay more for health insurance than teetotalers? What about the obese and overweight?

In theory, any employer offering group coverage could impose surcharges on workers it believes are engaging in unhealthy behavior or who are increasing the organization’s healthcare costs.

“The airline won’t say it, but this is a tax on bad behavior,” said Dana Goldman, dean of the USC Sol Price School of Public Policy. “The unvaccinated generate real costs to a business because of increased screening and hospitalizations — and shortsightedness is not a protected class.”

Although it appears Delta is trying to encourage healthy behavior rather than punish employees’ recklessness, he told me, “it is a fair question where the tax on bad behavior ends.”

I heard the same from other healthcare experts. Barak Richman, a law professor at Duke University, said, “Delta is trying to cut through the noise and convey something important to its employees — you need to get vaccinated.”

At the same time, he said, “we have to be very careful about imposing higher risk costs on some over others.”

As a person with Type 1 diabetes, I’m familiar with Delta’s argument. I’ve heard it before.

My genetic misfortune represents thousands of dollars in annual medical costs for insulin, a blood-sugar monitor, an insulin pump and regular checkups.

In light of all that, shouldn’t I pay more for coverage than someone without all these fixed costs?

The answer, of course, is no, for one very simple reason: Everyone can get sick.

Health insurers manage this risk by having a large pool of policyholders, healthy and sick, contribute regularly to a big pot of money, from which the insurer pays people’s medical expenses.

If you never get sick, well, you’re very lucky from a healthcare standpoint, even if you may feel shortchanged after years of premium payments.

If you do get sick — and odds are you will at some point — then your years of premiums are now paying off. This is what you planned for.

Delta is trying to pressure the unvaccinated to behave more responsibly during a global public health crisis. “Freedom of choice” is a selfish and foolhardy rationale for refusing to be vaccinated.

Needless to say, if prior generations of Americans had behaved this way, we’d still be facing thousands of deaths annually from smallpox, polio and other illnesses that have been largely eradicated thanks to widespread vaccination programs.

Delta’s Bastian said about three-quarters of the company’s roughly 75,000 employees are already vaccinated. So he’s targeting the remaining 19,000 or so who have chosen, for whatever reason, to forgo getting shots.

The “aggressiveness” of the Delta variant, he said, “means we need to get many more of our people vaccinated, and as close to 100% as possible.”

He’s absolutely correct. And because some wildly imprudent public figures have chosen to politicize vaccines during a pandemic, it’s now up to employers to take the lead in safeguarding the population.

A growing number of companies are making vaccination a condition of employment, or at the very least a prerequisite for entering the workplace. Goldman Sachs this week became one of the latest businesses to adopt this reasonable approach.

Turning the fiscal screws on the sick or potentially sick, on the other hand, while perhaps an effective way of influencing people’s behavior, is just bad public policy.

Taken to its logical extreme, it means anyone who, for any reason, represents a greater financial risk to America’s $4-trillion healthcare system should pay more.

Not everyone sees it this way. Frank Lichtenberg, a professor of healthcare management at Columbia Business School, told me Delta is simply responding to some employees’ personal choices.

“Most people don’t choose to have cancer, diabetes, heart disease and other illnesses, although their lifestyles may increase their risk of doing so,” he observed.

Lichtenberg also noted that the higher probability of unvaccinated workers making other Delta employees sick represents what economists call a “negative externality” — an action that could cause harm to others.

“Most economists believe that imposing financial penalties, such as taxes, is an appropriate way to address negative externalities,” he said.

I asked if smokers should similarly pay more for coverage in light of their potentially harmful personal choice.

In fact, the Affordable Care Act allowed insurers to charge smokers up to 50% more than nonsmokers.

“Hardly any did, possibly because of difficulties in verifying smoking status,” said Joseph P. Newhouse, a professor of health policy and management at Harvard Medical School. “That seems to cut a bit against the slippery slope argument.”

Or it reflects a recognition among insurers that they’d catch hell from millions of smokers for imposing surcharges on behavior that’s been around since the country’s foundation.

California is among a handful of states that prohibits imposing higher insurance rates on smokers. California lawmakers wanted to make clear that no one should be discriminated against when it comes to health insurance — even when unhealthiness is a personal choice.

I appreciate where Delta’s coming from. Unvaccinated people are a danger to themselves and others, and they represent a greater financial risk to businesses.

But the slippery slope is very real. Delta’s case for a $200 rate hike is based almost entirely on economic reasoning — unvaccinated workers are more likely to be hospitalized and hospitalization is expensive.

If you or anyone you know has a chronic illness, this should be taken very seriously. Sick people can be costly to treat, and this is a liability for insurers and employers.

One solution is to follow the example of almost all other developed countries and affordably cover the entire population with a single-payer insurance system.

Another is to penalize the sick, or the potentially sick, with higher coverage costs. Call it healthcare tough love.

Or call it what it really is: inhumane.

Tags: Los Angeles News
Previous Story
Baldwin Hills Crenshaw Plaza gets a new owner with plans to modernize the center
Next Story
Column: The lab leak theory for the origin of COVID-19 is fading