Column: Don’t give Coca-Cola and Delta too much credit for stance on Georgia voting law

Homepage News Column: Don't give Coca-Cola and Delta too much credit for stance on Georgia voting law
News

Column: Don’t give Coca-Cola and Delta too much credit for stance on Georgia voting law 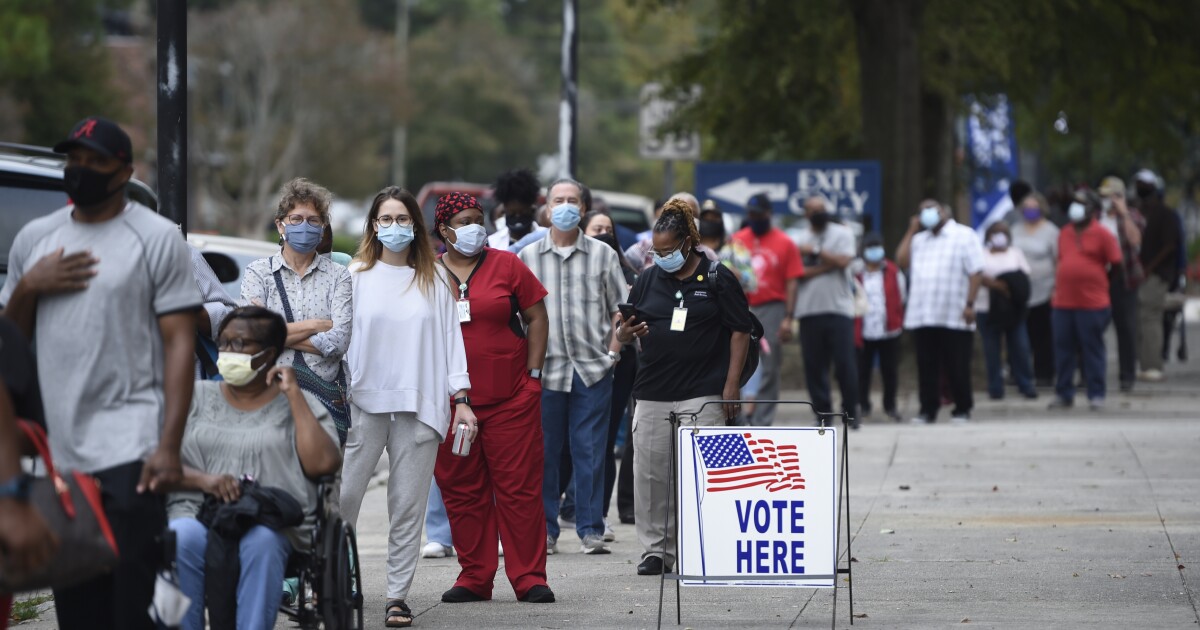 In accordance with the well-known principle that every political outrage eventually yields to an equal and opposite complacency, the initial uproar over Georgia’s voter law has lately given way to a spate of “it’s-not-that-bad-after-all” punditry takes.

A representative example of this comes from Will Saletan of Slate, who in a facile Twitter thread divides the law’s provisions into “good stuff,” “bad stuff” and “overhyped.”

Another newspaper analysis credulously asserts that the law is “unlikely to significantly affect turnout or Democratic chances” and “could plausibly even increase turnout.”

It’s been dismaying to see some of the coverage saying that those who are worried about the law’s driving down turnout are overhyping it. That’s the wrong take.

These arguments track those of Georgia’s Republican Gov. Brian Kemp, who signed the law behind locked doors March 25 and is happy to blame the blowback on “liberal activists.”

So let’s get the basics out of the way promptly. The Georgia law isn’t as bad as its critics say; it’s much, much worse, in ways that election law experts fully understand.

“It’s been dismaying to see some of the coverage saying that those who are worried about the law’s driving down turnout are overhyping it,” says Charlotte Hill, an elections expert at UC Berkeley. “That’s the wrong take.”

A somewhat different variety of complacency has infected Georgia’s leading corporate citizens, notably Delta Air Lines and Coca-Cola Co., which are both headquartered in Atlanta.

Neither company spoke out publicly against the law while it was making its way through the Georgia Legislature. Both spoke out against it after it was signed and they came under pressure to take a stand. Both have called it “unacceptable.”

But as Judd Legum of Popular Information has documented, both corporations were campaign contributors to the legislators who supported the bill. Neither company has said what it’s going to do about it, now that the horse has left the barn.

Let’s examine what the complacency caucus gets wrong about the Georgia bill.

Start with the increasingly common notion that cutting back on absentee voting, as the bill does, will have little effect on voter turnout. The measure forbids mass unsolicited mailings of absentee ballots, shortens the window in which voters can request them, raises identification requirements for those who cast them and places limits on the number and location of drop boxes where ballots can be deposited.

The problem with that logic, Hill told me, is that much of that research dates from more than 10 years ago, when the absentee voting cohort was dramatically different from today.

Back then, the voters most affected by the expansion were older, already committed voters (who typically leaned Republican). There wasn’t likely to be much of an increase in turnout among voters who already tended to turn out in force.

The 2020 election, however, occurred during a pandemic. States expanded the availability of mail-in ballots, amid massive get-out-the-vote drives by Democrats, aimed at younger voters and voters of color who were encouraged to take advantage of the liberalized rules.

The truth is that states that have massively expanded voting by mail and made voter registration easier have seen significant increases in voter participation. That’s the evidence from Oregon, Washington, Utah and Colorado, among other places.

According to a comprehensive study of the 2018 midterm elections, the states with the top 10 turnout rates had either same-day voter registration or voting at home, or both. They ranged from Iowa, with 58% turnout, to Minnesota, with 64%. Of the 10 states with the worst turnout, eight required registration at least four weeks before an election — ranging from Texas, with 46% turnout, to Arkansas, with 41%.

Research shows that switching to all-mail voting can have an immense effect on turnout. In Colorado, for example, all-mail voting (in which ballots are sent out by mail and can be returned by mail or dropped off at designated secure places) increased turnout by 9.4 percentage points, a margin almost unheard of among voting experts.

The research, by Hill and three colleagues, also found that the increase was especially large among young people (up to 15 percentage points), blue-collar workers, those with less educational attainment, and voters of color. That suggested that voting by mail helps to reduce inequalities in access to the ballot box, the researchers found. But they found little evidence that the changes helped either party more than the other.

Space constraints keep us from going deeper into the many provisions in the Georgia law that will have the effect of subtly raising barriers to registration and voting in densely populated parts of the state, which tend to lean Democratic.

Suffice to say that anything that adds steps to the registration process or lengthens the waiting time to vote is bad — and that’s not to mention the cartoonishly malevolent criminalization of providing voters in line with water or nourishment.

What’s most telling about the Georgia law — and the proposals in dozens of states looking to Georgia’s law as a model — is that it does virtually nothing to make voting easier. Even the “good stuff,” as Saletan labels it, is misleadingly “good” — it enhances some ballot access in less populated precincts, but does little in the urban areas where access has been an issue.

Moreover, the law in its entirety is predicated on the notion that Georgia’s elections were insecure — so insecure that they may have deprived Donald Trump of the state’s electoral votes. That’s a lie.

That brings us to the role of Georgia’s corporate elite. Delta and Coca-Cola both say they worked behind the scenes during the drafting process to remove some especially egregious provisions from the voting bill, but that won’t do.

If they had been really concerned, they would have gone public long before March 25. They would have announced publicly that they would contribute nary a dime to any legislator acting to narrow voting access.

If they really were involved during the drafting, then they wouldn’t be caught flatfooted now.

Delta Chief Executive Ed Bastian said March 31 that he’s just now had the time to “fully understand,” thanks to “discussions with leaders and employees in the Black community, [that] the bill includes provisions that will make it harder for many underrepresented voters, particularly Black voters, to exercise their constitutional right to elect their representatives.”

But most of their actions have been after the fact. Neither company has committed itself to withdrawing financial support from the state legislators who perpetrated the voting bill. Indeed, the only entity that has put its money where its mouth is has been Major League Baseball, which pulled the All-Star game out of Atlanta.

Nevertheless, their weak-tea statements—along with those of more than 200 corporations and a group of 72 Black corporate executives opposing vote-suppression laws—elicited a spectacularly hypocritical reaction from Senate Republican leader Mitch McConnell of Kentucky.

“My advice to the corporate CEOs of America is to stay out of politics,” McConnell said, warning of “serious consequences if they become a vehicle for far-left mobs to hijack our country from outside the constitutional order.” (Whatever that means.)

As Legum points out, McConnell has accepted more than $4.3 million in corporate contributions in just the last five years. If they truly stayed out of politics, that would be the cost to him. But they won’t, because they almost always get what they want out of politics—tax cuts, lax regulations, indulgent enforcement, etc. etc.

Delta, Coca-Cola and Georgia’s other major employers could have stopped that state’s measure in its tracks, if they had had the spine to do so. Coke didn’t reply to my request for comment, and Delta referred me to Bastian’s March 31 statement.

In America’s election system, money talks and big business has a gold-plated megaphone. With voter suppression laws in the hopper in 47 states, corporate America will have many more opportunities to makes its voice heard.

The time to pretend that they were surprised by the implications of the Georgia law is long past. The very fact that it was under consideration was damning evidence of its purpose; to think otherwise bespeaks an implausible naivete.

“We need to take more seriously,” Hill says, “that lawmakers have a good idea of what the impact of this law will be.”