Column: Elon Musk is giving $150 million to charity. What a cheapskate

Column: Elon Musk is giving $150 million to charity. What a cheapskate 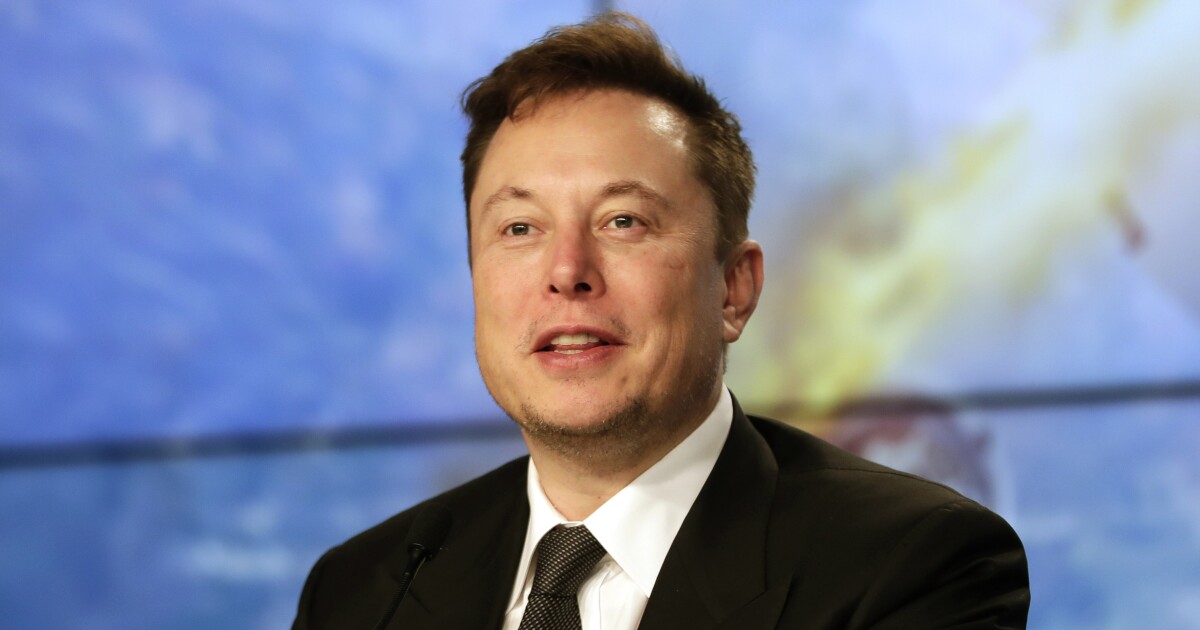 Elon Musk, you may have noticed, has gotten a lot of attention recently.

It’s not only that he was chosen to host “Saturday Night Live” on May 8 or that there was another fatal crash under suspicious circumstances of a car made by his company, Tesla, but also a surge in his charitable spending.

In just the first four months of this year, Vox.com reports, Musk has donated $150 million to philanthropic causes. That sounds like a lot of money. Vox calls it a “philanthropic spending spree.”

It’s wonderful that Mr. Musk is giving away some of his wealth, but apple pie is also great and so is calling your mother on her birthday…But none of those things excuse us from our obligations to pay our fair share of taxes.

There’s another way to think about it, however. One could interpret it as marking Elon Musk as one of the world’s outstanding cheapskates.

That’s because, as a proportion of Musk’s total net worth, which was estimated by Bloomberg’s Billionaires Index as $187 billion on Sunday, $150 million is about eight-hundredths of a percent, or comparatively less than pennies.

I can’t be entirely sure of this, but I believe I’ve witnessed commuters fork over a larger proportion of their net worth to panhandlers on the subway.

For another metric, consider that if Musk continued giving away his fortune at this rate, say $600 million a year, it would take him 311 years to give it all away.

It’s possible that Vox underestimated Musk’s philanthropy, since there’s no system in the U.S. for publicly tracking all charitable donations. Musk may have given away more money but anonymously.

Also, Musk’s fortune rises and ebbs with the value of Tesla stock, which is his major asset. (He owns about 20% of the company.)

As I write, the shares are worth about $736 each; a year ago, they were worth closer to $160 and Bloomberg estimated his fortune at about $40 billion.

The Musk Foundation, which appears to be his one public instrument for philanthropy, reports its income and outflow every year, but its latest public report only covers the fiscal year ended June 30, 2019. (The foundation reported contributions and grants of about $10 million over that period, ending with $207.8 million in assets.)

But Musk’s charitable endeavors, such as they are, speak volumes about super-wealth in America and the role of good works in preserving it.

Many billionaires have become concerned about both the optics and the reality of the mismatch between extreme wealth and society’s ability to solve pressing problems such as poverty and the lack of access to education and healthcare.

More than 200 billionaires, for example, have signed on to the “Giving Pledge,” which was devised by Bill and Melinda Gates and Warren Buffett as a moral commitment to giving away at least half their fortunes either during their lives or in their wills. Musk is a signatory, though unlike some adherents he hasn’t provided a written list of preferred causes or a description of his approach to philanthropy.

Others have pondered how the U.S. economy, particularly the tax code, has been structured to advantage the accumulation of wealth at the top while eroding the resources needed to address social needs.

The result is a system that cedes decisions about which social maladies should be addressed and how to self-interested billionaires, rather than to the community as a whole.

“It’s wonderful that Mr. Musk is giving away some of his wealth, but apple pie is also great and so is calling your mother on her birthday,” says Morris Pearl, a former investment executive who now heads Patriotic Millionaires, an organization of high-net-worth individuals advocating for “a highly progressive tax system, a livable minimum wage, and equal political representation for all citizens.”

“But none of those things excuse us from our obligations to pay our fair share of taxes,” Pearl told me. “We need a certain amount of resources that are allocated based on the democratic process, through our voting for elected representatives.”

Musk’s contributions, as described by Vox and gleaned from public disclosures, provides a window through which to start considering the shortcomings of private philanthropy compared to public program spending.

His spending includes $1 million to Feeding Texas, which operates food banks in that state. According to Vox, Jared Birchall, the head of Musk’s family office and an officer of the Musk Foundation, reached out to the organization after reading a tweet about it and offered a $100,000 donation.

When freezing weather struck Texas this winter, Celia Cole, the head of the organization, reached out to Musk again, and he raised his donation to $1 million.

Residents of his new home state no doubt welcomed the help, but it points to the question of why a state should be so incapable of feeding its poorest citizens that a private organization has to sponsor food banks and reach out to an individual to do so.

One answer is that Texas has no state income tax. That’s probably part of its allure for Musk. But the result is that Texas has notoriously underfunded public services (as well as having a hostility to regulation that contributed heavily to the suffering of its residents in the recent deep freeze).

It’s also proper to point out that Musk might not be a billionaire in the first place were it not for the generous tax incentives — offered by the federal government and the state of California, among other jurisdictions — that encourage people to buy his cars. There are also billions of dollars in government incentives that his companies, Tesla and SpaceX, have collected to locate factories in Nevada, New York and Texas.

Charitable contributions by Musk bear the flaws of many billionaire philanthropies — they’re saddles on the donors’ personal hobbyhorses.

The Musk Foundation donated $475,000 to the Tesla Science Center, a sort of science museum at the site of the old Long Island lab of inventor Nikola Tesla, the namesake of Musk’s car company, and $1.5 million for artificial intelligence research at the Future of Life Institute, where Musk serves as a member of the science advisory board. There are also large donations to the Flint, Mich., schools and to a catch-all philanthropic fund sponsored by Fidelity.

None of these donations is objectionable in isolation, of course. But on its face Musk’s donations are scattershot — if you can get through to him or you sponsor a charity that sparks his interest, you can win a jackpot. Is that the best way to ensure that the most pressing needs are addressed by society?

The bedrock principle of billionaire philanthropy is the notion that the rich have a special skill for deciding how to deploy their wealth for the betterment of all. That’s a dubious proposition. It was most directly articulated by billionaire Michael Dell at the billionaires’ festival in Davos, Switzerland, in 2019. There he dismissed calls for higher taxes on the super-wealthy by asserting that he contributed to society plenty, via a family foundation.

“I feel much more comfortable with our ability as a private foundation to allocate those funds,” he said, “than I do giving them to the government.”

This is the same Michael Dell who structured his 2006 acquisition of the luxury Miramar hotel in Santa Monica to avoid nearly $315,000 in property taxes. It’s proper to note that Dell’s multibillion-dollar fortune is based on mail and online orders of computers — in other words, on infrastructure created and funded by the government he disdains.

Foundations like Dell’s, Musk’s and the Gates’ do good work, but so do government programs devoted to feeding the poor, educating children at all income levels, and eradicating disease. As Pearl asks, why should those efforts be entrusted to a private family, rather than to the community at large via its elected officials?

America’s wealthiest have the money to spend on their good works in part because the American tax system promotes the creation of immense fortunes and allows them to be passed down through generations. This is a system that would have appalled Founding Fathers such as Thomas Jefferson, who objected to such concentration of wealth.

It’s enabled in part by our capital gains tax system. As I reported recently, the system is stacked in favor of the rich. That’s because they don’t have to pay taxes on their asset-based wealth until they sell the asset — and if they hold on to their stocks and bonds through their lifetimes, the embedded tax liability is extinguished completely for their heirs.

That’s the best argument for the wealth tax advocated by Sen. Elizabeth Warren (D-Mass.), among others — it captures some of the taxable value of accumulated wealth during the holder’s lifetime — and also for eliminating the step-up in cost basis of assets that eliminates all tax liability when they’re passed to the next generation.

Many billionaires, however, take proposals to place collars on their wealth as personal insults. Leon Cooperman, a hedge fund billionaire, erupted in profane fury at Warren’s proposal in 2019. Cooperman, whose relocation from New Jersey to Florida took him from a high-tax state to one without income taxes, complained that Warren was trampling on the American dream of raising oneself by one’s bootstraps.

Multimillionaires and billionaires love to describe themselves as “self-made,” but the truth is that every fortune is the product of other people’s labor — the low-wage workers overseaswho assemble Michael Dell’s computers, or the taxpayers who fund the roads, bridges and airports that help keep their businesses profitable.

The more that extreme wealth is concentrated in the hands of a small number of families, the less is society able, through its elected government, to support the services and infrastructure that made them rich.

This isn’t a sustainable trend. The wealthy enjoy taking credit for fighting poverty and disease, but a lot of those social ills arose because their own accumulation of wealth left the rest of us unable to carry on the fight ourselves.