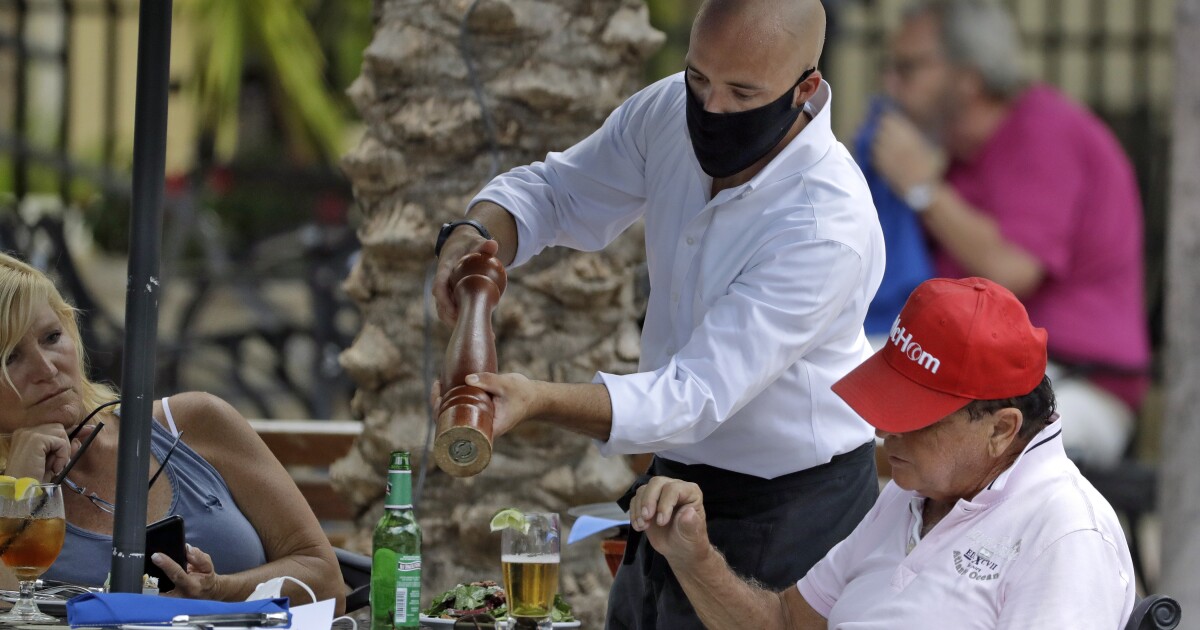 Nothing is more satisfying than finding evidence that confirms one’s own expectations. So it can’t be surprising that the news landscape is getting filled with stories about businesses that can’t find workers because everyone’s staying at home collecting big unemployment checks from the government.

Earlier this month the Dispatch, a conservative website, compiled a sheaf of such yarns from a dozen restaurant and bar owners in Ohio and Florida and delivered their assessment that “the generous government benefits are the primary impediments to hiring.”

Lamentations by employers are everywhere. “We are short-staffed,” says a notice at a Sonic fast-food restaurant in Albuquerque, posted online by local TV reporter Patrick Hayes. “No one wants to work anymore.”

Common sense tells you that if you want people to go back to work then government can’t be an unfair competitor by paying people not to work.

“It is just making it practically impossible for businesses to get people back to work,” he said. “Common sense tells you that if you want people to go back to work then government can’t be an unfair competitor by paying people not to work.”

This argument does carry a certain amount of intuitive logic. Given the choice between working a restaurant job or lazing about and collecting $1,000 a week or more ($600 from the federal government plus state benefits of at least $235, the floor set by the stingiest state, Mississippi), who would opt for the former?

Followers of labor-management debates will recognize this notion as a cousin of the “undeserving poor” trope so often wielded by conservatives to rationalize cutbacks in government anti-poverty programs.

The underlying idea is that what keeps individuals mired at the low-income rung of the economic ladder are their own moral failings. Offering them a hand up — or a handout, as it’s often described — just encourages them in their bad habits.

Never mind that the purveyors of this trope are often feeders from the government trough themselves — Grassley, for example, collected $1.6 million for his family farm from 1995-2017.

The intuitive argument against continued unemployment relief, moreover, isn’t backed up by facts. Anecdotes, it should be remembered, are not data, and in this case the data flatly contradict the anecdotes. Let’s examine what really may be happening.

Quite the opposite: A study published in June by the Federal Reserve Bank of Chicago found that “those currently receiving UI benefits search intensely for new work” at a level that seems “somewhat greater than that of the unemployed not receiving benefits.”

The $600 weekly benefit enacted last year under the CARES Act, however, was historically generous. Wouldn’t that make a difference?

Not according to Arindrajit Dube of the University of Massachusetts, who could find no evidence that the end of the $600 benefit boost led to any differences in employment recovery between states with generous benefits and those with less-generous benefits.

The result prompted Dube to conclude that “the unprecedentedly generous UI benefit levels during the Covid crisis did not have any substantially negative effect on jobs.”

The most telling data point comes from the Bureau of Labor Statistics, which reported that payrolls surged in March by an astonishing 916,000 jobs. Someone must be hiring.

It’s only fair to accept the restaurant and bar owners’ testimony that it’s difficult for them to staff up as the pandemic ebbs. The key question is what’s causing the difficulty. Blaming unemployment benefits seems entirely too facile.

To begin with, let’s observe that bar and restaurant work is typically low-paid, arduous and, in the context of the pandemic, unusually hazardous.

It requires face-to-face contact with customers without knowing how rigorously they’ve hewed to social distancing in their personal lives, or whether they’ve been immunized.

Anecdotes such as those retailed by the Dispatch don’t provide much context about the workplaces or the business owners. But here’s some about Bill Anderson, the owner of Dale’s Diner in Waterville, Ohio. He provided the Dispatch’s lead, in which he says he’s shuttering his restaurant because he can’t hire enough staff, despite raising the minimum wage for a line cook to $11 an hour.

In October, according to the Toledo Blade, Anderson went on a tear about Ohio’s mask restrictions. Ohioans were experiencing “tyranny” under Gov. Mike DeWine’s health mandates, Anderson wrote on Facebook.

In an interview, the newspaper reported, “Mr. Anderson made clear he believes the response to the pandemic has not been guided by science, but instead by animus toward President Trump by U.S. and world leaders.”

Anderson also “cast doubt on the amount of people who have died of coronavirus in the United States, stating that the virus isn’t more dangerous than similar flu outbreaks….Mr. Anderson also expressed a common conspiracy theory that doctors are fraudulently coding deaths as due to coronavirus for financial incentive.”

Anderson said, “The cure has become much worse than the disease,” echoing almost word-for-word a remark uttered by Trump only days earlier in defense of his aggressive push to reopen businesses in the face of the rising pandemic: “We can’t let the cure be worse than the problem.”

That suggests that Anderson’s workers may be weighing their possible exposure to a deadly disease against the value of $11 an hour for an employer accepting of every dumb COVID-19 conspiracy theory in the air.

The Dispatch wonders why America would still keep doling out enhanced unemployment benefits — the federal stipend has been reduced to $300 a week in addition to state benefits, through the first week of September — what with “the pandemic receding,” among other factors.

Yet the pandemic isn’t receding everywhere: The seven-day average of new daily cases reached nearly 70,000 over the weekend, up from 55,000 a month ago. The enthusiasm with which many states and communities are reopening may keep that trend from reversing.

The Dispatch, to its credit, does begrudgingly mention other factors that may be contributing to a dearth of low-income workers, though it nevertheless maintains that generous unemployment is the prime factor.

Among the others: Many would-be employees are still fearful of coming into contact with potentially contagious customers or co-workers.

Some may be caring for school-age children at home — Ohio instituted in-school K-12 teaching on March 1, and as of last week 89 of its 609 school districts were still teaching partially remotely — or may be unable to find child care for preschoolers. And some may have found other, better jobs in a newly resurgent economy, making low-wage work in a diner less inviting.

PSA: if you find some workers are somewhat unwilling to enter a sector (restaurants) where risk of infection is still not negligible, consider twice before you attribute it to overly generous UI.

After all, we heard a lot of this last summer too, which turned out to be false.

When that happens, employers have little choice but to raise pay — perhaps higher than the $11 an hour Anderson is offering. If he can’t find enough staff to keep his diner open at $11, he may have to bite the bullet.

As Dube tweeted earlier this month: “[I]f you find some workers are somewhat unwilling to enter a sector (restaurants) where risk of infection is still not negligible, consider twice before you attribute it to overly generous UI.”