Column: Facebook and Amazon launch a personal attack to unseat a tough regulator

Column: Facebook and Amazon launch a personal attack to unseat a tough regulator 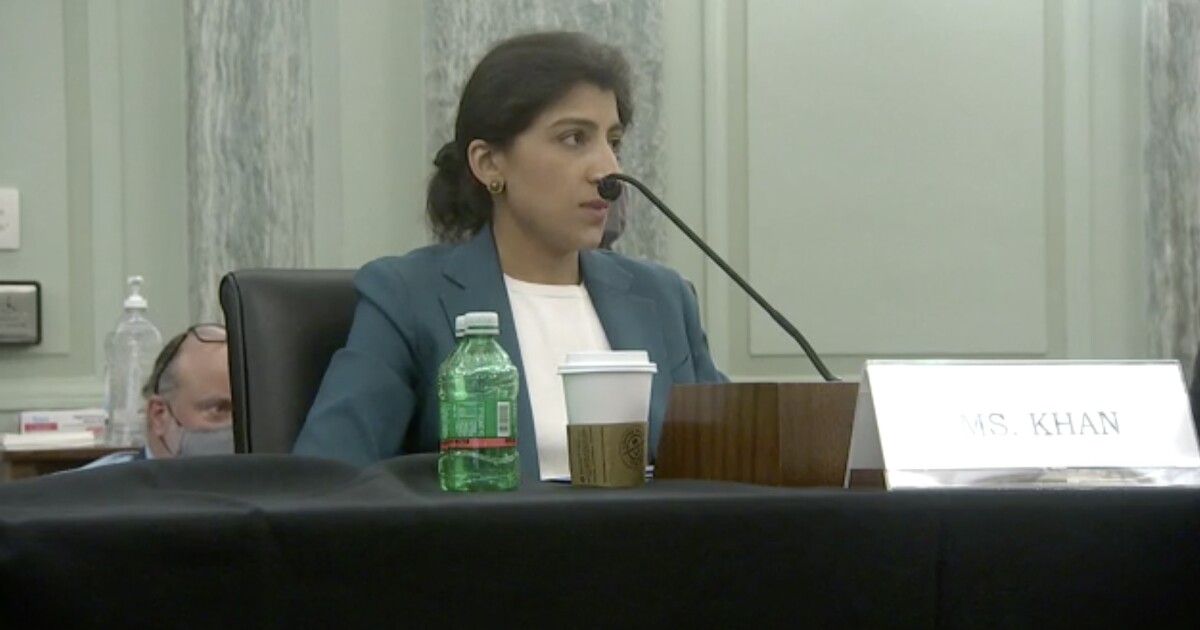 To any rational observer, Lina Khan is exactly the kind of person one wants to be chair of the Federal Trade Commission.

The FTC is responsible for seeing that businesses don’t stifle competition and that they act in the public interest.

Those goals have been central to Khan’s work as an academic and a staff member of congressional committees, on which she focused on the monopolizing tendencies of big tech companies.

With its missionary zeal for consumers, Amazon has marched toward monopoly by singing the tune of contemporary antitrust.

That’s why President Biden nominated her to be FTC chair and why she was confirmed to the post in an overwhelmingly bipartisan Senate vote last month.

Facebook and Amazon don’t see things that way. No surprise, since they’re today’s leading examples of concentrated corporate power. Both companies have filed petitions with the FTC demanding that Khan recuse herself from any proceedings against them.

Facebook’s petition was filed Wednesday, Amazon’s on June 30. They make essentially the same arguments, cite the same legal precedents, and suffer from the same logical shortcomings.

In effect, they say that Khan should remove herself from their cases because she knows all too much about them.

The Amazon and Facebook arguments are shot through with absurdities, though that doesn’t mean that federal judges might not find in the companies’ favor if the issue reaches their courtrooms.

One is the notion that government regulators should come to their jobs as innocent as babes, with no prior experience in examining corporate behavior or understanding of how the law applies.

Another is the more specific idea that Khan’s knowledge of the companies’ practices, developed through painstaking study and through official investigations on Capitol Hill, and relentlessly voiced publicly, should be automatically disqualifying.

Then there’s the demoralizing truth that government regulators almost always end up in bed with the companies they oversee, a phenomenon so common that it has a name: “regulatory capture.”

There’s the aspect in these petitions of special pleading — Khan appears to be un-capturable, which is why her targets have the knives out. Obviously, businesses never complain when a regulator’s bias tilts in their favor.

The best recent example of this is Ajit Pai, whom Donald Trump installed as chair of the Federal Communications Commission.

Pai spoke ceaselessly of his intention to repeal network neutrality protections the FCC had imposed during the Obama administration. Eventually he did so, a boon for incumbent internet service providers, not least of which was Verizon, for which he had worked as an in-house lawyer.

As FCC chair, Pai even joked about his history of connections at Verizon, despite its posing a glaring conflict of interest. Khan, it should be noted, doesn’t have this sort of conflict of interest; she’s being attacked by Facebook and Amazon because of her knowledge.

Finally, there are the strong indications that, even were Khan to step away from cases against Amazon and Facebook, the rest of the FTC, which is divided 2-2 between Republicans and Democrats, might pursue them anyway. As is evident from the confirmation vote, discontent with big tech crosses partisan lines.

Khan has declined to commit herself to recusals in this case or any other. “I have none of the financial conflicts or personal ties that are the basis for recusal under federal ethics laws,” she said at an April 21 Senate confirmation hearing. She said that in any case before the commission, she would “follow the evidence wherever it leads me.”

If she refuses to step away from the Amazon and Facebook cases, the other four commissioners could vote on whether to force her to do so.

Let’s take a look at the bills of particulars advanced by Facebook and Amazon against Khan. We’ll start with Facebook because it’s more urgent. On June 28, federal Judge James Boasberg threw out an antitrust lawsuit brought last year by the FTC and 46 states against the giant social media company but gave them 30 days to file an amended complaint.

The deadline expires on July 28; Facebook wants Khan off the case before the commission votes on whether to refile, since she otherwise would “inevitably play a pivotal role” in that decision.

Facebook contends that it has no chance of receiving an unbiased consideration from Khan because she has already committed publicly to factual and legal conclusions about the company’s guilt.

“Khan has consistently made public statements not only accusing Facebook of conduct that merits disapproval,” the company says in its legal filing, “but specifically expressing her belief that the conduct meets the elements of an antitrust offense.” (Emphasis in the original.) Facebook disputes her conclusions.

Facebook points to Khan’s work as legal director at the Open Markets Institute, a nonprofit that consistently called for breaking up Facebook by reversing government approvals for its acquisitions of WhatsApp and Instagram, which might have emerged as Facebook competitors had they remained independent.

This idea is hardly unique to Khan or the institute — it was the core of a breakup proposal issued by Sen. Elizabeth Warren (D-Mass.) during her campaign for the Democratic presidential nomination last year.

Also sticking in Facebook’s craw is Khan’s role in a House antitrust subcommittee investigation of the domination of digital markets by Facebook, Google, Amazon and Apple, completed last year with the issuance of a damning 450-page report.

Khan was a counsel to Democrats on the subcommittee that conducted the inquiry, which memorably warned that companies, which “once were scrappy, underdog startups that challenged the status quo have become the kinds of monopolies we last saw in the era of oil barons and railroad tycoons.”

Khan also has written academic papers and tweets expressing her view of Facebook’s antitrust culpability. But it’s proper to note that much of her most recent comments, including positions taken by the Open Markets Institute, supported an action already taken by the FTC. That is, the filing of the antitrust lawsuit against Facebook.

In other words, the FTC plainly came to the legal and factual conclusions expressed by Khan even before she joined the commission.

Amazon, in its screed, touches upon the Open Markets Institute and House subcommittee issues. But the bulk of its petition is focused on an article she published in the Yale Law Journal in 2017, while she was a law student, and the themes she developed in the paper and continued to voice in subsequent years.

The article, titled “Amazon’s Antitrust Paradox,” made Khan’s reputation. Its main point was that Amazon was the beneficiary of a wrongheaded approach to the law by antitrust regulators in recent years.

“Antitrust doctrine views low consumer prices, alone, to be evidence of sound competition,” Khan wrote. “By this measure, Amazon has excelled; it has evaded government scrutiny in part through fervently devoting its business strategy and rhetoric to reducing prices for consumers.”

Referring to Amazon’s founder and guiding spirit, Jeff Bezos, she added: “It is as if Bezos charted the company’s growth by first drawing a map of antitrust laws, and then devising routes to smoothly bypass them. With its missionary zeal for consumers, Amazon has marched toward monopoly by singing the tune of contemporary antitrust.”

Amazon, like Facebook, contends that these insights make it impossible for Khan to give the company “a fair consideration … that is neutral and impartial.” It says Khan’s “anti-Amazon convictions” are so “integral to her professional credibility” that she couldn’t reverse herself without blowing her reputation.

What does the law say about this argument? It’s equivocal. Both companies point to a 1970 ruling in which a federal appeals court overturned an FTC action against a vocational school because then-FTC Chair Paul Rand Dixon had made public statements indicating it was guilty of false advertising. The court ordered the FTC to reconsider the case, without Dixon’s participation.

But they ignore another case, from 1979, involving an FTC action over TV advertising targeting children. In that case, the same court refused to order the recusal of then-FTC Chair Michael Pertschuk even though he had spoken out against the advertising practice. (Pertschuk later voluntarily recused himself because his participation had become a distraction.)

The issue, therefore, could be a close call if it comes before federal judges. But the implications of the Facebook and Amazon petitions are dire. The core of active government regulation is the knowledge of regulators.

The ills we’ve suffered from indulgent government oversight, whether the issue is pollution, fraud or unrestrained monopolization, often stem from having regulators in place who are so ignorant of the issues at hand that they’re easily swayed by corporate lawyers or academic pundits.

If there’s anything indisputable about Lina Khan, it’s that she won’t be defenseless against self-serving arguments by slick corporate mouthpieces. No wonder Facebook and Amazon are in a panic.

Tags: Los Angeles News
Previous Story
Another stimulus is available for Californians. Are you eligible?
Next Story
Disney to relocate 2,000 California jobs to central Florida