Column: Facebook’s no-decision on banning Trump does no one any good

Homepage News Column: Facebook's no-decision on banning Trump does no one any good
News

Column: Facebook’s no-decision on banning Trump does no one any good 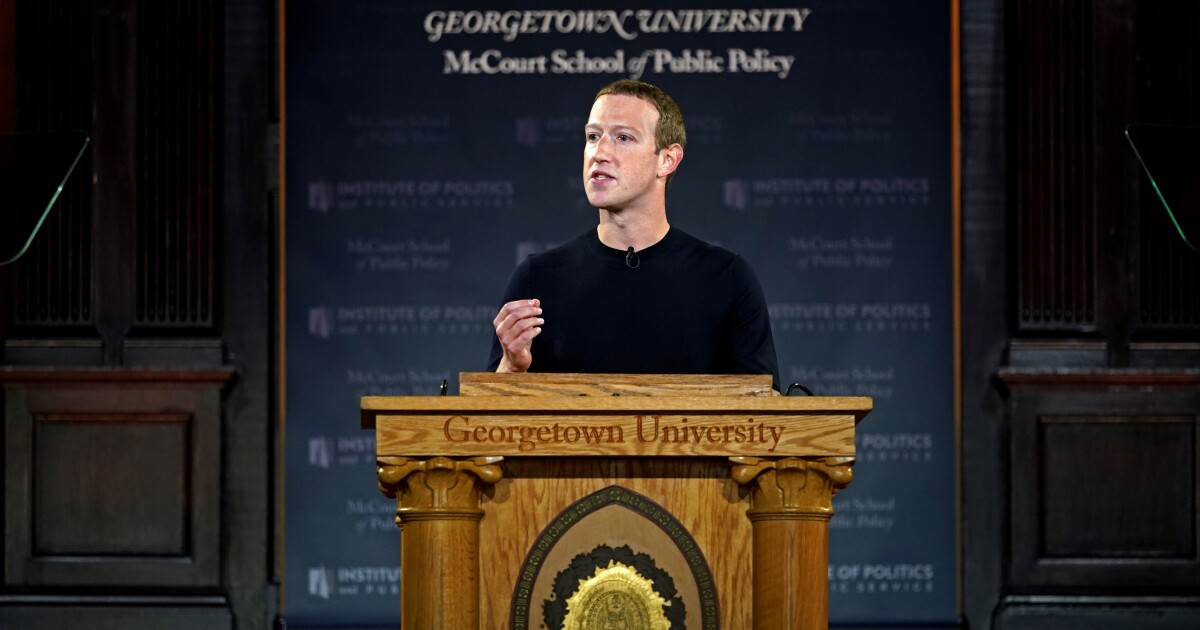 On the surface — but only on the surface — the Facebook Oversight Board’s decision Wednesday on the banning Donald Trump looks like a solid blow against the misuse of the platform’s global reach to foment violence and undermine democracy.

The ostensibly independent board, which Facebook established to mute criticism that it tolerates posts that spread hate, undermine human rights and foment violence, upheld several decisions by Facebook to restrict Trump’s access to the platform during the insurrection on Jan. 6 and afterward

Facebook should undertake a comprehensive review of its potential contribution to the narrative of electoral fraud…that culminated in the violence in the United States on January 6, 2021.

These were its removal of two Trump posts on Jan. 6 that effectively egged on the insurrectionists attacking the U.S. Capitol that day and its blocking of Trump the following day “indefinitely and for at least the next two weeks.”

But the board punted back to Facebook executives the most important point of whether Trump should be permanently banned from the platform, a step that the social media platform Twitter has taken.

The board directed Facebook to “reexamine the arbitrary penalty it imposed on Jan. 7 and decide the appropriate penalty” within six months.

The board added, “It is not permissible for Facebook to keep a user off the platform for an undefined period, with no criteria for when or whether the account will be restored.”

The worst aspect of this decision may be that it leaves the question of Trump’s role and that of his posts on social media, open to be masticated endlessly — including on social media.

For at least the next six months, the possibility of Trump’s return to Facebook will be open. That’s a shame, because it has already become evident that his banning by Facebook and Twitter has effectively muted his loathsome influence on our politics.

What does it mean to call Facebook’s Jan. 7 decision “arbitrary,” by the way? Sensible observers would say that Trump crossed a bright line by inciting a riot.

This is a decision that is likely to satisfy no one. Not only did the board fail to take a firm stand on the most crucial issue raised by Trump’s behavior, but it also failed to justify its own existence.

The decision seems unlikely to quell concerns raised in public and by lawmakers about Facebook’s power, and willingness, to distribute poisonous content worldwide.

Indeed, critics were loading their weapons within minutes of the decision’s publication on Wednesday morning.

“We ask: what is the point of the Oversight Board?” the critics wrote. “This is a Facebook-funded, Facebook-appointed body that has no legitimacy to make real decisions. Facebook’s attempt to divert attention from its fundamental failure to take responsibility for what’s on its own platform has itself failed.”

The critics are right. From the Oversight Board’s inception, it faced doubts about whether it was truly independent of the company and its chairman, Mark Zuckerberg, and truly capable of taking a firm stand that might conflict with Facebook’s business model. Here, in its first major decision, it failed to put the doubts to rest.

Signs that the board might be hobbled by its own structure emerged early. In the first place, it’s too big — 20 members currently, with the expectation of an expansion to 40. Its size plays into the old saw about committees being the place where hard judgments go to be buried.

Facebook bragged about the board’s ethnic and geographical diversity. But many of its members are academics or former high-level government ministers and advocacy group officials. They all have creditable resumes, but it’s fair to ask whether as a group they’re accustomed to taking hard decisions on specific questions, rather than making policy.

Sure enough, when it came to assessing “whether reinstating Mr. Trump’s accounts would pose a serious risk of inciting imminent discrimination, violence or other lawless action,” the decision said:

“A minority believes that it is important to outline some minimum criteria that reflect the Board’s assessment of Facebook’s human rights responsibilities. The majority prefers instead to provide this guidance as a policy recommendation.”

What’s also exasperating is that the decision makes it impossible to assess the board’s procedures and performance.

That’s because it’s essentially anonymous. The decision was “prepared” by a panel of five members — unidentified — and ratified by a majority, also unidentified. The decision mentions that a minority dissented from various of its elements, but doesn’t identify the dissenters, or even make clear that the same minority dissented in every particular.

As a result, no one can determine how the various members applied their expertise to the Trump question.

How did the backgrounds of the journalists, the human rights advocates, the scholars and the law professors inform the decision? How did such considerations as Trump’s spreading of lies, assault on human rights and challenge to the democratic process rank in importance for the final result?

In most major decisions by the U.S. Supreme Court, which according to Facebook is the model for the Oversight Board, justices put their names to their majority opinions and to their dissents. That didn’t happen here.

(We do know that only 19 of the board’s 20 members participated in the decision — Suzanne Nossel, chief executive of the human rights group PEN America, joined the board only two weeks ago. Nossel was named to replace Pamela Karlan, a Stanford law professor who has joined the Biden administration.)

The decision also underscores the board’s fundamental unwillingness — or is it lack of authority? — to truly oversee Facebook’s policies and behavior.

That’s the core of the critique offered by the “Real Oversight Board.” In “an obvious case,” the critics noted, the board “took nearly four months to reach a partial ruling that does nothing to fundamentally challenge Facebook’s business model or approach to content.”

There are glimmers of useful thinking in the board’s decision, like Skittles in a bowl of pablum. The board took direct aim at the position of Facebook and other social media platforms that statements and posts by political leaders deserve more indulgence than those of ordinary citizens because of their inherent “newsworthiness.”

That’s wrong, the board wrote: “Considerations of newsworthiness should not take priority when urgent action is needed to prevent significant harm.” It added that “Facebook should undertake a comprehensive review of its potential contribution to the narrative of electoral fraud and the exacerbated tensions that culminated in the violence in the United States on January 6, 2021.”

The board also set down some minimum standards for restoring Trump’s access. Facebook should “be satisfied that Mr. Trump has ceased making unfounded claims about election fraud in the manner that justified suspension on January 6,” the board wrote.

But it also noted that the idea that “users who seek reinstatement after suspension recognize their wrongdoing and commit to observing the rules in the future” was a minority view, and therefore not part of its recommendations.

The minority felt that “before Mr. Trump’s account can be restored, Facebook must also aim to ensure the withdrawal of praise or support for those involved in the riots.” But that was rejected by the board in full.

Nossel wrote in a Los Angeles Times op-ed in January, before she was named to the board, that the board will “have to prove it can answer thorny questions that have divided politicians and the public. And most importantly, it needs to show that it is unafraid of overruling Zuckerberg himself if that’s where the facts and arguments lead.”

Has it delivered on the challenge? The answer is no. The board threw up its hands at the thorniest question and handed its decision-making authority, such as it was, back to Zuckerberg himself. We’re back where we started.