Column: GOP Rep. Greene equates mask mandates with the Holocaust. Here’s a history lesson for her

Column: GOP Rep. Greene equates mask mandates with the Holocaust. Here’s a history lesson for her 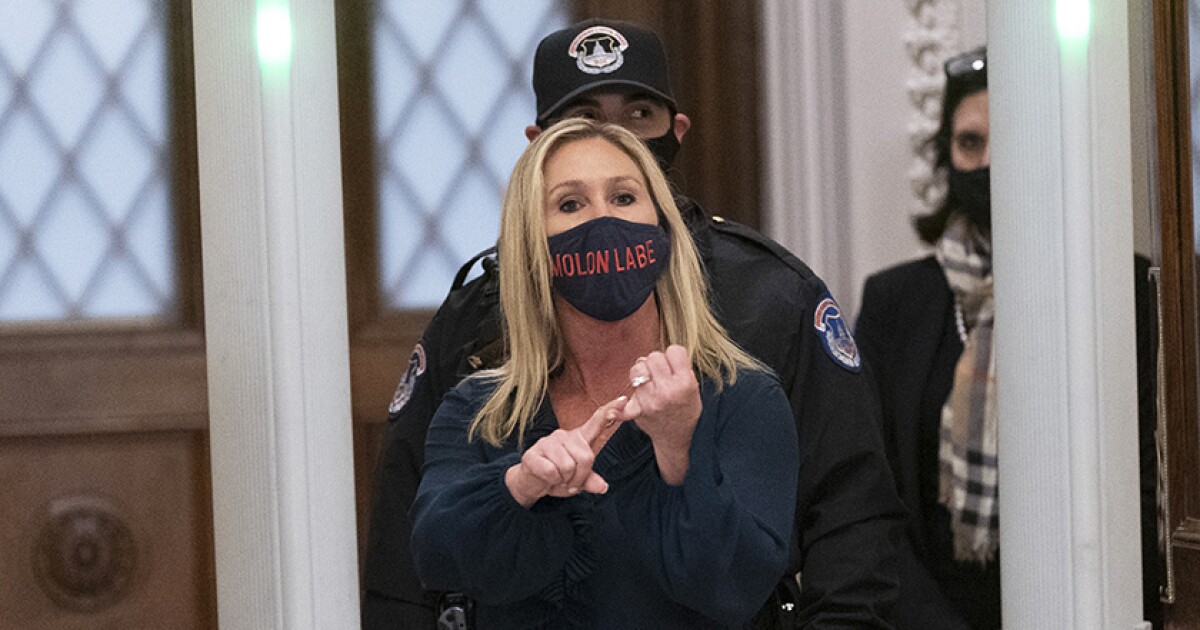 Rep. Marjorie Taylor Greene, the Georgia congresswoman who has made herself the face of Republican lunacy, was roundly flayed over the weekend for a TV appearance in which she equated a mask mandate on the House floor to the Holocaust.

The reproofs came from all along the political spectrum, Republicans and Democrats alike. But something was missing from most of the commentary.

That something is history.

The old, the weak, the infirm, the children and the others….would be immediately walked to the gas chambers and exterminated.

Andrew Roberts, “The Storm of War”

“You know, we can look back in a time in history where people were told to wear a gold star,” Greene said as Brody, a right-wing commentator, nodded in sage agreement. “And they were definitely treated like second-class citizens — so much so that they were put in trains and taken to gas chambers in Nazi Germany, and this is exactly the type of abuse that Nancy Pelosi is talking about.”

(Greene plainly was referring to the yellow stars that Jews in Nazi Germany were forced to wear.)

Greene is not alone in trying to depict social distancing imperatives as tantamount to Nazi policies.

A few weeks ago, speaking of the prospect of “vaccine passports” to verify that holders have been inoculated against COVID-19, Rep. Madison Cawthorn (R-N.C.), another House extremist, told Fox News, “Proposals like these smack of 1940s Nazi Germany.”

Referring to anti-pandemic measures as the equivalent of Holocaust measures has become a theme in some conservative corners.

Former U.S. Ambassador to Germany Richard Grenell issued a tweet showing a picture of a fictional Nazi officer from the film “Inglorious Basterds” accusing a family of hiding “unvaccinated people” under their floorboards. (Thanks to an appointment by ex-President Trump, Grenell is a member of the U.S. Holocaust Memorial Council.)

Make no mistake: Equating mask mandates and vaccine passports to Nazi policies is a form of Holocaust denial, that thoroughly discredited dark corner of the human psyche.

The nonchalance of Greene’s evocation of the Holocaust, along with that of others who have invoked it to fight pandemic measures, suggests that the Holocaust is receding from public awareness. It’s a 75-year-old story, after all — who can bother thinking about such ancient history?

Apparently it’s been forgotten by the House Republican leadership, none of whom have responded to Greene’s words with anything but silence — not Minority Leader Keven McCarthy (R-Bakersfield), nor Minority Whip Steve Scalise (R-La.), nor the theatrically grouchy Elise Stefanik (R-N.Y.), who was recently elevated to the chair of the House Republican Conference.

Yet remembrances are all around us, if we choose to look. Holocaust memorial museums have been established around the world, including in Los Angeles and Washington, D.C. (The latter is the institution Grenell serves as a trustee.) The genocide has been chronicled in firsthand accounts and expansive writings from historians. This is what it entailed.

Hitler developed the techniques of mass murder employed in the ghettos and death camps of Nazi-controlled Europe starting with a campaign against children with disabilities, of whom an estimated 5,000 were killed between 1939 and 1944. The program expanded to adults with mental illnesses, who were transported to six euthanasia centers, where carbon dioxide was pumped into camouflaged shower rooms. In these centers cyanide gas, the infamous Zyklon (German for “cyclone”) B, was first used.

As historian Jeremy M. Black documents, after the Nazi subjugation of Poland in 1939 the Germans chose to force Jews into ghettos, tiny urban quarters. The hope was that typhus, malnutrition and starvation would relieve the Nazis of the necessity of face-to-face murder. By August 1941, Black reports, 5,500 Jews were dying in the ghetto every month. Leaving the ghetto was punishable by death.

The first extermination camp, Sobibor, was opened in Poland in 1942. At that point, the Nazis’ genocide campaign against European Jewry moved into high gear. Up to that point, most murders had been committed by special police squads, whose members shot Jews point-blank.

The use of the cyanide gas Zyklon B in the industrialized settings of death camps “alleviated the process of murder,” wrote Laurence Rees in his 2005 history of Auschwitz-Birkenauz, which was built to house 130,000 prisoners at a time, and where 1.1 million were killed.

Jews were marshaled from their home towns by train or truck. During the journeys, which could take as long as two weeks, they were given no food or water. There were no lavatories.

At Birkenau, about 15% of each trainload were chosen by SS officers to join work squads. The others — “the old, the weak, the infirm, the children and the others … would be immediately walked to the gas chambers and exterminated.” Some 230,000 children died there, typically within an hour of their arrival.

The biographers of SS chief Heinrich Himmler, a principal architect of the Holocaust, tell the story of Oswald “Papa” Kaduk, an SS functionary at Auschwitz who had a practice of giving Jewish children balloons just before injecting the chemical phenol directly into their hearts. This killed them within seconds, enabling Kaduk to murder 10 children per minute.

Outside the gas chambers, while the gassings were taking place, SS squads rummaged through the victims’ possessions, taking food, valuables and clothing. They pried open the corpses’ mouths looking for gold coins or fillings, shaved hair off the corpses for German textile factories (seven tons of human hair were found in the camp warehouse when it was liberated), pried rings off their fingers, then sent the bodies to be cremated — in incinerators, the design of which was proudly patented by their inventor.

Rudolf Hoess, the Auschwitz commandant, went to his death (by hanging after his 1947 conviction for war crimes) expressing pride for the efficiency of the Auschwitz killing machinery.

“I have never heard of a single person being found alive when the gas chambers were opened half an hour after the gas had been inducted,” he wrote in his memoirs. As Primo Levi, one of the survivors of Auschwitz, recalled being told by a prisoner upon his arrival, “The only way out is through the Chimney.”

The compiler of the prisoner squads’ recollections records what they saw when they reopened the gas chambers to clear out the corpses: “The purple, fissured flesh; the faces distorted with pain; and the eyes, bulging and agape, attest to the terrible agonies that these people experienced in their last moments.”

This is the reality of the Holocaust — the murder of 6 million Jews and millions more who the Nazis judged unsuitable for their Aryan reich. This is the reality mocked by Robert Keith Packer, who ambled around the U.S. Capitol on Jan. 6 wearing a sweatshirt bearing the legend “Camp Auschwitz” and the phrase “Work Brings Freedom,” a translation of “Arbeit Macht Frei,” which stood over the gates of the death camp’s main entrance.

This is the reality that Greene and her fellows choose to exploit in attempting to turn the slight inconvenience of mask mandates into an elemental crime against humanity. They’ve made a choice that bespeaks surpassing cruelty and ignorance, and no condemnation can be severe enough.

Their efforts have the effect, at their core, of neutralizing the Holocaust. This is a moral offense. As the Holocaust scholar Lucy S. Dawidowicz observed in her 1975 work “The War Against the Jews 1933-1945,” that effort is, or should be, impossible. “The very subject matter of the Final Solution,” she wrote, “precludes neutrality.”