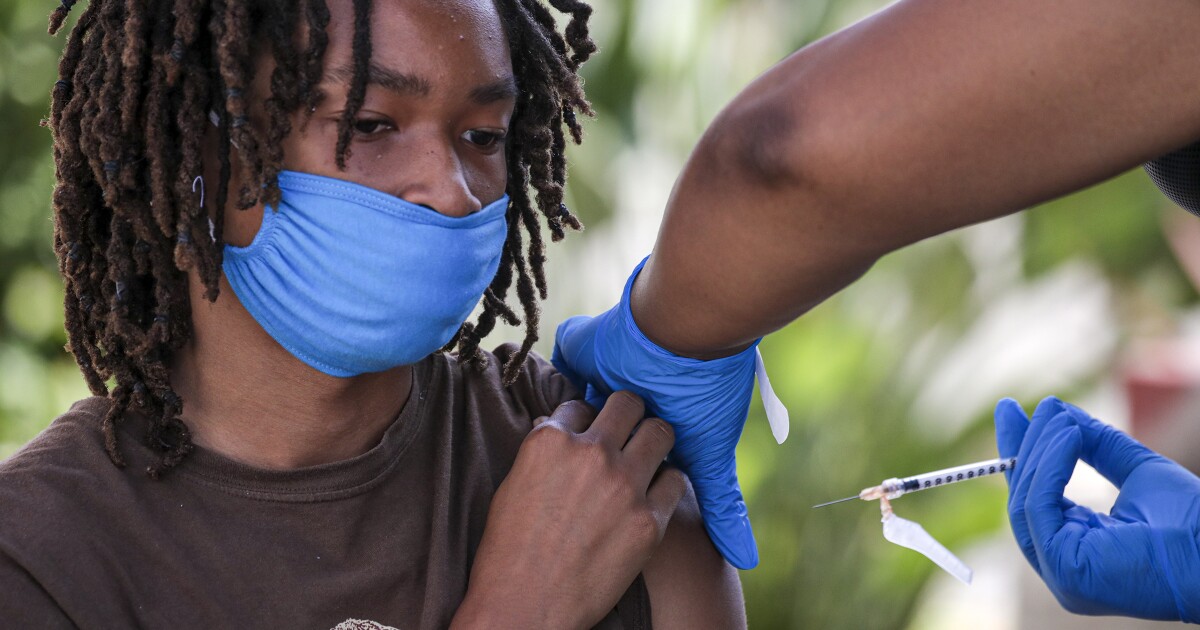 It’s undoubtedly a coincidence, but two commentators I find most thoughtful and trustworthy both weighed in Wednesday on the question of whether the Food and Drug Administration should just go ahead and grant full formal approval to the COVID vaccines being widely administered in the U.S.

Unfortunately, they land on opposite side of the question.

Any vaccine approval without completion of the high-quality review and evaluation that Americans expect the agency to perform would … affect public trust in the agency and do little to help combat vaccine hesitancy.

Drum advocates allowing the full approval process to play out, which means approval might not be granted until January or later. Campos argues that, given how much we already know about the safety and efficacy of the vaccines, the FDA should just go ahead and grant full authorization now.

I’m going to have to agree with Kevin on this one. It’s true that with a combined total of more than 300 million doses of the Pfizer-BioNTech and Moderna vaccines administered in the U.S. alone, the data on their safety and efficacy are copious indeed.

But it’s also true that the FDA has established a procedure for fully authorizing drugs that has served it well in the past. Tinkering with that procedure can only lead to a bad outcome.

First, some background. The FDA issued emergency use authorizations for the three COVID vaccines in use in the U.S. starting on Dec. 11, 2020, when it granted the EUA for the two-dose Pfizer vaccine. EUAs followed for the two-dose Moderna product on Dec. 18 and for a one-dose vaccine manufactured by Johnson & Johnson on Feb. 27 this year.

EUAs still require manufacturers to submit extensive clinical data on the safety and efficacy of their products, and the FDA anticipates that the applicants will continue clinical trials of the products until they compile enough evidence for full authorization — often involving as many as tens of thousands of trial subjects followed over a period of months or even years.

That process is going on now for all three vaccines. Pfizer applied on May 7 for expedited review of its vaccine, which would shorten the FDA process to six months or so from the usual 10 months or more; Moderna made a similar application on June 1. Johnson & Johnson hasn’t filed its application yet.

So the bottom line is that, following the normal procedure for granting full authorization for a drug, the FDA is continuing to collect data about the vaccines. The agency is facing a lot of pressure to move as fast as possible.

As recently as Wednesday evening, during a town hall aired on CNN, President Biden said that scientists in his circle expected that the FDA would issue final authorizations “sometime maybe in the beginning of the school year — at the end of August, beginning of September, October.”

Biden said the decision would rest in the FDA’s hands and implied it would be based on science. But, whether deliberately or not, his words implicitly gave the FDA a working deadline.

That’s one indication that pressure on the agency to move swiftly isn’t based on science, but on politics. The rise of the Delta variant of the virus, which is more transmissible than previous variants but hasn’t been conclusively shown to cause more severe disease, adds urgency to the vaccine drive, since all three vaccines are effective against the variant. (Some recent studies have suggested the Johnson & Johnson vaccine requires a second dose to be as effective as the two mRNA-based alternatives.)

The thinking underlying the push for prompt final authorization is that it will give policymakers, medical authorities and political leaders an additional tool to encourage vaccine holdouts to get their shots, including a stronger legal case for mandating vaccinations.

It’s also felt that final authorization might also quell concerns among vaccine resisters or refusers that as long as the vaccines are administered only under EUAs, they’re “experimental” and therefore their safety and efficacy haven’t been adequately vetted.

To begin with, there isn’t much doubt that the legal case for mandating vaccines under EUAs is solid. Federal Judge Lynn N. Hughes of Houston made short work of the claim that people can’t be forced to take the vaccines on June 12, when he tossed a lawsuit brought by 117 employees of Houston Methodist Medical Center who had been threatened with termination for refusing to vaccinate.

The employees asserted that the vaccines are “experimental and dangerous.” Hughes found that the claim is “false, and it is also irrelevant.” The lead plaintiff said she was being forced to become a “human guinea pig”; the judge scoffed, noting that “the hospital’s employees are not participants in a human trial,” but were voluntarily refusing to accept inoculation that the woman’s employer judged “will make it safer for their workers and the patients in Methodist’s care.”

Finally, the judge addressed the plaintiffs’ claim likening the threat of termination to forced medical experimentation during the Holocaust. “Equating the injection requirement to medical experimentation in concentration camps,” he said, “is reprehensible.” Lead plaintiff Jennifer Bridges, he said, “can freely choose to accept or reject a COVID-19 vaccine; however, if she refuses, she will simply need to work somewhere else.”

Hughes also noted that the federal Equal Employment Opportunities Commission had ruled in May that employers can require employees to be vaccinated, as long as they make accommodations for workers with disabilities, genuine medical excuses or sincerely held religious beliefs against vaccination.

The distinction between treatments under EUAs and those with final authorization hasn’t factored into many of the governmental actions aimed at the COVID vaccines.

The idiotic decision by Tennessee state health officials and GOP Gov. Bill Lee to end vaccination outreach to school-age children, for example, covers not only the COVID vaccines, which were the main targets of the policy, but, according to the Nashville Tennesseean also flu, measles, mumps, rubella, human papillomavirus, or HPV, and others, all of which have been fully FDA-authorized for years. That decision is wholly political.

Whether final authorization alone will move the needle on vaccine resistance is debatable. In fact, it’s dubious. The holdouts cite many reasons for resisting vaccination.

In a poll conducted in March, the healthcare consultancy Surgo Ventures found that of the 38% of respondents who were vaccine holdouts, nearly half — 16% of the total — were “COVID skeptics” who don’t believe in vaccines in general or have deeply held beliefs around COVID-19. “[E]very person in this group believes in at least one conspiracy theory,” Surgo found.

The chance that these people will be swayed by the upgrading of the vaccines from EUA to final authorization is plainly small.

Among the other categories of resisters, Surgo found, 6% of respondents were watching to see how friends or family members fared with the vaccine, 9% were anxious about the cost (even though it’s free), and 7% were “system distrusters,” chiefly people of color who believe the medical establishment hasn’t served them well. They’re more likely than the “skeptics” to ultimately take the shots.

Put it all together and it’s evident that there’s more risk to the vaccine rollout from truncating the process and promptly issuing a full authorization.

That includes risk to the FDA’s own reputation. In a recent op-ed, Eric J. Topol of the Scripps Research institute in La Jolla — generally a sage and sober commentator on FDA policies — pointed to the “paradox” that the FDA has just approved an Alzheimer’s drug despite limited evidence that it works at all, while “coronavirus vaccines are not yet fully licensed despite massive evidence of their benefits.”

Yet that’s not a paradox so much as validation of the need to wait until more data come in. The FDA’s hasty and scientifically unsupportable approval of the Alzheimer’s drug Aduheim has roiled the agency, provoking three members of the scientific panel that oversaw the drug’s scrutiny to resign and leading the agency’s interim commissioner to seek an independent investigation of the approval. That’s a hint of what could happen if it approves the COVID vaccines prematurely.

FDA official Peter Marks pushed back against Topol with a response arguing that “any vaccine approval without completion of the high-quality review and evaluation that Americans expect the agency to perform would undermine the FDA’s statutory responsibilities, affect public trust in the agency and do little to help combat vaccine hesitancy.”

As Drum points out, a vaccine approval that involves truncating a formal procedure would lead skeptics to “rightfully assume that this means the approval is political, not based on science. It would pretty much destroy the FDA’s credibility.”

He’s right. Following four years of its relentless manipulation by Donald Trump and his henchmen, the FDA has precious little credibility to squander.

The best thing the agency can do to ensure that the public sees that the vaccines are safe and effective is to put them through the same approval process that has made the U.S. drug market one of the safest in the world. Little can be gained by changing the rules, and far too much can be lost.