Column: Here’s why the GOP smears everything it doesn’t like as ‘socialism’

Homepage News Column: Here's why the GOP smears everything it doesn't like as 'socialism'
News

Column: Here’s why the GOP smears everything it doesn’t like as ‘socialism’ 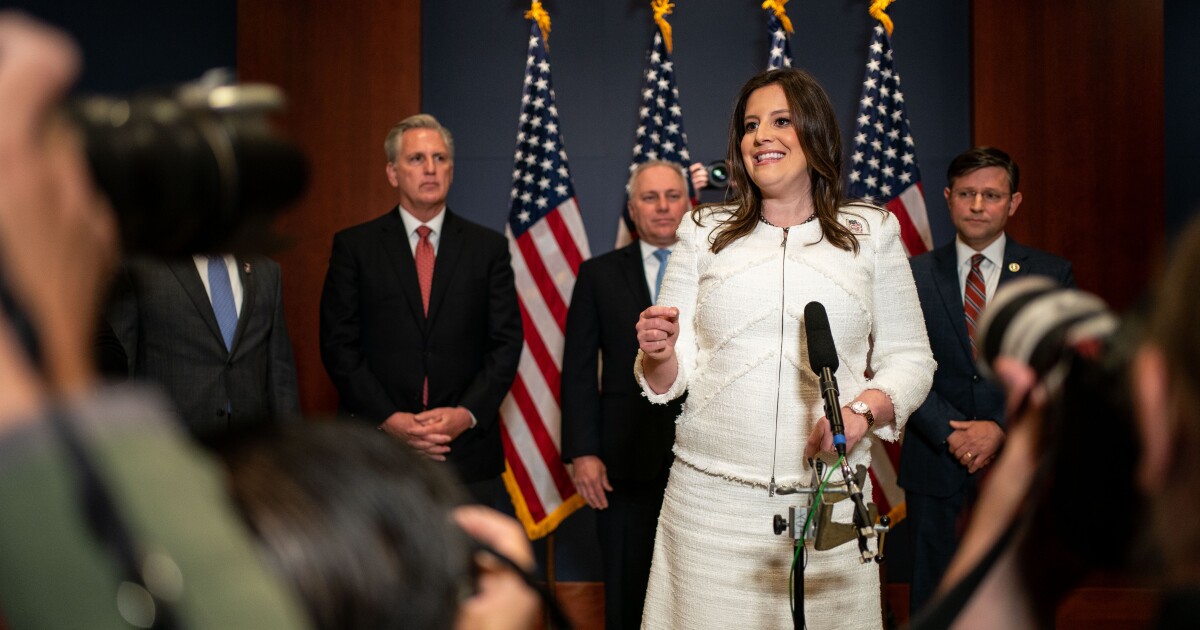 So here comes Rep. Elise Stefanik (R-N.Y.), the third-ranking member of the House Republican leadership, with an especially absurd example of the genre.

Marking the birthdays of Medicare and Medicaid, which were enacted on July 30, 1965, she took to Twitter to celebrate “the critical role these programs have played to protect the healthcare of millions of families.” Then she pivoted to add, “To safeguard our future, we must reject Socialist healthcare schemes.”

The cry of socialism has been patented by the powerful interests that desire to put a damper on progressive legislation….for over a quarter century.

Stefanik’s remark was particularly incoherent in part because of the history of Republican opinion on Medicare and Medicaid: Almost universally, they derided the programs as “socialism.”

The Medicare and Medicaid bill placed before Congress by President Lyndon Johnson was “not only socialism — it is brazen socialism,” declared Sen. Carl Curtis (R-Neb.).

During his 1964 presidential campaign against Johnson, Sen. Barry Goldwater (R-Ariz.) asked: “Having given our pensioners their medical care in kind, why not food baskets, why not public housing accommodations, why not vacation resorts, why not a ration of cigarettes for those who smoke and of beer for those who drink?”

Ronald Reagan, functioning in 1961 as a mouthpiece for the American Medical Assn., reviled a precursor bill to the Medicaid/Medicare legislation as “simply an excuse to bring about what [Democrats] wanted all the time, socialized medicine.”

Reagan’s AMA patrons were only sticking to a successful script — their cry of “socialized medicine” had helped them defeat an effort by Harry Truman to enact a public healthcare plan in 1945. (The AMA also derided Truman and his aides as “followers of the Moscow party line.”)

More recently, Senate Minority Leader Mitch McConnell (R-Ky.) announced that the GOP strategy in the 2020 election would be to present itself as “the firewall that saves the country from socialism.”

Did it work? This was the election that turned McConnell from Senate majority leader to Senate minority leader.

Stefanik, who has been making a name for herself on Capitol Hill as someone who will say anything if she thinks it will bring her advancement, wasn’t clear in her tweet what she meant by “Socialist healthcare schemes.”

Perhaps she meant the public option, a government-sponsored program to compete with private insurance. The public option was rejected during the debate preceding enactment of the Affordable Care Act in 2010, though it has lately gained new attention. But Stefanik didn’t need to be that specific; her goal was to place the term “socialism” out there.

Stefanik was using the term as a shibboleth — a code word directed at her political base, much as her GOP colleagues have used “vaccine passport” to demonize vaccination requirements designed to protect public health, or “Faucism” to undermine vaccination, or “critical race theory” to manipulate education standards.

Stefanik didn’t expect to be heard by the public at large, and certainly not by Democrats. She was merely sending a signal to her peeps that she was one of them.

The effectiveness of shibboleths doesn’t depend on an understanding of a particular term’s meaning — in fact, any such understanding would work against its effectiveness as a partisan dog whistle. It’s useful to recall that one of the rallying cries against the enactment of the ACA was “keep your government hands off my Medicare.”

Nevertheless, before looking at the technique’s long, discreditable history, we should be reminded that true socialism is defined as a belief that the means of production should be publicly, not privately, owned. That encompasses manufacturing plants and their machines and tools. Such conditions imply an economy in which output and the use of labor are publicly directed and social benefits evenly distributed.

Any functioning economy, then, comprises purely capitalist elements as well as those that might be labeled socialist. But the programs denigrated as socialist by the American right tend to place private enterprise at their center.

That includes the ACA, which dictates that all Americans must carry a form of health insurance and subsidizes their purchase by the working and middle class, but relies on private insurers to provide the coverage. In Medicaid and Medicare, the government sets the prices for procedures and services, but leaves it up to doctors and hospitals to decide whether to join.

The American system also recognizes that market capitalism, for all its virtues, has its flaws — chiefly that all participants don’t enter the marketplace with equivalent power. That’s why we have a safety net of social insurance programs aimed at ensuring that nobody is left entirely out of the market — the Affordable Care Act, Medicaid and Medicare, food stamps and child tax credits, free COVID-19 testing and vaccinations, to name a few.

As I’ve reported before, the branding of progressive programs, especially those proposed by Democrats, as “socialist” is not a new stratagem. The “socialism” smear has long since become so common that it’s easy — almost too easy — to ridicule.

The best example dates back to January 1936 and a gala dinner sponsored by the American Liberty League, a splinter group of wealthy business leaders and old-guard Democrats opposing Franklin D. Roosevelt’s New Deal. Its star was former New York Gov. Al Smith, who had run for president on the Democratic ticket in 1928 as a progressive leader and then thrown in his lot with the party’s Wall Street wing.

No one was ever quite sure what motivated Smith’s apostasy, whether personal resentment of his former ally FDR or the financial blandishments of his new friends. FDR had a withering opinion of the Liberty League, describing it as “an organization that only advocates two or three out of the Ten Commandments…. [They] say you shall love God and then forget your neighbor.”

A thunderstruck FDR remarked to his Labor Secretary, Frances Perkins: “Practically all the things we’ve done in the federal government are like things Al Smith did as governor of New York. They’re things he would have done if he had been president of the United States. What in the world is the matter?”

But he also had an ace up his sleeve — a speech Smith had delivered during the 1928 campaign in which he ridiculed the same charge of “socialism” from Republicans that he now leveled against Roosevelt.

“The cry of socialism,” Smith declared, “has been patented by the powerful interests that desire to put a damper on progressive legislation. Is that cry of socialism anything new? Not to a man of my experience. I have heard it raised by reactionary elements and the Republican Party … for over a quarter-century.”

Nearly a century later, the GOP is still at it. The cry of “socialism” is still used to put a damper on progressive legislation, whether it’s requiring the wealthy to pay their fair share of taxes instead of enjoying the lowest tax rates in 50 years, or looking for further means to ensure universal healthcare. It’s been a tried-and-true method for decades, but as Stefanik’s inept version shows, it’s getting a little threadbare.