Column: Instead of vaccine mandates, companies turn to ‘wellness’ programs. That’s a problem

Column: Instead of vaccine mandates, companies turn to ‘wellness’ programs. That’s a problem 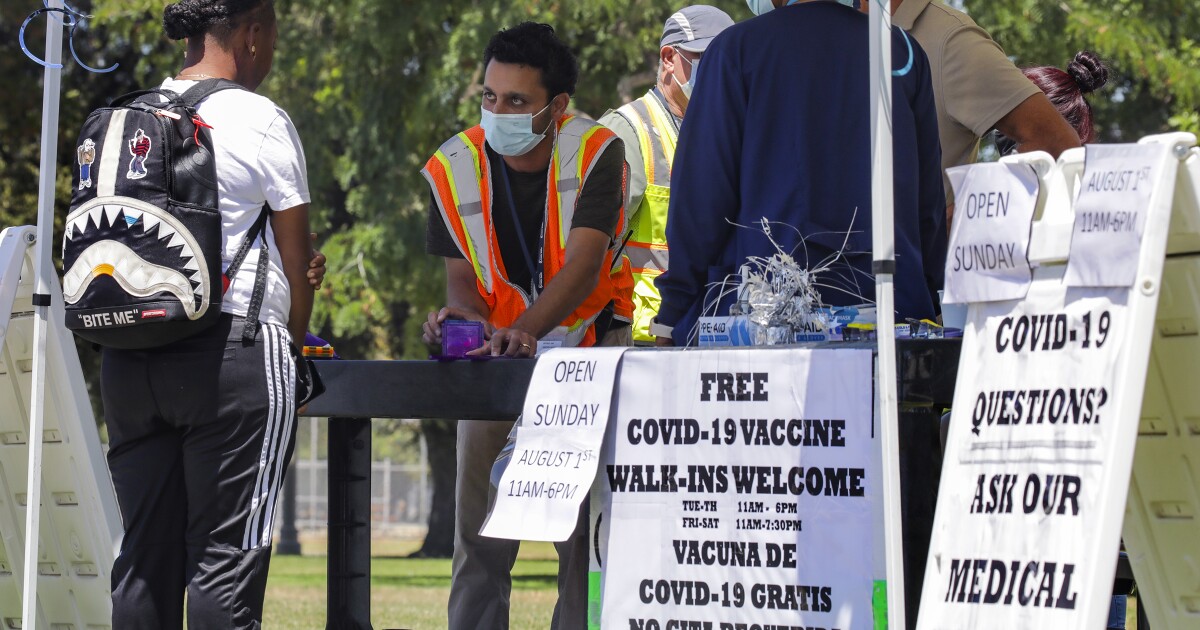 As we’ve been reporting, one key to improving COVID-19 vaccination rates in the U.S. is held by employers, who can and should mandate the shots for all employees (other than those with legitimate medical reasons for refusing).

Mandates are simple, straightforward and effective: No shot, no job. There’s virtually no question that they’re legal, having been waved through in federal court.

That’s especially true now that one of the vaccines, distributed by Pfizer, has been granted final approval by the Food and Drug Administration, with the same certification in the offing for the others commonly in use in the U.S., made by Moderna and Johnson & Johnson.

Primary care doctors, pediatricians, family doctors may be our best hopes. Why would we cut off access to those health professionals who are so critical to the vaccination campaign?

Following the Pfizer approval, President Biden urged business leaders to follow through with vaccination mandates: “If you’re a business leader, a nonprofit leader, a state or local leader who has been waiting for full FDA approval to require vaccinations, I call on you now to do that,” he said Aug. 23.

Yet many employers are still shy about imposing vaccine requirements on their employees. And the alternative could be much worse for workers than a vaccination mandate.

The alternative we’re talking about exploits a legal loophole granted to employer “wellness” programs. Under federal law, these can be a vehicle for allowing discrimination in health plan fees. They can also provide a means for employers to invade their workers’ privacy.

Delta Air Lines pioneered this approach when it announced a quasi-vaccination mandate for its employees last week.

Instead of flatly requiring all workers to get vaccinated against COVID-19, the airline provided them with an escape clause: Those who refuse the shots without a legitimate excuse will be paying an extra $200 a month in health premiums.

For the most part, federal law forbids large group plans such as those offered by big employers to use individuals’ health issues as grounds for differential premiums. The only permitted exception is for smokers, though most employers don’t bother to impose any surcharge in those cases.

That’s where the wellness loophole comes in. The federal Health Insurance Portability and Accountability Act of 1996, known as HIPAA, carved out a wellness exception. The most often cited provision of HIPAA protects the privacy of people’s medical records from disclosure by healthcare entities, but the wellness carve-out is also important.

The exception allowed premium discounts of up to 20% for employees enrolled in those programs, as long as they’re “voluntary” — put another way, a penalty of 20% for those who don’t sign up. The Affordable Care Act of 2010 raised the permissible variance to 30%. Anything over that limit could be judge coercive and thus disallowed.

That’s the exception that theoretically allows Delta to charge its unvaccinated workers more. Whether the airline is compliant with the HIPAA and ACA rules can’t be determined, because Delta isn’t saying what it normally charges for health coverage.

The average employer premium for single coverage was $7,470 last year, according to a survey by the Kaiser Family Foundation. If that’s the cost of a Delta plan, its $200 monthly surcharge would come to 32%, just beyond the permissible limit. (The company says its change meets all applicable legal requirements.)

There are legitimate grounds for concern that allowing distinctions between vaccinated and unvaccinated workers places the country at the top of a slippery slope, as my colleague David Lazarus observes. What would keep employers from trying to discriminate against workers they judge to be overweight, or who suffer from diabetes or heart disease, or choose to engage in dangerous hobbies such as rock climbing or skydiving?

“Getting rid of the widespread practice of discriminating against people based on health issues, whether it was HIPAA in the 1990s or the Affordable Care Act in 2010, was a very long and hard-fought effort,” says Sabrina Corlette, co-director of the Center on Health Insurance Reforms at Georgetown University.

“I get the anger at the people who are choosing to remain unvaccinated,” Corlette says, “but I do worry more broadly about this general impulse to look at someone’s behavior or health status and say we should charge them more or deny them insurance.”

Big employers can feel a strong urge to discriminate because they’re typically self-insured — that is, they bear most of the financial risk of employee healthcare bills and employ insurance companies chiefly to administer their health plans.

Indeed, in announcing Delta’s plan, CEO Edward Bastian cited “the financial risk the decision to not vaccinate is creating for our company”: Hospital stays for COVID-19-infected employees were costing the airline an average of $50,000 per patient, he said.

The potential costs have been prompting more employers to institute or contemplate vaccination mandates, according to a survey released earlier this month by the healthcare consultancy Mercer.

Of the 372 employers responding to Mercer’s poll, “14% require (or plan to require) all employees returning to their worksites to be vaccinated, with another 15% requiring vaccinations for certain job functions such as business travel or customer contact.”

That’s a significant increase over the results from a poll of 425 employers three months earlier, in which only 3% planned to require vaccination and only 8% even considered doing so.

Healthcare cost increases are also what made “wellness” programs so alluring for corporate managements. The programs’ promoters have filled executives’ ears with the promise that encouraging employees to lose weight, exercise more and stop smoking will yield measurable reductions in medical costs.

As many as half of all major employers offer wellness programs, with incentives ranging from logo-imprinted water bottles to gym memberships to health insurance discounts.

In practice, however, these programs have been shown to be largely useless in producing healthcare savings, better health or improved work performance.

The only studies finding benefits in wellness programs, including one at Pepsico covering 2003-11, attributed the savings not to the healthy-lifestyle components, but to disease management: At Pepsico, employees got up-close-and-personal disease management if they had one of 10 chronic conditions, including asthma, diabetes, chronic obstructive pulmonary disease, hypertension or lower back pain.

That’s a well-understood method of controlling healthcare costs, but it doesn’t need to be part of a wellness program and it isn’t limited by government regulations.

The only reason employers might resort to the wellness carve-out is that they’re too nervous to go all-out with a vaccination mandate. In some cases their reluctance may be understandable: Changing workplace rules might require them to negotiate with their unions, or might provoke pushback from local or state politicians pursuing a retrograde partisan healthcare agenda. (This might have stayed the hand of Delta, which is headquartered in Georgia, a state with a governor who has taken a stand against COVID-related regulations.)

The drawbacks of going only part of the way toward full vaccination mandates and substituting punishment through health premiums are only increasing.

“To the extent that results in people losing healthcare coverage because they can’t afford it any more, that cuts off access to the very messengers that might be needed to convince someone to get the vaccine,” Corlette told me. “Primary care doctors, pediatricians, family doctors may be our best hopes. Why would we cut off access to those health professionals who are so critical to the vaccination campaign?”