Column: Lisa Rinna posted paparazzi photos of herself. Then she got sued for copyright infringement

Homepage News Column: Lisa Rinna posted paparazzi photos of herself. Then she got sued for copyright infringement
News

Column: Lisa Rinna posted paparazzi photos of herself. Then she got sued for copyright infringement 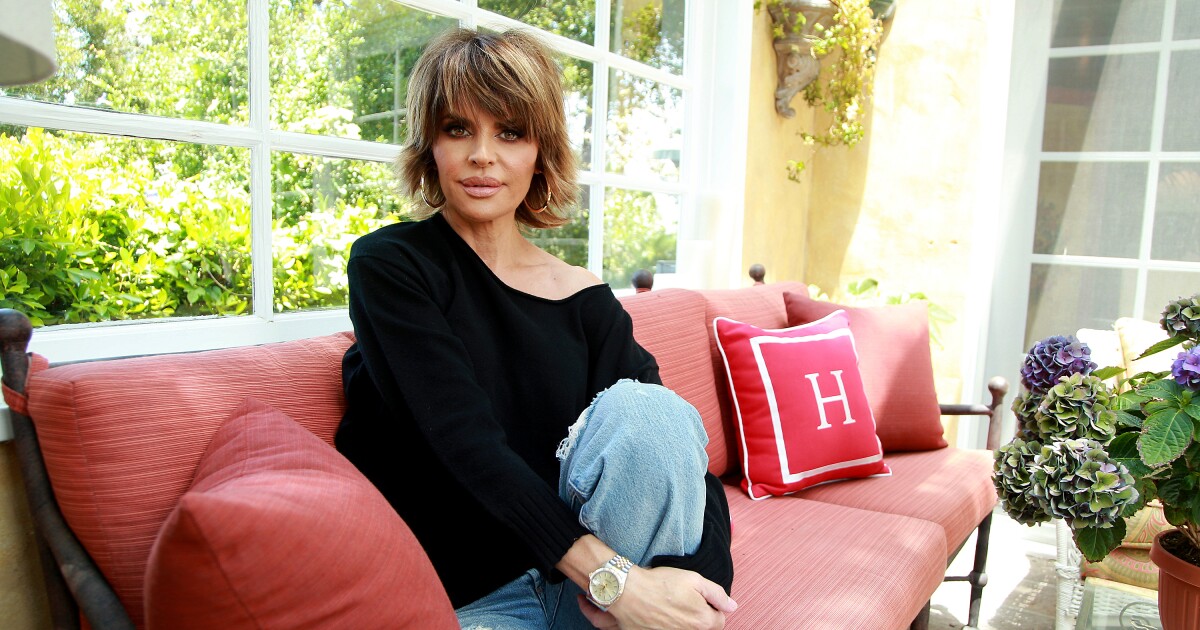 Actress Lisa Rinna always thought she got along fine with the paparazzi who followed her and her family, hoping to catch them in the unguarded moments that fan magazines crave.

“I’ve always seen it as a very symbiotic relationship,” the soap opera and reality TV actress says. “It was part of the game, if you’re going to be in this business. I’ve been nice, I’ve never fought with them, I’ve never run from them. My kids grew up with them jumping out of the bushes in Malibu. We’ve had a very good relationship with the press and the paparazzi. That’s why this is so shocking to me.”

At some level, this is the price tag of social media and paparazzi converging. In a sense, it’s the cost of doing business if you’re a celebrity and you’re living off promotion of your own image.

She’s referring to a federal lawsuit that was filed against her in June by Backgrid, an agency that represents paparazzi. Backgrid asserts that Rinna infringed its copyrights by posting eight photos of herself and her two adult daughters on her own Instagram page.

The agency launched its legal campaign with a letter claiming $1.2 million in damages from the postings by Rinna, who has attracted millions of social media followers for her roles in the soap opera “Days of Our Lives” and the TV drama “Melrose Place” as well as a member of the cast of the reality series “The Real Housewives of Beverly Hills.” After Rinna refused to pay, Backgrid filed its lawsuit.

Unlike most celebrities who have faced similar demands, Rinna is fighting back. She has asked a judge to reject Backgrid’s claims on the grounds that the photo agency has “effectively ‘weaponized’ the Copyright Act” merely in order to augment revenue it has lost during the pandemic.

In her legal filing, Rinna points out that although Backgrid has filed nearly 50 copyright infringement cases since 2017, some two-thirds of the lawsuits were filed in 2020 and 2021.

Her argument is that the pandemic has cost Backgrid and its photographers fees because celebrities have been staying home instead of dining out at restaurants or strolling along retail strips, the venues where they’ve been most commonly caught by paparazzi. And when they are photographed, masks have made them unrecognizable.

Litigation records indicate that most such cases end with an out-of-court settlement. Hundreds of these celebrity copyright infringement claims, indeed, may never land in court at all — they start and end with a letter from a photography agency’s lawyers identifying the infringing post and asking for a nominal fee, typically less than it would cost the target to muster a legal defense. The celebrity may dicker over the price, but ultimately reach an agreement.

These cases are a modern manifestation of our celebrity culture.

Entertainment personalities plainly benefit from staying in the public eye by having their images published widely. Paparazzi benefit by selling the photographs to news agencies, fan magazines, social media platforms, advertisers — almost anyone willing to pay their price. But the celebrities often want to control access to their images, especially those that capture them in candid settings, unguarded, unkempt or without makeup.

The bigger the names and the wider their social media following, the more vulnerable they may be to copyright infringement claims.

One reason is that the bigger the celebrity, the more damage he or she may do to the marketability of a copyrighted photograph by simply posting it online.

“It’s a problem when celebrities post photos on social media when they do not have permission,” says Jo Ardalan, a partner at One LLP, the intellectual property law firm that has represented Backgrid in several copyright cases, including the lawsuit against Rinna.

Many celebrities have millions of fans following their accounts. “Once a photograph is posted, People magazine or Us Weekly will be less likely to buy it, because all their fans will have already seen it,” Ardalan says.

Celebrities with social media followings typically don’t post photos of themselves simply for the entertainment of their close friends and family members. “Celebrities use their social media accounts to promote themselves as a brand,” Ardalan says. “They also frequently get paid for endorsing products on social media. That is a very commercial use.”

In recent years, defendants have included Justin Bieber (for a shot of him sharing a friendly moment with Los Angeles youth pastor Chad Veach, standing in front of some overfilled dumpsters); Katy Perry (for posting a photograph of her unrecognizably made up as Hillary Clinton for a Halloween event); and the Kardashian sisters.

Kim Kardashian went so far as to hire her own photographer to take paparazzi-like shots of her so she could slake fans’ thirst for them on social media without running afoul of copyright law.

Photographers have become steadily more forceful in fighting copyright violations. It may be a rare publication that hasn’t encountered a copyright claim over a published image — The Times among them.

The trend may reflect the sheer proliferation of potential destinations of any photograph or other creative work, including social media platforms whose users may simply have no knowledge that by sharing images they’ve found on the internet they’re violating someone’s creative rights.

It may seem absurd that celebrities can’t use photographs of themselves, especially those taken in public without their consent, without paying a fee, but them’s the breaks. The truth is that the photographers have the law on their side.

Copyright law generally protects writing or images produced through some creative effort. To the casual viewer, paparazzi photos may not look all that creative, but that’s not how courts have seen it.

“There’s somewhat of a presumption that there’s enough creativity in taking these photographs that they’re protectable by copyright,” says Neel Chatterjee, a Silicon Valley attorney who specializes in intellectual property cases.

The law requires only that the photographs’ owner — either the photographers or the agencies that hold their rights, register their ownership with the U.S. Copyright Office. The law provides for damages of $750 to $30,000 for each work infringed, and up to $150,000 if the infringement is deemed to be “willful.”

That may be the grounds for Backgrid’s assertion that Rinna faced as much as $1.2 million in legal damages — that would be the sum due for the eight photos she was accused of posting without permission, times a maximum damage award of $150,000 each.

Claimants have been careful to secure the required registrations — at least since 2019, when model Gigi Hadid beat an agency’s lawsuit by showing that the agency hadn’t actually been granted the copyright to the photo it sued over.

That may not be the only example of a photo agency overreaching. In 2016, after the distinguished photographer Carol Highsmith donated her work to the Library of Congress for royalty-free access by the public, she received a demand letter from a firm associated with the photo licensing service Getty Images.

Getty demanded $120, claiming it owned the license to one of her photos, which she had posted to the website of her own nonprofit organization.

Highsmith responded by suing the agency for $1 billion, asserting that it illicitly claimed rights it didn’t have to 18,755 of her works. The case was ultimately settled out of court on undisclosed terms.

Rinna told me that she would probably not have objected if Backgrid sought a nominal fee for her Instagram postings. But the magnitude of its demand raised the stakes.

“I understand paying a little bit,” she says. “But to pay this much, it’s very hard for me to say that’s OK. There’s something that’s not right about this. Those photos are worth much less — I mean, it’s my kids with masks on.”

At this stage, there seems to be little that celebrities can do to fight the paparazzi and their agencies, other than trying to persuade a judge that the agencies, in the words of Rinna’s legal filing, have come to court with “unclean hands” by abusing copyright law.

Rinna also has argued that she had a “fair use” right to post the photos, referring to an exception in copyright law that allows limited use of copyrighted material for purposes such as news reporting, criticism and research.

Whether that’s a promising legal strategy is up in the air: The same right was claimed by Hadid, but not weighed by the court because it found more compelling grounds to find in Hadid’s favor.

Fair use has also been claimed by model Emily Ratajkowski to fight a photographer’s infringement lawsuit, but the federal judge hearing that case has left the issue for a jury to decide.

Rinna also argues that the infringement lawsuits might also be discouraged by a statutory change reducing the potential damages when individuals post their or their family’s images. But that would require congressional action.

But lawmakers may find it tough to give celebrities whose careers involve getting themselves photographed a greater right to control just how and when they are photographed. The best practical option, indeed, may be to pay the photographers’ nuisance fees.

“At some level, this is the price tag of social media and paparazzi converging,” Chatterjee says. “In a sense, it’s the cost of doing business if you’re a celebrity and you’re living off promotion of your own image.”