Column: McConnell complains about national debt, but blames it on assistance for ordinary Americans

Column: McConnell complains about national debt, but blames it on assistance for ordinary Americans 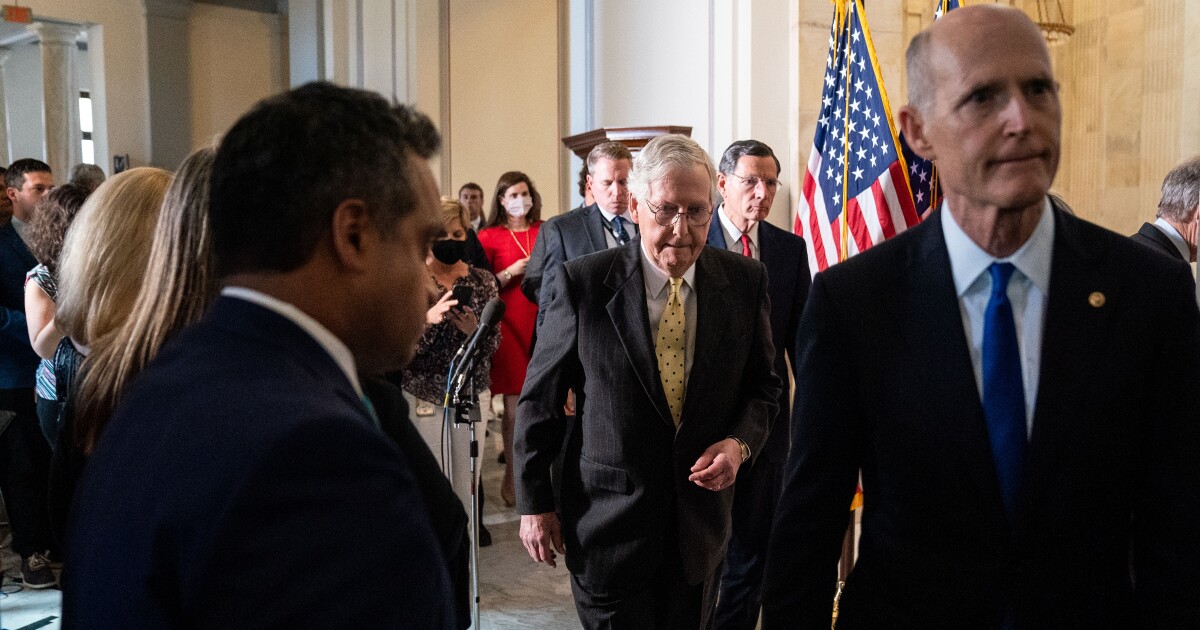 Senate Minority Leader Mitch McConnell (R-Ky.) isn’t alone among politicians in his fondness for the term “Russian roulette,” though he deserves credit for using it consistently: always in opposition to raising taxes on the rich.

Back in 2012, for instance, McConnell accused the Obama administration of “playing Russian roulette with the economy” by allowing Bush-era tax cuts to expire for households earning more than $250,000.

He has returned to the theme over the last few weeks. “I don’t know how many times I need to repeat this: We are playing Russian roulette with the American economy,” he said during a Kentucky appearance Monday.

Entitlements are the long-term drivers of the debt.

McConnell’s remark was specifically aimed at a Biden administration proposal for free community college tuition, but his larger target was Biden’s plan to pay for infrastructure and other spending by raising the top income and capital gains rates on the wealthy.

What’s happening here is a resumption of an old partisan economic debate. It’s the recurrent debate over raising the federal debt ceiling. The debate was deferred for two years in 2019 with a bipartisan deal that expires July 31 — that is, about a month from now.

That’s the context of the Washington brawling over Biden’s infrastructure and spending plans.

The GOP pushback has some familiar features: They say spending is too high, though they pinpoint spending that ordinary Americans are sure to appreciate. The national debt is also too high. And the only remedy is to cut spending, not to increase revenues.

Here’s how McConnell put it in a statement May 28: “President Biden’s proposal would drown American families in debt, deficits, and inflation…. Democrats want to borrow and spend on a scale that America has not seen since we had to fight and win World War II. Our debt burden would break all records, eclipsing even the 1940s.”

McConnell disdained the projects on Biden’s wish list as “a million mediocre socialist daydreams, from electric car subsidies to work-discouraging welfare programs to Washington-directed childcare plans.” (Here’s betting that not a few hundred thousand middle- and working-class households would welcome government assistance for child care so they could earn more money at work.)

He reserved particular sneers for physical infrastructure. “Generational new public works?” he stated. “No, there’s no 21st-century equivalent of the Hoover Dam or the Interstate Highway System to make Americans proud.” (Here’s betting that Americans would be prouder of existing physical infrastructure if it didn’t involve bridges and overpasses collapsing in front of motorists’ eyes.)

The underlying theme of this sort of commentary is no secret. While McConnell and his GOP colleagues wring their hands over the national debt, they carefully gloss over the fact that their own policies bear major responsibility for it.

During the Trump years, the national debt rose by about $6.8 trillion, or more than 48%. (The figures are for debt held by the public, leaving out intragovernmental borrowing.)

Some of that debt reflects spending on pandemic relief and response, but a sizable portion is the result of the 2017 tax cuts, the vast bulk of which went to corporations and the wealthy. According to a 2018 analysis by the Congressional Budget Office, the tax cuts will increase the federal deficit by about $1.9 trillion over the 10 years ending in 2027.

Amazingly, as we’ve reported in the past, McConnell consistently pushes the notion that the cause of the federal budget deficit isn’t the trashing of government revenue that resulted from the tax cuts, but spending on Social Security, Medicare and Medicaid — programs that are obviously essential for middle- and working-class Americans.

“Entitlements are the long-term drivers of the debt,” McConnell told Reuters in October 2018, nearly a year after enacting the tax cuts.

Implicit in McConnell’s warnings about Biden’s spending proposals is the idea that the federal debt is approaching a crisis point. “Our national debt is now larger than the size of our entire economy for the first time since World War II,” he said in February.

There’s no evidence for such crisis-mongering, however. If the debt level were truly cause for concern, that would be reflected in the credit markets. But “high yield and investment grade market players have not, so far, exhibited any fear of the national debt,” Jack Hersch of S&P Global Market Intelligence wrote at the time of McConnell’s warning. Nor has the magnitude of the federal debt triggered inflation.

One reason may be that debt is cheaper to carry now than at any time in memory. As Hersch reported, from 2010 to 2020 the U.S. national public debt more than doubled — from $9 trillion to $21 trillion. Yet the interest cost on that debt grew only 26%, thanks to “historically low interest rates.”

Relative to gross domestic product, Hersch observed, “the cost of the national debt today is half its cost 10 years ago, and no worse than nearly half a century ago.”

The Republican obsession with cutting taxes and paying for that policy by cutting social spending will play out over the next few weeks in the debate over Biden’s proposals. Already the GOP has drawn a line in the sand, and made plain that Biden’s tax proposals cross it.

Those proposals include a major increase in the federal capital gains tax, effectively eliminating the preferential tax rate enjoyed by capital gains and thereby making the tax rate on those gains equivalent to what’s charged on ordinary wage income. Biden has also proposed eliminating the “step up” in capital assets’ gains at death.

That’s a common loophole used by wealthy households to permanently extinguish the capital gains tax. Under current federal law, a capital gain is only taxable when the asset is sold, with the tax levied on the difference between the purchase price of the asset — its “cost basis,” and its sale price.

If the asset is held through the owner’s death, however, the cost basis is updated to the asset’s value at the time of death, and the owner’s heirs are liable only for the difference between that value and the price when the asset is finally sold. Biden would allow a $1-million exemption for these changes.

So strap in your seat belts for a monthlong round of brinkmanship over federal spending and the national debt. You’ll hear stories about ordinary families crushed by their tax burden, and family farms and businesses driven to ruin by estate taxes, and dark mutterings about the cost of Social Security and Medicare and the need to cut back on these benefits.

The truth is, however, that America’s wealthiest taxpayers are paying a lower share of their wealth and income in taxes than at any time in more than a half-century, and the rest of us are poorer for it.