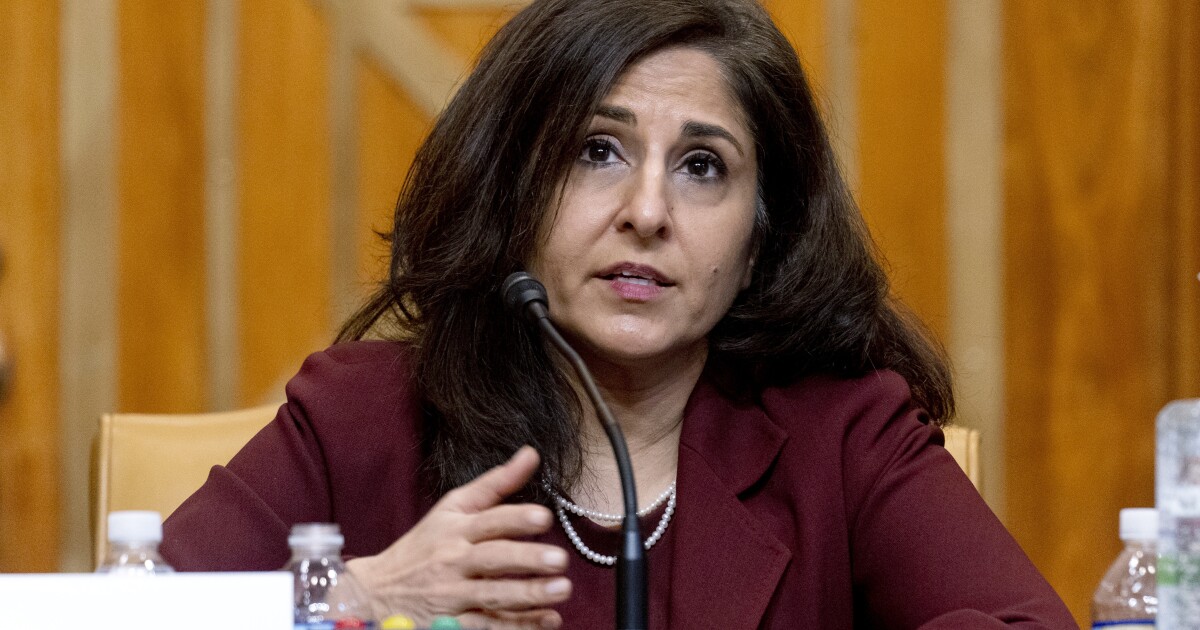 Just when you thought Washington had finally been made safe from hypocrisy — you can dream, can’t you? — one of the most hypocritical tropes in American politics has again raised its head.

We’re talking about demands for “civility” in public discourse. The idea that what the American model of politics is really missing is some variety of niceness has been wielded in efforts to kill President Biden’s nomination of Neera Tanden as director of the Office of Management and Budget.

Tanden’s nomination is hanging by a thread, following postponements of votes by two Senate committees Wednesday.

You wrote that Susan Collins is, quote, “the worst,” that Tom Cotton is a fraud, that vampires have more heart than Ted Cruz. You called Leader McConnell Moscow Mitch and Voldemort.

If Tanden’s critics have a beef about her administrative skills or qualifications to head the OMB, that’s been barely visible during her confirmation hearings or within the Washington punditocracy. Instead, the discussion has been dominated by hand-wringing about her pugnacious persona online — her “mean tweets.”

The focus by these critics (chiefly but not exclusively Republicans) on her tweeting, in which she has been sometimes less than politic, is as good a proof as one could ask for the proposition that Washington isn’t ready to get serious about the country’s problems.

Leave aside that Tanden’s resume includes working on healthcare reform in the Obama administration and serving as a top policy aide for Hillary Clinton. Instead, listen to Sen. Rob Portman (R-Ohio) come to a near-faint during a confirmation hearing about her tweeting:

“You wrote that Susan Collins is, quote, ‘the worst,’ that Tom Cotton is a fraud, that vampires have more heart than Ted Cruz,” Portman complained. “You called Leader McConnell Moscow Mitch and Voldemort.”

Any intelligent observer of American politics in recent years would say, “Pretty accurate, so far.” In any event, such language is fairly standard for a Twitter account.

Here are Sens. Joe Manchin (D-W.Va.), Susan Collins (R-Maine) and Mitt Romney (R-Utah) explaining why they find this so disturbing (courtesy of Greg Sargent of the Washington Post):

“Manchin claims that instead of confirming Tanden, we must end ‘political division’ and ‘chart a new bipartisan course.’ Collins insists Tanden has ‘demonstrated exactly the kind of animosity that President Biden has pledged to transcend.’ A Romney spokesperson claims Tanden’s ‘mean tweets’ imperil the ‘return to comity and respect.’”

These comments are massively hypocritical, given the complacency by Republicans and conservatives about the tone of American political discourse during the Trump years. Trump made his mark on Twitter by using it for relentless personal attacks—including several on Manchin, whom he labeled “weak & pathetic” and “Senator Joe Munchkin” last year.

Nor are members of the Senate above slinging intemperate invective of their own. Here’s Sen. John Kennedy, R-La., on Rep. Deb Haaland, D-N.M., President Biden’s nominee for Interior Secretary: “a neo-socialist left-of-Lenin whackjob.” He also said of Tanden, “I’m not saying she’s a smoked turkey, but the smoker is heating up.”

GOP Sen. John Kennedy calls Haaland a “neo-socialist left-of-Lenin whackjob,” per Hill pool. On Tanden, he says, “I’m not saying she’s a smoked turkey, but the smoker is heating up.”

Tanden may be the obligatory sacrificial lamb among Biden’s Cabinet choices — the one nominee consumed by Republican wolves to show they’re not pushovers for Biden.

As some of her supporters assert, she may also be the victim of a double standard, since intemperate language by male nominees hasn’t drawn the same scrutiny as hers. The “mean tweets” theme may only be a cloak for these cheesier approaches to her nomination.

But there’s an even more profound hypocrisy related to the elevation of “civility” to a quality of paramount importance in public debate. In reality, appeals for civilized discourse are demands for deference and tacit acquiescence, directed by established authority to the subjugated.

As I noted back in 2018, the idea is that if people would just air their views politely and tactfully, their adversaries would suddenly awaken to the error of their ways. Americans could then march hand-in-hand toward a nirvana of permanent comity.

The truth is that concerns about “civility” are a fraud. The goal is to blunt criticism and enfeeble the opposition. That’s why the term is so commonly wielded by those striving chiefly to preserve their own privileges against challenge.

No one saw this process more clearly than Martin Luther King Jr. In his unforgettable and irrefutable 1963 “Letter from a Birmingham Jail,” King took direct aim at clergymen in this most heavily segregated city in the South for their pleas for “moderation” by civil rights protesters.

The civil rights movement’s greatest obstacle, he wrote, was not the Ku Klux Klanner, but “the white moderate who is more devoted to order than to justice;… who constantly says, ‘I agree with you in the goal you seek, but I can’t agree with your methods of direct action.’”

Those who declare civility to be the sine qua non of political discourse are frequently those ever-so-politely promoting the most odious and deplorable policies.

Mick Mulvaney, who during the Trump administration held the job for which Tanden has been nominated, was a master at cloaking efforts to gut benefits for disabled Americans and eviscerate consumer protections behind a smile and a wink.

No one wrung their hands about the need for “comity and respect” when Mulvaney appeared before an audience of credit union executives in 2018 and called for being “mindful and respectful” of the interests of payday lenders, a spectacularly deceitful industry. At the time, Mulvaney held joint appointments as OMB director and head of the Consumer Financial Protection Bureau.

Instead, there were chortles all around when he began his speech with the words, “I am the acting director of the CFPB, something that’s apparently keeping Elizabeth Warren up late at night, which doesn’t bother me at all.”

As a concept, “civility” has no fixed definition. As a result, it’s useless in defining the boundaries of public discourse. One person can be deeply affronted (or claim to be) by language that another finds perfectly innocuous. Truth can be a defense against libel complaints, but not against charges of uncivil debate — it’s not about what you say, but how you say it.

Indeed, it’s not unusual to catch the avatars of “civility” engaging in behavior that others might consider, well, uncivil. As I wrote in 2019, Supreme Court Justice Neil Gorsuch flogged the “civility” theme hard in a collection of essays he published that year entitled, “A Republic, If You Can Keep It.”

“I worry that, just as we face a civics crisis in this country today, we face a civility crisis too,” Gorsuch wrote. “Self-governance turns on our treating each other as equals — as persons, with the courtesy and respect each person deserves — even when we vigorously disagree.”

On joining the Court, as it happens, Gorsuch acquired a reputation for condescension toward his colleagues and dismissive invective in his written opinions.

Legal scholar Richard L. Hasen raised that point in comparing Gorsuch to his intellectual mentor, the late Justice Antonin Scalia: Gorsuch, Hasen wrote, “has not only pledged fealty to Scalia’s methodology; he has also tried to emulate his snarkiness (although so far without much success in replicating Scalia’s charm).”

Cries for “civility” are often the last refuge of boors. Consider the performance of Rep. Tom McClintock (R-Elk Grove), after he was recorded in 2017 scurrying out of a meeting with angry constituents in his Northern California district, escorted by police. Many of the attendees had come to urge McClintock not to vote to repeal the Affordable Care Act, on which they depend for their healthcare.

A few days later, a rattled McClintock hoisted the civility flag on the House floor. “If your love of our Constitution is greater than your hatred of our president, I implore you to engage in a civil discussion with your fellow citizens,” he said. “That is what true democracy looks like.”

He then proceeded to label members of the district audience as “the radical left” and attributed the protests at the meeting — which police said were peaceful — to “a well-organized element that came to disrupt.” In an earlier interview, he described the protesters as “an anarchist element.”

Put all this together, and it becomes evident that the “civility” objection lodged against Tanden, like all invocations of this elusive and not especially worthwhile quality, conceals something uglier in American politics: desperation to hold on to privilege, at a time when the world is desperately in need of change.