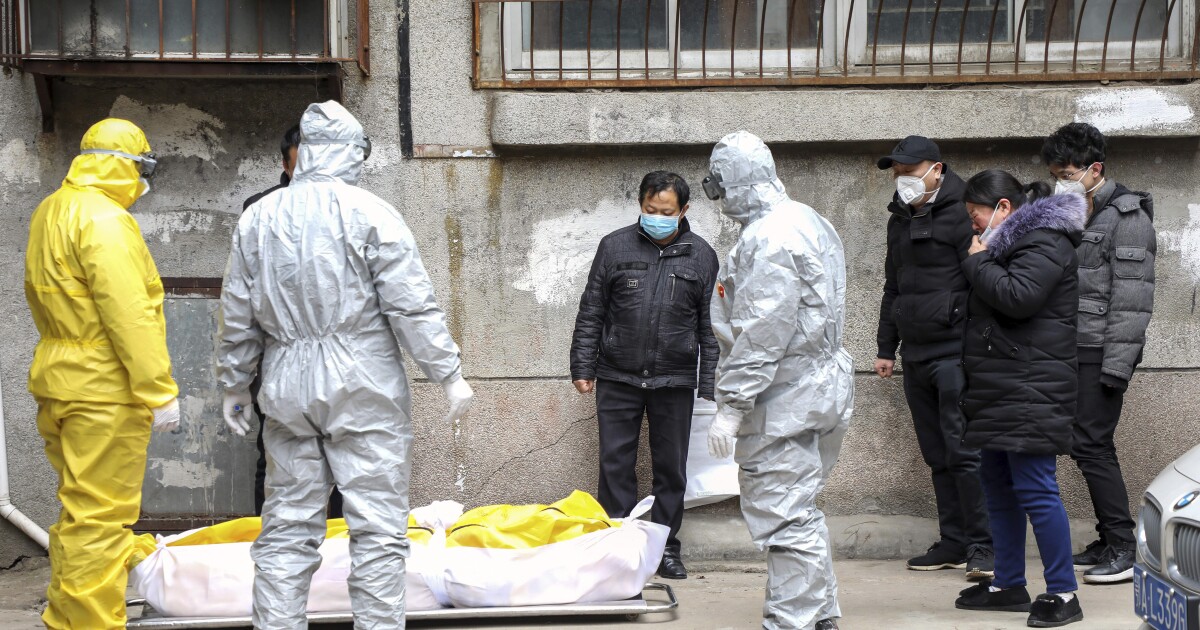 When it comes to the pandemic, pseudoscience has outweighed real science at almost every turn. One of the best examples of that is the unsupported assertion that the virus causing COVID-19 escaped from a Chinese laboratory.

Despite mounting evidence that the virus reached humans through natural pathways — from infected animals such as bats — the lab-leak hypothesis recently jumped back into the news, thanks to CNN, the investigative news site the Intercept, and the Atlantic.

All treat the idea that the virus escaped from a lab credulously. They downplay or entirely ignore the latest scientific findings that support the theory that the virus’ origin can be found in the animal kingdom — the view accepted by a preponderance of experts in virology.

It’s a likely probability that this one originated from animals as well. But the possibility also remains that the virus leaked from a lab.

This is known as the zoonotic theory, from the term for a disease that can be transmitted from animals to humans.

We’ve reported before on the near absence of evidence for a lab leak, whether or not it’s the product of a deliberate act.

Ever since the lab-leak claim first emerged during the Trump administration, where it was part of a White House information campaign demonizing China, one of the arguments in its favor has been that evidence for a zoonotic origin has also been spotty.

That argument has never been quite true — virologists know that animals have been the source of most of the viral diseases afflicting humanity — but it has become weaker than ever over the last year.

The question of the origin of COVID-19 isn’t of merely academic interest. The answer could guide the world’s preparation for future pandemics; if the virus emerged from a laboratory, then improving lab safety measures will be prioritized. If scientific opinion continues to coalesce around animal-to-human transmission, that will underscore the importance of regulating contact between humans and wildlife.

To put it another way, if we focus on the wrong answer, the right measures won’t be taken. In a real sense, humankind’s future depends on not being distracted by an unsupported, politically motivated claim about Chinese labs.

Before examining the flaws in the CNN, Intercept and Atlantic treatments, let’s look at what’s been published recently about the zoonotic path.

For context, keep in mind that the earliest cluster of COVID-19 cases, in late 2019, was identified in the environs of the Huanan seafood market in the Chinese metropolis of Wuhan. Lab-leak theorists find this significant, because it’s 7.5 miles from the Wuhan Institute of Virology, which does research on bat viruses.

A paper posted online earlier this month chiefly by researchers at France’s Institut Pasteur and under consideration for publication in a Nature journal, however, reports that three viruses were found in bats living in caves in northern Laos with features very similar to SARS-CoV-2, the virus responsible for COVID-19.

As Nature reported, those viruses are “more similar to SARS-CoV-2 than any known viruses.”

Another paper, posted in late August by researchers from the Wuhan lab, reports on viruses found in rats also with features similar to those that make SARS-CoV-2 infectious in humans. A third paper published on the discussion forum virological.org on Sept. 2 presents evidence that the virus jumped from animals to humans at more than one animal market in Wuhan, not just the Huanan seafood market.

Given that these so-called wet markets have long been suspected as transmission points of viruses from animals to humans because they sell potentially infected animals, that makes the laboratory origin vastly less likely, according to one of the paper’s co-authors.

“That a laboratory leak would find its way to the very place where you would expect to find a zoonotic transmission is quite unlikely,” Joel Wertheim, an associate professor at UC San Diego’s medical school, told me. “To have it find its way to multiple markets, the exact place where you would expect to see the introduction, is unbelievably unlikely.”

As virologist Robert F. Garry of Tulane, one of Wertheim’s co-authors, told Nature, the finding is “a dagger into the heart” of the lab-leak hypothesis.

Garry and Wertheim are among the 21 expert co-authors of a “critical review” of virological findings on the origins of COVID-19. The review concludes, “There is currently no evidence that SARS-CoV-2 has a laboratory origin.”

Now let’s look at the recent reporting in support of the lab-leak theory.

On Sept. 19, CNN aired an hourlong documentary entitled “The Origins of COVID-19: Searching for the Source.” Hosted by the channel’s star science anchor, Sanjay Gupta, the program carries the veneer of an evenhanded approach.

Proponents of the zoonotic origin theory are given airtime, including Kristian Andersen of the Scripps Research Institute in La Jolla and Peter Daszak, a prominent grant maker in the virology field.

But so are proponents of the lab-leak theory. They include Alina Chan, a researcher at the Broad Institute, a biomedical research center, and Josh Rogin, a Washington Post columnist. Neither has any experience in virology. Chan is co-writing a book about COVID’s origins that is expected to feature the lab-leak theory prominently, a fact not mentioned by CNN.

Yet at the top of the hour, referring to the common pattern of viruses jumping from animals to humans, Gupta says, “It’s a likely probability that this one originated from animals as well. But the possibility also remains that the virus leaked from a lab.”

By posing these two theories as simply two equally plausible solutions to a mystery, CNN glosses over the fact that the virological community regards the animal origin as vastly more likely than a lab leak. In fact, the two hypotheses are miles apart in credibility.

One of the program’s chief targets is a report by a World Health Organization team issued in early 2021 that found spillover from an animal host to be “likely to very likely” and a laboratory incident an “extremely unlikely pathway.”

Gupta calls the WHO report “the only scientific study of COVID’s origins to date.” That’s not remotely accurate. There have been countless scientific studies, both before the WHO report and since. Indeed, Gupta mentions one of them, a seminal paper by Andersen and colleagues, published in March 2020. That paper termed the lab-leak theory “a speculative incomplete hypothesis with no credible evidence.”

Much of the rest of the CNN program is filled with speculation about the Wuhan Institute, typically presented with portentous music on the soundtrack, suggesting subliminally that something sinister is going on there. The absence of information from the institute or the Chinese government is generally taken as tantamount to an admission of guilt.

“Over the course of 2020,” Gupta declares, “more and more revelations emerged related to the Wuhan Institute of Virology.”

One of these revelations concerned three staff members who reportedly sought hospital treatment for a flu-like illness in November 2019, before the COVID pandemic emerged.

Nothing has ever transpired to suggest these workers had COVID — November is flu season, after all. That they sought treatment at a hospital is immaterial, since it is well-known that people in China often go to hospitals for primary care, which residents of other countries would tend to receive in a doctor’s office.

A CNN reporter appearing on air overstated the case, saying the patients were “hospitalized with an unknown illness.” There has been no evidence that they were admitted to the hospital or that their illness was “unknown.”

CNN doesn’t bring its audience up to date on any of the latest research supporting the zoonotic theory, though it was published well before the air date and superseded what Gupta described as “the only scientific study” of COVID origins.

More recently, the Intercept trumpeted a purported scoop based on a leaked document — a grant proposal submitted in 2018 by Daszak’s organization, the EcoHealth Alliance, to the Pentagon’s Defense Advanced Research Projects Agency, or DARPA.

The proposal, for a laboratory manipulation of a virus related to SARS, the viral disease that caused an outbreak of pulmonary disease in China in 2003. DARPA rejected the proposal, however, and there’s no evidence that it was submitted to, much less approved by, any other funding body.

“Many questions remain about the proposal, including whether any of the research described in it was completed,” the Intercept acknowledged.

Commentators on the Intercept’s disclosure have displayed, perhaps in spite of themselves, that they lack the courage of their own convictions. In an article published Sept. 24, the Atlantic, unable or unwilling to delve into what the Intercept’s document actually meant, if anything, settled for declaring that it made the lab-leak debate “even messier.”

The magazine’s Daniel Engber and Adam Federman wrote: “Does the SARS-CoV-2 pandemic have an unnatural origin? The answer hasn’t changed: probably not. But we have learned something quite disturbing in the past few days, simply from how and when this information came to light.”

By pretending that the debate itself is important, as if both sides have something to offer, they manage to report on a claim that has no substance. The approach also protects journalists from their persistent fear of landing on the wrong side of things — the authors preserve an out in case the lab-leak hypothesis turns out to be true, as unlikely as that is. If that happens, they can point to their lily-livered observations and say, “See, we knew it all along.”

In this debate, however, the zoonotic camp has evidence and the lab-leak camp nothing to offer but innuendo.

Here’s the true state of the discussion. There is no evidence that the virus leaked from the Wuhan laboratory or any other lab. There is no evidence that the Wuhan lab was working with a bat virus that had anything but a very distant resemblance to SARS-CoV-2. Viruses that resemble it much more closely have been found in natural settings a thousand miles from Wuhan, as the crow, or bat, flies.

Evidence that artificial manipulation of a virus gave rise to SARS-CoV-2 has faded, as scientists find more evidence that features of SARS-CoV-2 thought to be unnatural occur in nature. Meanwhile, evidence for zoonotic transmission is constantly accumulating. No one who reports on the issue without acknowledging these two trends should be trusted.

Tags: Los Angeles News
Previous Story
Column: You do know that, in most cases, bottled water is just tap water?
Next Story
Column: Few have quit their jobs over COVID-19 vaccine mandates, but thousands have gotten shots