Column: ‘Renewable natural gas’ is the latest sham from the oil & gas industry

Column: ‘Renewable natural gas’ is the latest sham from the oil & gas industry 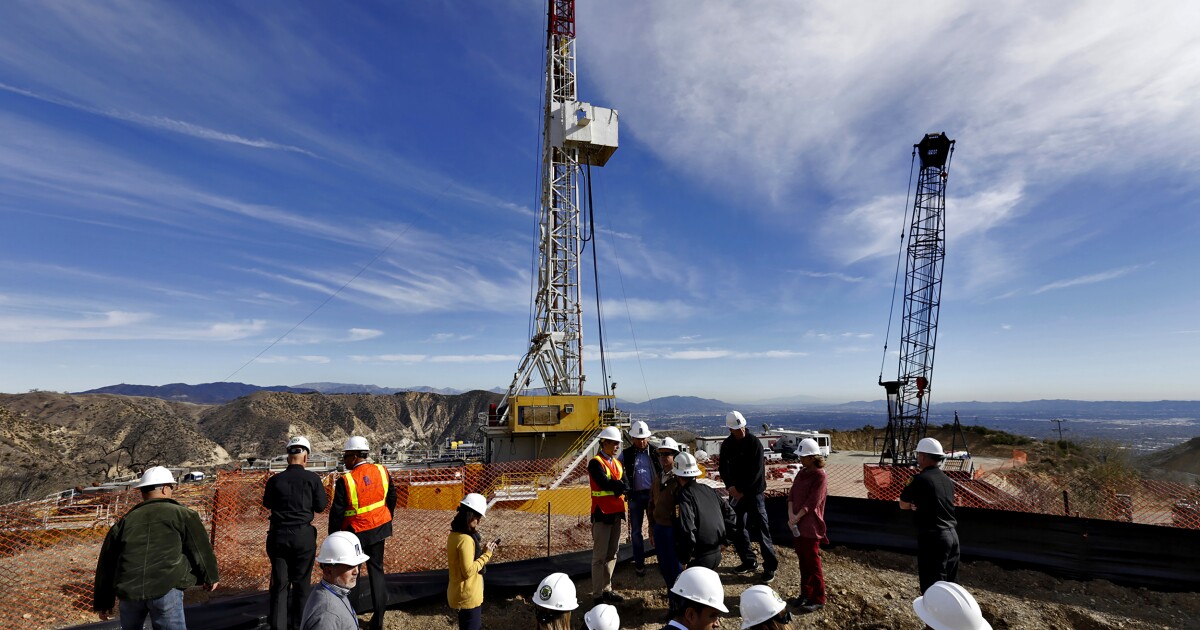 Followers of Chevron’s management undoubtedly have noticed that they’ve lately been boasting about their leadership in the the fight against global warming.

They’ve been talking about investing in hydrogen, “carbon capture” and “renewable fuels,” most notably at a Sept. 14 investor presentation and a series of appearances by CEO Mike Wirth on CNBC.

Wirth put in a strong plug for renewable natural gas, which he named as a part of the “primary focus” of the company’s low-carbon strategy in coming years.

Parts of the gas industry are using wildly exaggerated claims about the feasibility, cost and impacts of these fossil gas alternatives.

This pitch is critically important for Chevron, because shareholders have put management under the gun. At its annual meeting in May, a stunning 60.7% of shareholders voted for the company to “substantially” reduce its greenhouse gas emissions.

So here’s something you need to know about “renewable natural gas.” It’s a sham. Not only is it not really “renewable” in the same sense as wind, solar or hydroelectric power, which produce energy without consuming their sources, but it will have at best a minuscule impact on global warming.

That’s the conclusion of environmental scientists, who tend to think of “renewable natural gas” as PR branding by fossil fuel companies anxious to give their business models a green veneer while staving off regulations that would significantly cut back on gas consumption.

To promote the concept, these companies gloss over the fact that renewable natural gas, or RNG, is as much as five times as expensive as traditional fossil-produced gas, that its availability is limited compared to overall gas demand, and that its role in addressing global warming will be negligible at best.

“Parts of the gas industry are using wildly exaggerated claims about the feasibility, cost and impacts of these fossil gas alternatives,” says Mark Kresowik of the Rocky Mountain Institute, an ecological think tank. Their goal, he says, is to “delay and undermine the beneficial investments that cities and states want and need to make to avoid the worst impacts of climate change.”

Indeed, one of the leaders in promoting “renewable natural gas” is Southern California Gas, the nation’s largest natural gas utility. As my colleague Sammy Roth has reported, for SoCal Gas, the state’s policy of weaning homes and offices from gas for heating and cooking by encouraging the conversion of buildings to all-electric sources poses an “existential threat.” (Although many electric plants run on natural gas, that’s cleaner than residential and commercial use in part because the plants are more efficient and have scrubbing technology to take greenhouse gases out of their emissions.)

SoCal Gas told me by email that it “continues to make good progress” toward its plans to provide 20% of its customers’ gas consumption from renewable sources by 2030. That’s a goal that many energy experts believe is unattainable, especially at an economical price. The gas company also says it has “made great strides” in reducing methane leaks from pipelines — a troublesome route by which methane reaches the atmosphere. The company says that recapturing methane, the key component of gas, from the emissions of decomposing waste “helps solve a greenhouse gas emissions problem.”

Yet many environmental experts argue that replacing traditional natural gas with RNG would do relatively little to address global warming, since gas from any source is a powerful contributor to the problem.

A Chevron spokesman told me by email that renewable natural gas is “part of Chevron’s portfolio of technologies and solutions” aimed at that goal, the spokesman said, and quoted a Chevron executive’s remarks at the Sept. 14 event that the company expects “double-digit returns” from RNG. The company said that its investment in methane capture could “potentially mitigate emissions of 258 million tons per year of animal manure and has the potential to reduce manure runoff into rivers and water supplies.”

As Emily Grubert of Georgia Tech observed last year, RNG probably would contribute to global warming, not fight it. An issue brief from the Natural Resources Defense Council observed last year that RNG is “often not as climate-friendly as claimed,” that burning it “still creates harmful air pollutants,” and that “the limited supply and high cost of these fuels … inherently limit what they can contribute” to the fight against global warming.

To dig deeper into what the Sierra Club has termed the fossil fuel industry’s greenwashing campaign, let’s examine what they mean by renewable natural gas.

It’s methane gas that isn’t obtained by underground extraction, the traditional means of producing oil and gas. Rather, it’s captured from ground-level methane-producing sources such as organic material in landfills, wastewater and manure from dairy cattle.

Equipment costing millions of dollars per installation collects this methane and conditions it to a point where it’s chemically indistinguishable from traditional natural gas. Then it’s injected into gas pipelines for distribution to consumers.

Oil and gas companies love to describe this product, which energy experts more accurately label biomethane or biogas, as “clean.” That’s the theme of a cheery animated video with an up-tempo musical soundtrack on the SoCal Gas website.

But it’s not as clean as its promoters contend. On the plus side of the ledger, when it’s burned — say on a stovetop — it produces less carbon dioxide than traditional natural gas. That’s somewhat of a gain, since carbon dioxide is a major greenhouse gas. But it’s still methane, which has more than 80 times the warming power of carbon dioxide when it first reaches the atmosphere.

The risk is that profits to be made from renewable natural gas could encourage more methane production from sources that don’t already exist, say from crops grown for the purpose. If owners of existing sources such as landfills chose to direct their emissions to the gas system rather than burning it off in flares, that means more methane, a negative for global warming, according to studies by the Environmental Defense Fund and World Resources Institute, among others.

Moreover, these sources are themselves unclean. Effluent and emissions from dairy farming and landfills pollute the air and water in the local communities. Reducing that pollution requires reducing those sources’ footprints through smaller-scale farming and conservation and recycling to reduce waste. The prospect of profits from methane capture, however, encourages larger factory farms, which are best positioned to benefit from the costly equipment.

“The system is propping up these huge factory daily farms,” says Rebecca Spector, West Coast director for the Center for Food Safety. “It’s a false solution to combating climate change and one that perpetuates harm to the environment.”

There is a role for biogas, experts agree — as a niche product with limited applications. That’s because its sources are limited even under the most optimistic reasonable scenarios.

“There is not enough high-quality RNG nationally available to meet even Southern California’s demand,” Michael Colvin of the Environmental Defense Fund told me. That implies that the proper role for biogas is for use in sectors that can’t easily be electrified, principally heavy industries such as steel production, maritime shipping and as aviation fuel. Chevron acknowledged that basic truth in its Sept. 14 presentation. SoCal Gas says it’s confident that there is “sufficient RNG feedstock” to meet its 2030 goal.

Southern California Gas remains focused on the residential and commercial markets, which together account for about one-third of California gas consumption. Those users, however, are easiest to convert to all-electric use; the changeover largely requires swapping out gas appliances and heaters for electric.

Those users are also the targets of state policies. Last year, the California Public Utilities Commission approved $200 million in incentives to reduce demand for all forms of gas from the state’s energy market, including $80 million for the construction of all-electric housing and $120 million to encourage low-emission space and water heaters in the home.

What’s really driving the campaign to make natural gas look green is the desperation of companies such as Chevron and SoCal Gas to turn a blind eye to consequences of global warming for their own destinies. The pressures on those companies to chart a new course are similar, though their sources differ.

Although Chevron got a wake-up call from its investors at the last annual meeting, its management seems intent on snoozing through the alarm.

Wirth told CNBC’s Jim Cramer that Chevron won’t be investing in wind and solar power, because the financial rewards from those investments are too small. He said shareholders were free to spend their Chevron dividends on green energy if they wished, while the company aimed at reducing the carbon component of its more traditional businesses — that is, oil and gas.

“That’s well short of what a majority of shareholders said they’re looking for” in this year’s vote, says Andrew Logan, an oil and gas expert at Ceres, a Boston nonprofit that helps develop sustainability strategies for industry. Management’s complacency could produce “fireworks” at the next annual meeting in the spring, he told me.

As for SoCal Gas, it’s facing what could be a major decline in gas demand from residential and commercial customers, as state policies favoring electrification take hold. The company has cited the finding of a study it commissioned that replacing 18% of the natural gas in its pipelines with RNG would have as beneficial an impact on global warming as converting almost all the homes and offices it serves to electricity.

That study, however, has been roundly criticized by environmentalists, who say it ignored the effect of methane leaks from the gas company’s pipelines and overestimated the potential supply of RNG. The latter point was backed up by a 2019 study commissioned by the gas company’s parent, Sempra, which concluded that RNG could replace only about 9.4% of the natural gas in the state’s pipelines by 2030 — half the SoCal Gas goal.

It’s fair to assume that the gas company knows it’s blowing smoke by promising great gains from RNG. As Roth and I reported in 2019, the company was accused of setting up an astro-turf community group in 2019 to promote renewable and natural gas as a solution to global warming by framing the issue as one of free choice for consumers. If it had the courage of its convictions, it would hardly have needed to communicate them through fakery.

“It’s important that talking about renewable natural gas doesn’t distract from the point that we need to reduce the use of gas in all these applications to the maximum extent possible,” says Jeremy Martin, an expert on clean fuels at the Union of Concerned Scientists. “The fact that a little bit of it can be captured from waste shouldn’t cloud that overriding priority.”

Tags: Los Angeles News
Previous Story
Column: How you pay for electricity is changing. Here’s what you need to know
Next Story
Disney sues former Marvel artists over Iron Man and Spider-Man rights