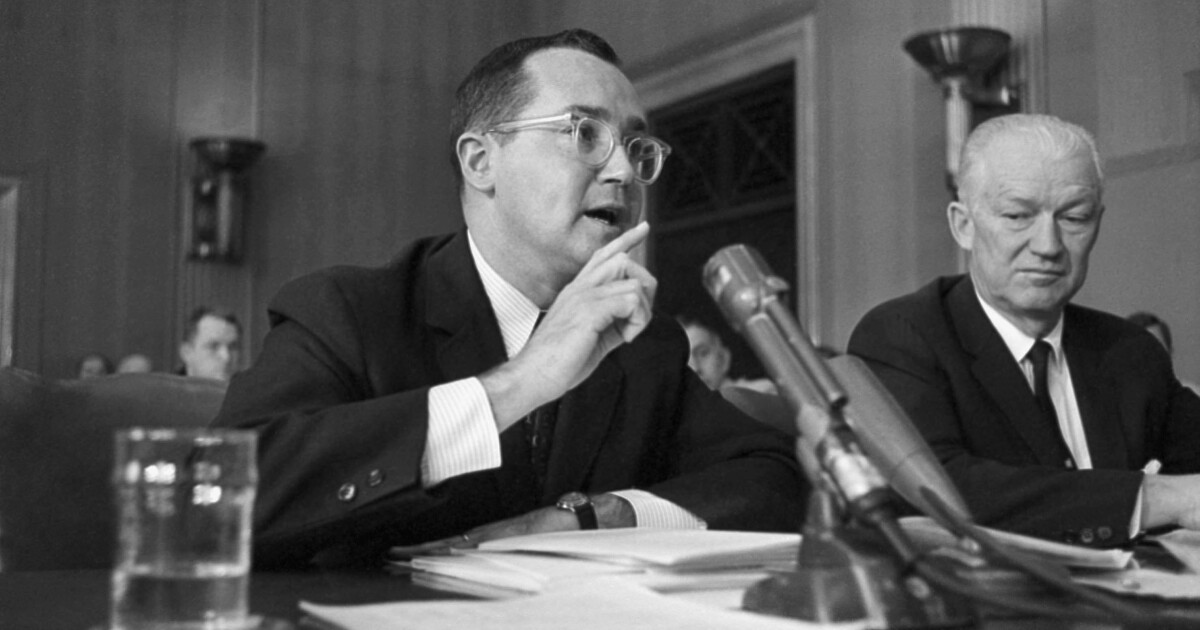 It may be the most famous broadside launched by a government official in American history:

Sixty years ago this Sunday, Newton N. Minow invited the television executives gathered in Washington for his first official speech as chairman of the Federal Communications Commission to spend a day watching their own broadcasts.

“Keep your eyes glued to that set until the station signs off,” he said. “I can assure you that what you will observe is a vast wasteland.”

At that moment, the phrase “a vast wasteland” became an indelible part of the American political lexicon — not merely because of the power of the words themselves, but because of their fundamental truthfulness.

In the six decades since Minow’s speech to the National Assn. of Broadcasters, the landscape has become vaster, its average quality ever diminished.

What was then a choice limited to three broadcast TV networks (and the third-ranked, ABC, then reached only about half the country) now encompasses much more.

There are hundreds of channels available via cable as well as numberless sources of entertainment content, information, misinformation and disinformation streamed at users unrelentingly, night and day, via social media.

“When I was at the FCC, we thought the government’s role should be to increase choice for the viewer,” Minow, 95, told me recently.

“Looking back at it, I’m not so sure that was such a great idea,” he says. “Because of the proliferation of voices, you now have a huge number of outlets seeking attention, and many of them think the way to seek that attention is to go to the extremes.”

Think of it as the eternal search for the happy medium. To this day, Minow counts among his finest achievements the opening of the UHF band to television broadcasters, expanding the number of available channels from 13 to more than 80, and liberalizing the rules for FM radio.

He also points to his championing of what was then known as educational television and became the basis for public broadcasting. “As I look back at it, that was the one really good thing I’m proud of.”

As a board member of the precursor of PBS following his stint on the FCC, Minow played a role in obtaining funding for Sesame Street, the groundbreaking children’s program that he calls “the answer to my dreams.”

As it happens, Minow’s bill of particulars in his 1961 speech included the paucity and wretchedness of children’s programming.

“Is there no room on television to teach, to inform, to uplift, to stretch, to enlarge the capacities of our children?” he asked the TV executives. “There are some fine children’s shows, but they are drowned out in the massive doses of cartoons, violence, and more violence. Must these be your trademarks?”

Minow adeptly contrasted the shining technological advances of the ‘60s with the muck and mire of TV programming.

“Ours has been called the jet age, the atomic age, the space age,” he said. “It is also, I submit, the television age. And just as history will decide whether the leaders of today’s world employed the atom to destroy the world or rebuild it for mankind’s benefit, so will history decide whether today’s broadcasters employed their powerful voice to enrich the people or to debase them.”

An audio clip of the speech on May 9, 1961, doesn’t record his listeners’ immediate reaction to his scolding.

But “the public reaction was very positive on all counts, except for the people in the business,” Minow told me. (The TV producer Sherwood Schwartz fired a return shot by naming the shipwrecked boat in his series “Gilligan’s Island” the S.S. Minnow.)

“But I understood that,” Minow says. “I knew what I was doing, that there needed to be a wake-up call.”

Minow speaks not merely as a former FCC chairman but with the wisdom of decades of service on the boards of public corporations and nonprofit institutions — book and newspaper publishers, broadcasters, consumer companies, Rand Corp., the Mayo Clinic, and Northwestern and Notre Dame universities.

“My front seat gave me diverse perspectives,” Minow has written. “I’ve seen every side of the elephant, including the back side.”

Minow’s chief concern is that the linchpin of communications regulation virtually from its inception has all but disappeared. That’s the concept of “the public interest.”

The concept was defined vaguely in communications law. But as Minow explained in a recently published Q&A with his daughter Nell, a prominent advocate for corporate shareholder rights, the underlying principle was well understood: Serving the public interest was the price of broadcasters’ access to publicly owned airwaves.

The bargain, Minow said, was that “broadcasters would be given a license at no charge, to use a public resource. In exchange, they were to serve the public interest, convenience and necessity.”

As FCC standards evolved, Minow said, “you had to have local news and different forms of service to the community, including fairness and covering controversial issues.”

As TV technology moved to cable transmission — no longer reliant on public airwaves — the standards evaporated as did, arguably, the government’s ability to enforce standards through the threat of license revocation.

“Two words — public interest — are disappearing from communication policy,” Minow writes in the preface to “Saving the News,” a forthcoming book by his daughter Martha, a law professor at Harvard.

“As technology changes,” Minow writes in the preface, “public policy lags behind. And the basic concept that our communication systems are to serve the public — not private interest — is now missing in action.”

The book argues that technological change doesn’t prevent government from taking steps to advance the public interest such as regulating digital platforms as public utilities, using antitrust authority to regulate the media, and providing more funding for public media.

The heart of the public interest mandate was the “fairness doctrine,” requiring a radio or television network reporting on controversial topics to present all responsible aspects of the topic in a balanced fashion.

The FCC repealed the rule in 1987, under Ronald Reagan, on the grounds that it infringed free speech. But its repeal is also blamed — or credited — for facilitating the rise of unfiltered talk radio, especially on the right.

More than “fairness” is lost through the disappearance of the public interest. In his preface to Martha’s book, Minow recalls how in the past radio and television “united our country in times of crisis, such as after the assassination of President Kennedy and the 9/11 terrorist attack.”

That capability of forging a community among Americans seems quaint today, when TV, radio and social media exploit crises to heighten divisions among the public.

“What alarms me is that facts no longer seem to be important,” Minow told me. It’s too easy to blame the elevation of “alternative facts” on Donald Trump, even though it was a centerpiece of his presidency.

“People have lost trust in the media, they’ve lost trust in most institutions in America,” he says. “We’ve had things that caused them to lose their trust — the war in Vietnam, Watergate — so that has led to this current and very unpleasant and I think in many ways a very scary situation. The Trump years accelerated that, but it existed before.”

The harvest, he writes in the book preface, “is a profound challenge to democracy…. We have ironically so democratized the speech market that no one can be heard, bad actors flood social media, and democratic deliberation is damaged.”

Looking back, Minow told me, “I’m very satisfied with most of what has happened, but very disappointed with this screaming and hollering and yelling about the facts and the news which is dividing the country. To me it’s a mixed bag.”

I asked him if he thought it would be possible to restore the public’s faith in facts. “If we don’t figure that out,” he replied, “we’re doomed.”