Column: Surprise! Postal service is about to get slower — and more expensive

Homepage News Column: Surprise! Postal service is about to get slower — and more expensive
News

Column: Surprise! Postal service is about to get slower — and more expensive 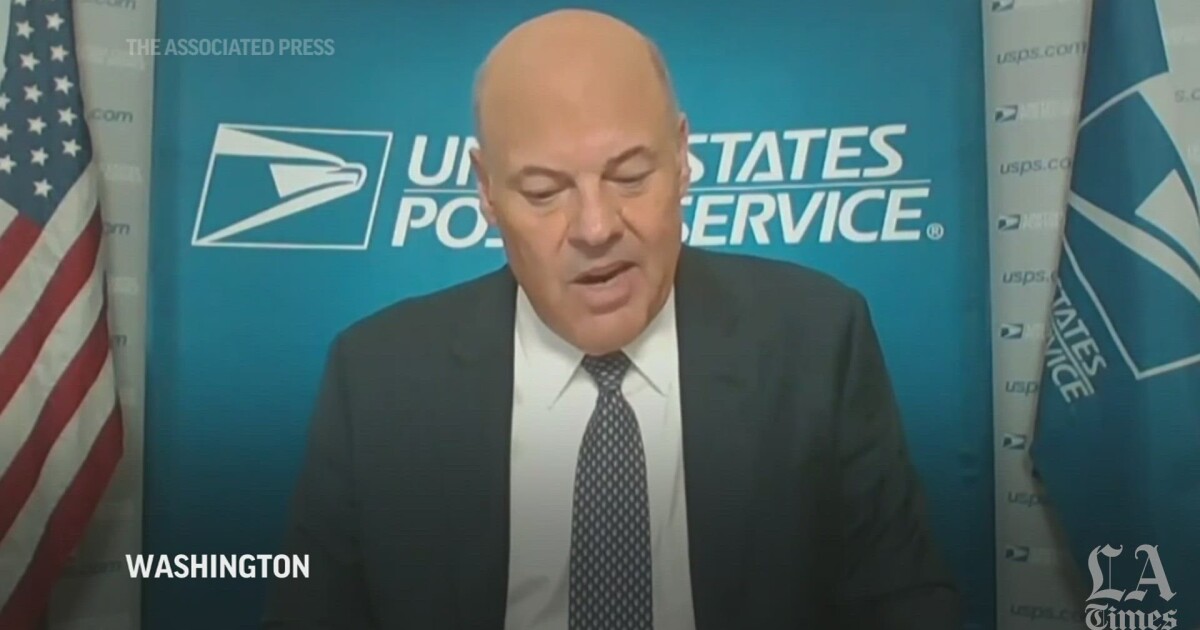 Is there a federal official more out of step with the purposes of his agency than Postmaster General Louis DeJoy?

Sorry, that’s a rhetorical question, because everyone knows the answer: Of course it’s “no.” DeJoy is about to prove it once again by mandating crummier service on first-class mail and hiking prices on your packages.

Starting Friday, the U.S. Postal Service is giving itself extra time to deliver letters longer distances than can be reached by a six-hour drive.

With this change, we will improve service reliability and predictability for customers while also driving efficiencies across the Postal Service network.

Instead of the previous standard, which called for first-class mail to reach its destination in a maximum of three days regardless of the distance, the maximum will be five days. Obviously, that would apply to a letter sent, say, from New York to Los Angeles. The change starts as of Oct. 1.

The USPS is also raising prices on domestic parcels by anywhere from 25 cents to $5, depending on the packages’ distance and weight. The service says the price increase is “temporary,” starting Oct. 3 and remaining in effect through the holiday season, ending Dec. 26. The increases can come to 10% or more.

In an absurd example of corporate-speak, the Postal Service describes the aim of reducing delivery standards as improving “delivery reliability, consistency, and efficiency.” As USPS spokeswoman Kim Frum put it: “With this change, we will improve service reliability and predictability for customers while also driving efficiencies across the Postal Service network.”

Let’s be clear about this. Increasing the time you have to wait to receive a letter isn’t an improvement in reliability or efficiency, but just the opposite. As for “consistency,” the service’s strategy is perfectly analogous to what airlines do when their on-time flight performance deteriorates: They increase the standard for “on time,” and presto! Every flight is on time again.

Consistently bad performance is consistent all right, but that doesn’t make it something to brag about. The Postal Service said the changes would leave 61% of first-class mail volume unaffected, as if that were all to the good. The math indicates, however, that fully 39% would take longer to reach its destination.

A USPS spokeswoman called the old three-day standard “unattainable,” but that’s so only because the service doesn’t choose to meet it. Doing so would require the service to “rely on air transportation, yielding unreliable service,” she told USA Today. She didn’t explain why air service is inherently more unreliable than trucking mail across country or sending it by train.

The Postal Service’s complacency in the face of deteriorating performance must be blamed on DeJoy, whose appointment was orchestrated in 2020 by a Trump-controlled USPS board of governors.

He was the first postmaster general in two decades not to have any experience with the service. On the other hand, he had been a major fundraiser for the Trump campaign. Insiders related how Dejoy’s name had been inserted into the short list for postmaster candidates seemingly out of nowhere. Possibly this reflected interference by then-Treasury Secretary Steven Mnuchin, who should have kept his hands off.

Questioned by congressional committees about noticeable declines in service on his watch, DeJoy, a former executive of a private logistics company, truculently defended his intention to make the service operate more like a business than a government agency.

To that end, he oversaw a 10-year strategic plan designed to narrow the service’s deficit the way a struggling private business would — by stretching out mail delivery deadlines, raising postal rates (perhaps steeply), cutting back on post office hours and closing branches.

The changes in standards and rates that DeJoy is implementing in the next few days come right out of that strategic plan. The changes are expected to save about $170 million a year, or about two tenths of a percent of its operating budget of more than $82 billion. But they will have significant impacts on many postal customers.

DeJoy’s actions are somewhat subject to the independent, five-member Postal Regulatory Commission, which has limited powers to block service changes. The commission, which has a 3-2 Democratic majority, issued a critical analysis of the upcoming changes on Wednesday.

The analysis said that DeJoy’s estimate of cost savings from the changes seemed inflated and that they could “diminish its reliability.” The commission said it doubted the USPS could even manage the changes it was implementing, and recommended that they be delayed. The betting here is that DeJoy won’t pay the recommendation any attention.

It should go without saying that the USPS is not a business, but a public service. It’s true that its traditional standards can’t be profitable in customary business terms. It’s expected to deliver letters anywhere in the United States for the same flat fee, whether it’s traveling across town or coast-to-coast.

With few exceptions, its carriers are expected to reach every household. In return, it’s endowed with an effective monopoly on first-class mail. Its postmarks can legally serve as documentation of when an item was mailed, whether a postcard or a ballot.

It’s true that the service’s revenues have come under pressure as letter mail gives way to electronic communications, and banks and retailers move away from mailing account statements and bills to customers in favor of dealing with them online.

But it’s well-known that the biggest single burden on the service’s bottom line is a 2006 congressional mandate that it prefund its retiree healthcare liability, which no other government agency and few private businesses do. (Most fund those obligations on a pay-as-you-go basis.)

Absent that mandate, the Institute for Policy Studies calculated in 2019, the USPS would have consistently reported operating profits instead of losses. DeJoy has acknowledged the burden of the prefunding mandate, the repeal of which would require congressional action. But his treating congressional committees as troublesome busybodies wasting his time with their questions doesn’t make him a very suitable advocate for that change.

It’s also true that DeJoy doesn’t serve at the president’s pleasure, but rather that of the nine-member USPS board of governors.

At the moment, the board is split 6-3 with Trump appointees in the majority, but one of those Trump appointees is a holdover member whose term ended last year, and the term of another expires in December and two more in December 2022. That means that Biden can have a majority by the end of this year. Nothing is keeping the present board from canning DeJoy right now, anyway.

Already, the Biden cadre has begun to make its voice heard. At the board’s August meeting, newly-appointed member Ronald Stroman, a former deputy postmaster general, called DeJoy’s plan “strategically ill-conceived.” He said it would create “dangerous risks that are not justified by the relatively low financial return, and doesn’t meet our responsibility as an essential part of America’s critical infrastructure.”