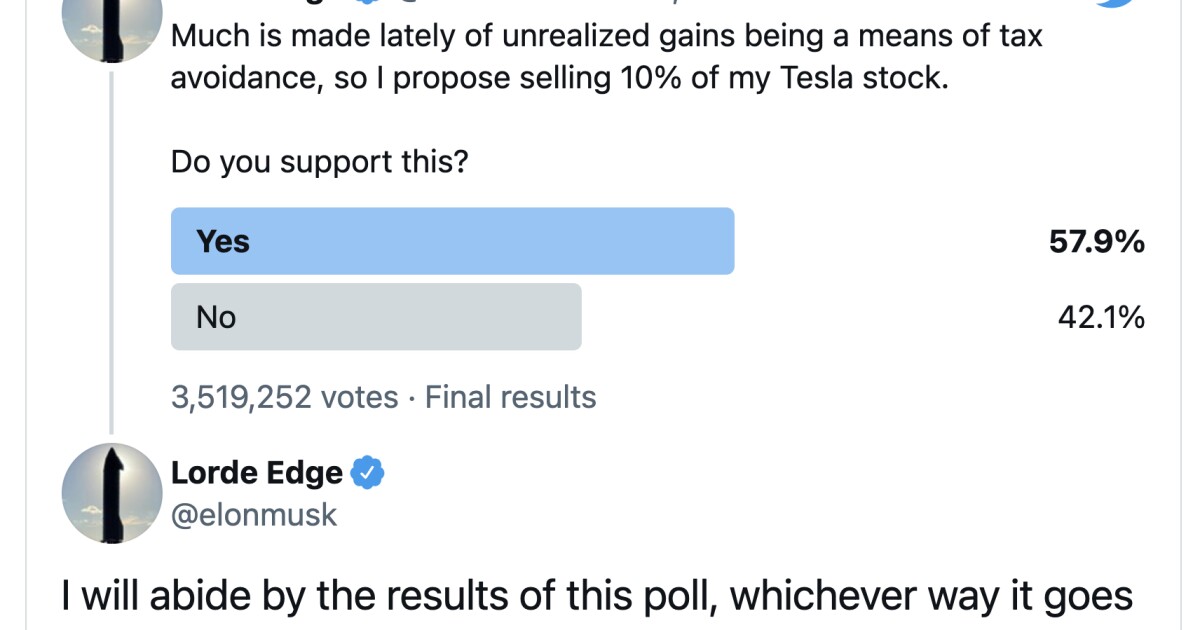 Thanks to Elon Musk, who is often credited as the world’s richest person, we now have a good clue to whether someone has too much money. That clue is when he turns tax policy into a Twitter game.

Musk on Saturday responded to a proposal to impose a tax on billionaires’ wealth by launching a poll on Twitter, asking followers whether he should sell 10% of his shares in the electric vehicle company Tesla. He pledged to “abide by the results of this poll, whichever way it goes.”

Whether or not the world’s richest man pays any taxes at all shouldn’t depend on the result of a Twitter poll.

Musk’s approach earned brickbats from people who think seriously, not whimsically, about the social and economic implications of concentrated wealth.

One is Sen. Ron Wyden (D-Ore.), who crafted the proposal that drew Musk’s ire. Wyden’s plan, which hasn’t survived the legislative give-and-take on Capitol Hill, would have taxed the unrealized gains in capital assets such as stock each year. Under current law, capital gains aren’t taxed until the asset is sold — providing wealthy people with convenient means to avoid the tax for years, decades and even forever.

“Whether or not the world’s richest man pays any taxes at all shouldn’t depend on the result of a Twitter poll,” Wyden tweeted. He was seconded by UC Berkeley economist Gabriel Zucman, who helped design a billionaires tax proposed during the last presidential campaign by Sen. Elizabeth Warren (D-Mass.).

Whether or how Musk will fulfill his pledge to sell 10% of his Tesla shares, now that the voting is closed, is open to question. As we’ve observed in another context, with Musk, it’s always better to wait until he fulfills a promise than to take it as a done deal. He hasn’t said when he would start selling his shares, or in what form, or over what period of time.

A few points about Musk’s wealth and his potential tax liability are germane, however. Musk said on Twitter that he does not take compensation from Tesla or his other companies via a cash salary or cash bonus. “I only have stock, thus the only way for me to pay taxes personally is to sell stock,” he tweeted.

As of June 30, Musk was reported to own 244 million shares of Tesla, or about 23% of its stock. That includes 73.5 million shares Musk is due from exercising 2012 stock options that expire at the end of August 2022.

The common estimation of Musk’s wealth is largely dependent on the price of Tesla shares, which were trading at about $1,181 as these words were being written. That placed a value of about $288 billion on Musk’s stake.

More than 88 million of those shares are pledged as collateral on debts Musk has accumulated, according to Tesla’s 2021 proxy statement. That’s a clue to how the ultrawealthy avoid paying more than a pittance of tax on their wealth: They borrow against it to cover living expenses. Loans like those aren’t reportable as taxable income, so it’s free and clear. Rich stockholders can wait to sell until conditions are most advantageous.

Even more troubling, if they hold the assets until their death, the embedded capital gains tax is extinguished entirely; their heirs will owe tax only on the gain in value between the date of death and when they sell, if ever.

Musk, moreover, may have reason to pare down his Tesla holdings unrelated to the Twitter vote. For one thing, Tesla shares are riding at record levels just now, so it might make sense for him to cash out at least some of them while the getting is good. Further, he actually does face what looks like an inescapable tax bill next year, when Musk exercises the options on 73.5 million shares.

At current prices, Musk’s gain on the exercise would come to more than $20 billion. At the top federal and California income tax rates, or 54.1%, he would owe about $11 billion. Selling 10% of even the 170.5 million shares he has in hand now, pre-exercise, would bring him more than $20 billion, more than enough to cover the looming tax bill and perhaps even to pay down some of his existing debt.

By pretending that his stock sales were mandated by his Twitter voters, Musk forestalls any speculation that they reflect his doubts about Tesla’s future or about its stratospheric stock market valuation. Tesla shares have fallen by more than 3% as of trading Monday midday, presumably because of the poll result, but they might have fallen even further if Musk’s stock sales came out of the blue.

What does Musk’s latest Twitter escapade tell us about the thinking of the world’s richest individual? Bloomberg has reported that Musk is “known for his tongue-in-cheek tweets.” That’s an extremely indulgent way of putting it.

One 2018 tweet, in which Musk claimed to have secured the financing to take Tesla private, resulted in a $40-million fine from the Securities and Exchange Commission, split between Musk and the company, as well as an order that Musk step down from Tesla’s chairmanship.

Other tweets fall into the categories of infantile and allegedly libelous. Just last week, Musk replied to Wyden’s criticism of his Twitter poll with an obscenely insulting tweet. (Trigger warning: Not safe for work.)

Musk’s Twitter-based campaign against Wyden’s tax proposal reflects how he has used social media to protect the privilege of wealth. Last month, after David Beasley, director of the United Nations’ World Food Program, urged the world’s billionaires to “step up” to address world hunger, noting on CNN that $6 billion, or about 2% of Musk’s fortune, could “help 42 million people that are literally going to die if we don’t reach them,” Musk tweeted a snarky reply.

“If WFP can describe on this Twitter thread exactly how $6B will solve world hunger, I will sell Tesla stock right now and do it,” he wrote. Beasley offered to fly anywhere to meet with Musk to explain. There are no indications that Musk accepted the offer or that any such meeting is in the offing.

Proposals to address hunger by applying even 1% of the estimated $13.2 trillion in the hands of the world’s 2,755 billionaires are hardly unknown. They just don’t lend themselves to explanations on Twitter. Beasley subsequently sent Musk a “snapshot” of WFP’s case. All that’s missing is the money.

Musk’s exchange with Beasley pointed to an important question posed by the unprecedented concentration of wealth in America and the world today: Do we really want solutions to pressing social problems left to the whims of a tiny handful of ultrawealthy individuals like Musk? To ask the question is to answer it.

Musk was waging war with Wyden’s tax proposal before staging his Twitter poll. He asserted that it was merely the precursor to applying the principle of taxing unrealized capital gains to everyone: “Eventually, they run out of other people’s money and then they come for you,” he tweeted Oct. 25.

There’s no evidence that any such idea was under consideration — especially given the reluctance of Democrats alike to raise taxes on the middle class, however it’s defined.

No, the billionaires tax was aimed exactly where the label indicated, at America’s ever-fattened billionaire class. No one is more adept at evading taxes than the 1%, or at achieving changes in the tax code that benefit them legally.

Musk’s pretense that taxing his majestic wealth will lead to higher taxes on ordinary Americans is just so much bluster. He’s protecting his own wealth, don’t think otherwise. His willingness to manipulate public sentiment to keep his own pockets filled is the best proof that a billionaires tax is desperately needed.