Column: The cereal box shows berries. There are no berries within. How is this legal?

Homepage News Column: The cereal box shows berries. There are no berries within. How is this legal?
News

Column: The cereal box shows berries. There are no berries within. How is this legal? 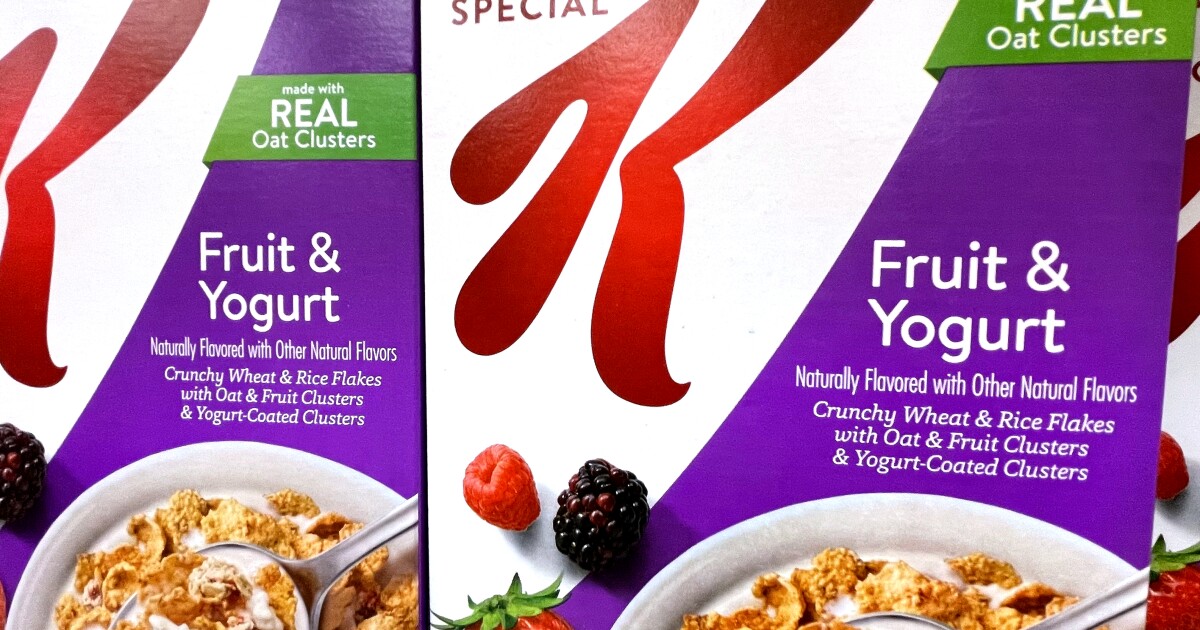 I listened over the phone as Tom Budlong dumped a box of Kellogg’s Special K Fruit & Yogurt cereal onto the counter of his West Los Angeles home.

Is it a berry?

“It looks like a piece of berry.” He popped the small red thing into his mouth. “It’s sweet. I suppose it tastes like a berry.”

But it wasn’t a berry.

Budlong had contacted me earlier in the day with a consumer issue that at first appeared trivial but, the closer you looked, the more it raised intriguing questions about product marketing and truth in advertising.

He’d been sitting in his kitchen enjoying a bowl of Special K Fruit & Yogurt and, as one does, gazing at the cereal box as he ate.

It showed a spoon being lifted from a bowl. The spoon holds crunchy-looking flakes accompanied by white clusters and little bits of red.

Prominently featured beside the bowl are a juicy-looking strawberry, raspberry and blackberry.

Budlong, 84, a retired engineer, turned the box around so he could read the ingredients. They are, as per the box:

In case you didn’t notice, the word “berry” doesn’t appear.

There are no strawberries. No raspberries. No blackberries. The only fruit listed is dried apples, which aren’t even depicted on the box.

Being the sort of fellow who can’t leave a problem unsolved, Budlong called Michigan-based Kellogg and reached a service rep. He explained why he was phoning.

The service rep, Budlong told me afterward, explained that even though Special K Fruit & Yogurt contains no strawberries, raspberries or blackberries, “they’re on the box to show that natural flavors were used.”

This didn’t sit well with Budlong, which is why he reached out to me.

“You assume from the box that this stuff is in there,” he said. “You expect there are going to be berries.”

I could hear his consternation as we spoke.

“As far as I’m concerned, this is a form of fraud,” Budlong declared. “It’s visual fraud.”

I looked at an image of the cereal box online and asked about the red bits depicted in the spoon. That’s when Budlong dumped his cereal onto the counter and took a closer look.

The red bits, as best as he could tell, were the dried apple, tinted with food coloring to look like berries.

Thomas Gremillion, director of food policy for the Consumer Federation of America, concluded the same when we spoke later.

“It’s technically true that there’s fruit in there,” he told me, “but it’s not berries. It’s dyed pieces of dried apple.”

The federal Fair Packaging and Labeling Act, enacted in 1967, prohibits “consumer deception … with respect to descriptions of ingredients.”

This is just one of several laws employed by the Federal Trade Commission to protect consumers from false or misleading advertising and marketing.

An FTC spokesperson declined to comment on the Kellogg packaging.

The Food and Drug Administration has its own rules for food and beverage packages, with highly specific regulations for how ingredients are presented.

An FDA spokesperson, asking that her name be withheld, declined to comment on Kellogg’s cereal packaging. But she said that “a food that contains no berries can feature berries on the package if it contains berry flavoring.”

The spokesperson said such packaging “may not be misleading” as long as the imagery suggests the product’s “primary recognizable flavors.”

Lisa Mankofsky, litigation director for the Center for Science in the Public Interest, called this a loophole in federal truth-in-advertising rules.

“It turns out it’s OK to have images on a food product if they convey the product’s flavor profile,” she told me. “In this case, if there’s some kind of flavoring related to berries, you can depict berries.”

No one at Kellogg responded to my repeated requests for comment. (Maybe the company is focusing instead on lawsuits alleging it has more dried apples than strawberries in its strawberry Pop-Tarts.)

“We find these kinds of things to be problematic,” Mankofsky said of the Special K cereal box. “It’s clearly misleading. But it’s probably in compliance with regulations.”

If you’ve stuck with me this far, you undoubtedly recognize why I found a trivial-seeming issue involving breakfast cereal to be indicative of larger concerns about product marketing.

To my mind, the packaging of Special K Fruit & Yogurt cereal — and perhaps many other foods and beverages — tricks consumers into thinking they’re buying something that they’re not.

What can be done? A New Jersey congressman, Democratic Rep. Frank Pallone Jr., has introduced a bill that would, among other things, require that images of fruits and vegetables on packaging correspond with actual ingredients.

If passed, the Food Label Modernization Act would be the most sweeping overhaul of food labeling regulations in 30 years.

“American consumers have a right to know what’s in the food they and their families eat, but that isn’t always easy with today’s opaque food labels and marketing claims,” Pallone said in a statement.

It’s about time. Unless you think it’s perfectly fine for a cereal that contains no berries to market itself as bursting with berries.