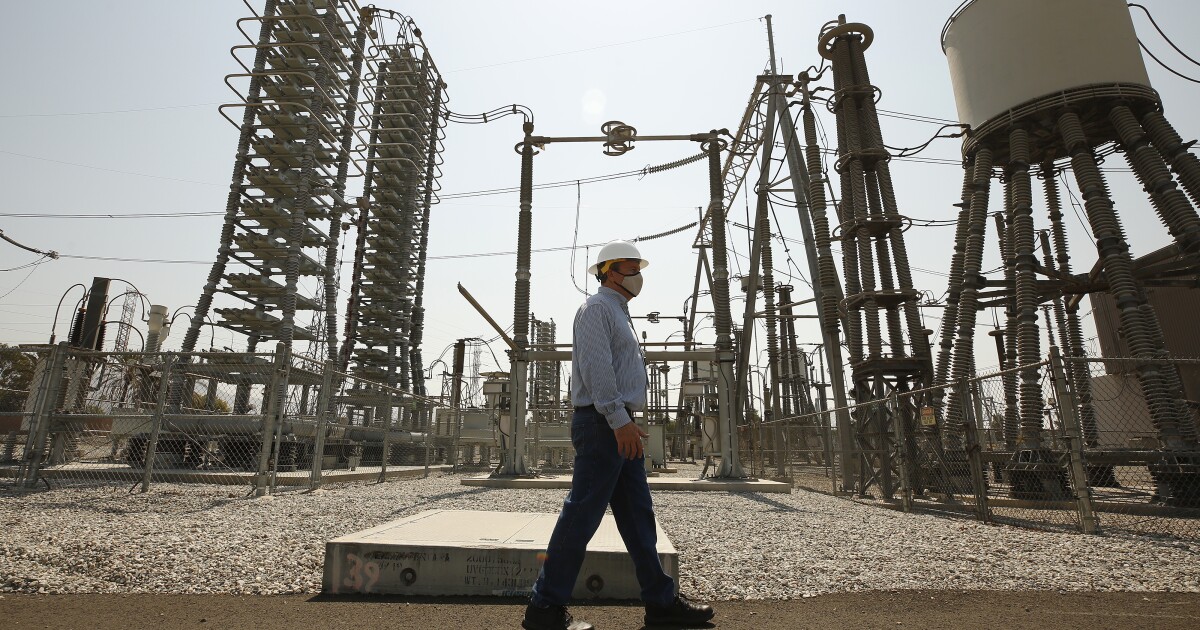 Most people probably think they know how to define “infrastructure”: Roads, bridges, school buildings, maybe (this being the 21st century) even broadband networks.

The $1.2-trillion infrastructure package just signed by President Biden shows that the term needs updating. The measure does provide billions for those traditional purposes, as well as other enhancements to our physical surroundings.

But it broadens the definition of infrastructure to include means to combat global warming, to strengthen labor laws and privacy protections, to prepare for the next pandemic (or pandemics), and to stop tax cheating by wealthy Americans.

One can see that the bill transforms the very concept of infrastructure into a social structure. That’s long overdue.

As the largest state, California stands to gain the largest share of much of this spending, based partially on statutory formulas. The White House says California should expect $25.3 billion for highways and $4.2 billion for bridge replacement and repairs over five years. The state can also bid for money from the $28.5-billion investment fund for economically significant bridges and other physical projects.

The state should also expect $9.45 billion for public transportation and $384 million to expand an electric vehicle charging station network statewide. California will receive a minimum of $100 million to expand broadband access. Another $124 million will be available for protection from wildfires and cyberattacks such as ransomware.

Since poring single-handedly through 2,135 pages of legislative verbiage can be a chore, to say the least, I’ve looked over the shoulders of colleagues and experts such as Lydia DePillis of ProPublica, Charles Gaba of ACAsignups.net, Peter Gleick of the Pacific Institute and others who have spent days mining the measure for the most important nuggets of gold.

A couple of general observations to start. Although not a few worthwhile projects fell away before the final version was passed and signed, the result is spectacular. The last administration never took infrastructure building seriously.

To Donald Trump, it was just another catchphrase, so it’s hardly surprising that it turned into a joke. No infrastructure program ever emerged from the Trump White House during its four years.

For Biden to have delivered a package of unprecedented scale just 10 months into his term is a major achievement by any measure; for him to have done so by securing the votes of 13 House Republicans, who broke from their party’s wholly destructive policy of simply voting “no” on anything proposed by a Democratic president, makes it even more remarkable.

That said, the Democratic Party now faces the task of communicating to voters how much it has done for them. As I wrote following last week’s disillusioning election, “messaging” is something that Democrats have been atrocious at. Now that they have something to brag about, they better get their bragging skills up to snuff.

Biden and his Cabinet members are embarking on a nationwide tour to do so. That’s a good start, but they’ll have to carry it through to the next election, and the one after that.

Another point, concerning math. Although the bill is described as a $1.2-trillion measure, it actually encompasses $550 billion in new spending — that is, allocations beyond what Congress was already planning to spend.

That sum, moreover, is to be expended over five years, making the average cost of new spending $110 billion a year, or a bit over 2.5% more than federal spending in 2019. Conservatives’ claims that this bill will break the bank are plainly hogwash.

Now to the details.

The totals in this category are hard to calculate, because the spending is distributed among several sections and subsections. But estimates based on White House fact sheets place the total to be spent on roads and bridges at $110 billion, plus $66 billion for passenger and freight rail, $39 billion for public transit, $25 billion for airports, $65 billion for broadband and $65 billion to upgrade the national power grid.

There’s also $9.75 billion for bus and light rail service in low-income neighborhoods, $6.5 billion for affordable housing, and $5 billion for the Commerce Department to harden the domestic end of the supply chain, especially for drugs and other critically needed goods, some of which have been in short supply because of manufacturing interruptions and logjams at the ports.

The environment and global warming

The bill allocates $3 billion to replace gas-fueled heavy vehicles with electric vehicles, and $3.5 billion to reduce air pollution around ports — plainly a major concern for Southern California, where neighborhoods adjoining the ports of Los Angeles and Long Beach have suffered from noxious emissions from vessels, trucks and railroads for decades.

There’s $5 billion for the Environmental Protection Agency to hold corporations to their stated claims to reduce pollution from their operations. In a sharp departure from Republican doctrine, the bill allocates $365 million to NASA for research in Earth science, meaning global warming.

Conservatives worked assiduously during the Trump years to emasculate NASA’s crucial work in this area, arguing that the agency should concentrate solely on space exploration. This was merely part of the Trump ethos of undermining any research that might harm Republican patrons in the fossil fuel industry. The infrastructure bill turns that back around.

The bill also bans oil and gas drilling in sensitive regions. Those include federal waters off the Atlantic and Pacific coasts, which should be of special interest here in Southern California, given our recent experience with an oil spill from an underwater offshore pipeline.

It also reverses one of Trump’s most egregious environmental assaults, the opening of the treasured Alaska National Wildlife Refuge to oil and gas drilling. The infrastructure bill cancels any existing drilling leases and orders any payments made by the lessees to be returned to them within 30 days.

In broader scientific terms, the bill provides $1.95 billion to the National Science Foundation for new research grants, making good on Biden’s promise that his administration would honor science, not disdain it like his predecessor.

As we’ve mentioned before, this bill gives the National Labor Relations Board authority, for the first time, to levy monetary penalties on businesses found to have engaged in unfair labor practices — generally by interfering with union organizing or negotiating.

Previously, the NLRB could only order businesses to knock it off. Now it can levy penalties of up to $50,000 per violation of labor law, and $100,000 on repeat violators.

The measure grants $1 billion to upgrade the antitrust enforcement capabilities of the Department of Justice and Federal Trade Commission, to be split evenly between the two agencies. It grants $500 million to the Internal Revenue Service to combat tax evasion, which is chiefly a problem among rich Americans. And $500 million to create a privacy bureau at the FTC.

This may be the area in which “infrastructure” is defined most in social terms. The bill caps out-of-pocket costs for insulin at $35 for a 30-day supply. It mandates that new mothers receiving Medicaid can’t be denied benefits for 12 months after they give birth.

The bill provides $90 million for training professionals in palliative and hospice care, filling a gap in the American healthcare system that is certain to become more burdensome as the nation’s population ages.

There’s $1.4 billion to modernize state and local public health agencies and help them meet biosafety and biosecurity needs, and $1.3 billion for pandemic preparedness, including the production and stockpiling of tests, vaccines, syringes and personal protective equipment for healthcare professionals and first responders.

The bill allocates $2 million for the National Health Service Corps and $500 million for the Nurse Corps, two services aimed at providing healthcare services in underserved — read low-income and rural — communities.

Put it together and it becomes evident that infrastructure is no longer properly thought of as bricks and mortar. It’s about improving people’s lives no matter how that happens, and it’s well past time for the change.

Tags: Los Angeles News
Previous Story
Column: Thank you, Elon Musk. You’ve just proved why a billionaires tax is essential
Next Story
Column: There may be a steep privacy cost if you park at this Trader Joe’s