Column: The right’s attack on Fauci shows it has nothing in its policy tank but slogans

Homepage News Column: The right's attack on Fauci shows it has nothing in its policy tank but slogans
News

Column: The right’s attack on Fauci shows it has nothing in its policy tank but slogans 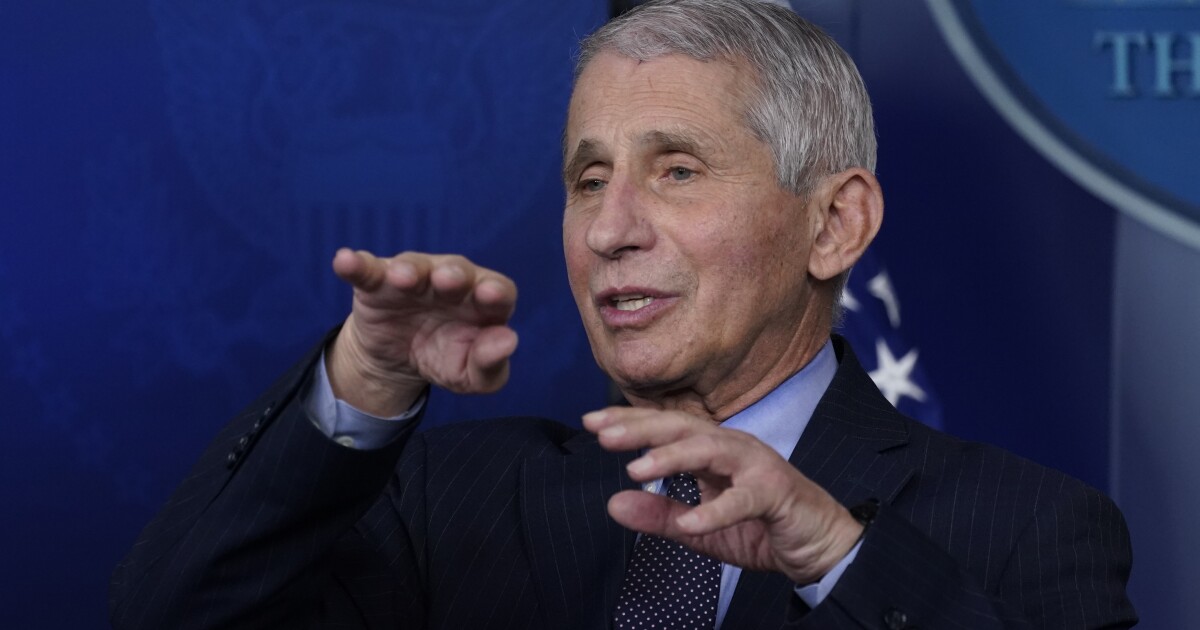 All politicians appreciate the power of a symbol, a slogan or a mantra.

That must account for the right wing’s transformation of the name of Anthony S. Fauci, America’s best-known and most respected immunologist, into an all-purpose swear word.

The right wing has tried to make Fauci, 80, the face of a supposed campaign to absolve China from responsibility for ushering the virus that causes COVID-19 into the world, which is known as the “lab leak hypothesis.”

Tucker Carlson of Fox News alleges Fauci lied to the public to protect a virus lab in Wuhan, China, and has mocked him via graphics on his show as “Lord Fauci, Patron Saint of Wuhan.”

Republican officeholders have called for Fauci, head of the National Institute of Allergy and Infectious Diseases, to be fired or subjected to criminal prosecution.

They accuse him of being complicit in the alleged release or escape from a Chinese laboratory of the virus causing COVID-19, a “manufactured plague,” according to a letter sent out June 4 by Rep. Marjorie Taylor Greene (R-Ga.) (Greene demanded action against Fauci by the Biden administration by June 31, a date that doesn’t exist on the calendar.)

As I wrote recently, there is no evidence whatsoever that the virus originated or was warehoused in a Chinese lab and was released, either inadvertently or deliberately.

Former President Trump used an attack on Fauci for an applause line during a rally Saturday in Greenville, N.C., calling him “not a great doctor but a great promoter” and asserting “he’s been wrong on almost every issue and he was wrong on Wuhan and the lab also.”

Most recently, Fauci’s critics have picked over a trove of his emails, released to BuzzFeed and the Washington Post via Freedom of Information Act requests, to search for evidence of Fauci’s duplicity in commenting on the pandemic. The emails covered the period from January through June last year.

They assert that the emails prove their point. In fact, they prove nothing of the kind. Instead, they portray a public servant taking pains to be judicious about theories for the origin of the virus and about purported remedies.

Fauci tends to favor the hypothesis that the virus reached humans from animal hosts through natural means rather than from a laboratory accident, much less a deliberate release. But he doesn’t rule out either theory or advocate abandoning one or the other course for further investigation.

That hasn’t stopped those determined to point fingers at the Chinese from bandying Fauci’s name as if it’s a magical incantation. For some audiences, his name has become shorthand for an inchoate doubt about all things COVID-related.

None of this is novel as a political technique. Facts are complicated and often can’t be explicated without nuance. That process bores audiences and glazes people’s eyes. It’s much easier, and effective, to cast nuance aside and bundle every detail of a position into a simple one- or two-word mantra.

Neither side of the political aisle is immune from this temptation, but it certainly seems as if the right has become more adept at employing it.

Republicans rechristened the estate tax as the “death tax,” which concealed from voters the facts that it was levied not on the dead but their heirs and that its effects fell chiefly on the very richest families in America, not the average mom and dad.

Similarly, the Affordable Care Act was repositioned by its enemies as a “government takeover” of healthcare and America’s health insurance companies, which were roundly detested by their customers before the ACA, were newly depicted as sources of healthcare policies that Americans loved and would hate to lose.

Further back in history, the American Medical Assn. defeated President Truman’s effort to remake the healthcare system by labeling it “socialized medicine.”

Indeed, “socialism” has become the all-purpose Republican label for any Democratic-supported government policy, evidently on the assumption that average Americans don’t actually know what socialism is or that the Democratic platform doesn’t resemble it at all; voters only need to think that “socialism” is a bad thing for the label to do its job.

Part of the calculation behind repackaging complex matters as simple slogans is the hope that the media will be fooled into following along. This sometimes happens —”climate change,” a phrase championed by GOP pollster Frank Luntz as a less menacing alternative to “global warming,” has become the quasi-official label for, well, global warming. Luntz also contrived the “death tax” dodge, which hasn’t caught on to the same extent.

Possibly, Fauci’s detractors hope that his name will gain the status of an eponym, a noun formed from the name of an individual, much as the name of Vidkun Quisling, the front man for the Nazi regime during its occupation of Norway, has become synonymous with “traitor.”

It’s proper to take a close look at what Fauci is specifically accused of. In the most general terms, he’s being painted as the villain in the U.S. response to the coronavirus. Americans’ doubts about the pandemic include questions about the deadliness of the virus, the efficacy of countermeasures such as masks or anti-malarial pills, and where the virus came from.

Professional scientists’ views on many of these issues evolved over the last 18 months, and as a professional scientist, so did Fauci’s. The attack line that he was “wrong” in the past for advising against widespread mask wearing or doubting the scale of the pandemic’s threat merely shows that he was open to new information about a virus about which we knew almost nothing at the outset but learned quickly.

As knowledge grew, Fauci’s views changed; what didn’t change was his willingness to admit that he was learning something new every day and to adjust his conclusions to the facts at hand. Since he was placed front and center as the spokesman for sober science as the pandemic unfolded, perhaps it was inevitable that he would be used to symbolize doubts about the pandemic too.

More recently, however, this process has taken a distinctly sinister turn. The right wing now accuses him of having participated in the funding of so-called gain-of-function research at the Chinese government lab in Wuhan. The big promoter of this febrile theme is Sen. Rand Paul (R-Tenn.) who engaged in a notable diatribe against Fauci during a May 11 Senate subcommittee hearing at which Fauci flatly denied that the government had funded that research.

For Paul’s purposes, the term gain-of-function is useful because the vast majority of laypersons have no idea what it means, so Paul can invest it with all the ominous significance he wishes. (In fact, it’s a common technique in virological and vaccine research.)

As I wrote recently, the goal of promoters of the lab-leak theory such as Paul, Sen. Tom Cotton (R-Ark.) and Trump is political, not scientific. By placing the blame on China, they hope to distract the public from Trump’s abject failure in managing the pandemic to the extent of more than 350,000 U.S. deaths from the virus in 2020. Fauci is an obstacle to this effort because like other experts he believes the probability of a lab leak to be well below that of a natural source.

They also hope to distract from the Biden administration’s success in combating the pandemic by accusing the White House of being in cahoots with Fauci. For that to matter, Fauci’s reputation must be smeared.

Whatever the goal, the fundamental truth is that neither Fauci nor any other virological authority is opposed to investigating the source of the virus, and no one places the probability of a lab leak at 0%. The issue is important because policy choices to avoid new pandemics in the future depend closely on the answer — if it’s a lab, then the security of virological research labs needs to be stepped up; if it’s animals in the natural environment, then animal-human contacts need to be better monitored and managed.

But the attacks on Fauci have nothing to do with anything resembling responsible scientific inquiry. They’re a partisan sideshow. Luckily, the Biden White House seems at this date to be fully alive to that aspect of the campaign. Biden was asked at a June 4 news conference in Delaware literally as he was walking out the door, “Mr. President, are you confident in Dr. Fauci?” Biden thought the question so important that he stuck his head back through the door to say, “Yes, I’m very confident in Dr. Fauci.”

“Can you imagine any circumstance where President Biden would ever fire him?” he asked.

Without a moment’s hesitation, she replied, “No.”