Column: This solar company wouldn’t let a dead woman out of her contract

Homepage News Column: This solar company wouldn't let a dead woman out of her contract
News

Column: This solar company wouldn’t let a dead woman out of her contract 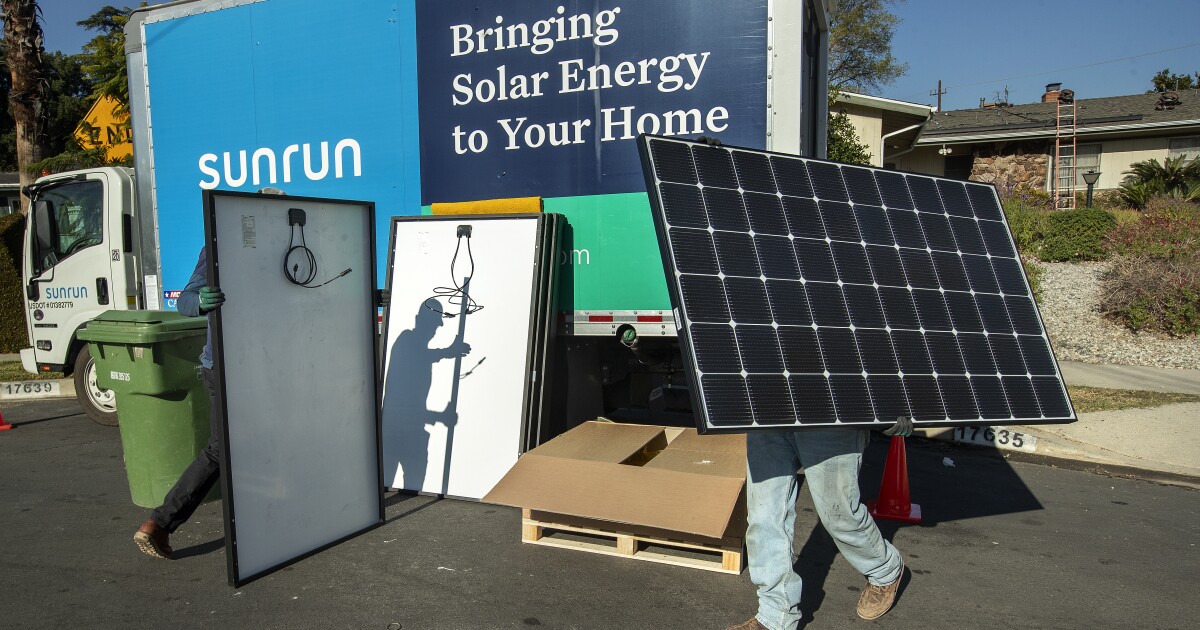 Worthwhile products sell themselves. So it’s always been strange to me that some companies selling solar power systems resort to the skeeviest sales practices imaginable — telemarketing, robocalls, hyper-aggressive salespeople.

Solar power is a good thing. It’s part of the solution to climate change.

Yet some players in this industry go out of their way to come off as disreputable. Just the other day, a solar salesman I encountered while walking my dog wouldn’t take no for an answer, trying three times to get me to stop and hear his pitch.

But the following story really takes the cake.

Brigid de Jong’s mother-in-law, Ruby, died in late October at the age of 91. De Jong’s husband stopped by his mom’s house near Fresno about a week later to put things in order. That’s when he noticed solar panels had been installed on the roof.

The work clearly had been done recently. The system wasn’t even hooked up yet.

“We talked with her every day before her death,” De Jong, 67, told me. “She never mentioned getting solar.”

She and her husband looked into things and discovered a contract that Ruby apparently had signed online in September.

“This was strange because she was not computer savvy at all,” De Jong said. “And the email address on the contract wasn’t hers. It was a Gmail account. She had an AT&T email address.”

De Jong contacted the solar company, Vivint Solar, which was acquired by San Francisco’s Sunrun last October. She explained the situation and asked that the contract be canceled and that Vivint remove its equipment from the house.

That was five months ago. Since then, Vivint has been giving De Jong the runaround and repeatedly asking whether she planned to sell the house to someone who may be interested in solar power.

“It is absurd that getting the solar panels installed was a matter of a few weeks but having them removed is taking months and months,” an exasperated De Jong emailed the company.

Vivint finally informed her that the company’s “review committee” had determined that “we are unable to move forward with the cancellation of the contract.”

Let’s be real clear about what that meant. Vivint sold a 25-year contract to a 91-year-old woman. And then, after the woman’s death a few weeks later, the company said it wouldn’t drop her as a customer and wouldn’t remove the solar panels.

Vivint (now Sunrun) is no stranger to customer dissatisfaction. A 2017 report by the Campaign for Accountability found that more than half of all complaints about solar companies received by the Federal Trade Commission involved Vivint and rival SolarCity.

“Among other things,” the report found, “consumers reported poor customer service and being tricked into buying solar panels.”

It said cracking down on solar companies “is all the more urgent” in light of Sunrun’s acquisition of Vivint. Both companies, it said, “have track records of deceptive marketing.”

Vivint’s 25-year contract with De Jong’s mother-in-law stipulated that she would pay Vivint 18.5 cents per kilowatt-hour for all power generated by the solar panels on her roof, with her rate rising by 3% every year.

Is that a good deal? No, it turns out. Not even close.

According to PG&E, the utility serving Ruby’s home, the average cost for electricity for the company’s customers as of March 31 was 28.3 cents per kilowatt-hour.

However, De Jong said her mother-in-law was enrolled in California Alternate Rates for Energy, a state program that provides low-income people with monthly discounts of as much as 35% off their utility bills.

PG&E told me the average power cost for its CARE customers is 17.7 cents per kilowatt-hour.

Not only is that less than the 18.5 cents quoted by Vivint, but the company’s 3% annual rate hikes all but guaranteed its price would consistently surpass what a CARE member should pay.

“PG&E believes it’s more important than ever for customers to know the right things to ask and research when considering solar,” said Ari Vanrenen, a spokeswoman for the utility.

In any case, I’m pleased to say that shortly after I contacted Sunrun about all this, a company exec phoned De Jong to say the contract would be canceled.

“They made it seem like they were doing it out of the goodness of their heart,” De Jong said.

Wyatt Semanek, a Sunrun spokesman, conveyed much the same to me.

“Our human-centered philosophy has inspired us to take another look at this case, which came to us as part of the Sunrun acquisition of Vivint Solar,” he said.

“Considering the unique set of circumstances, Sunrun has determined that this account warrants a full-system cancellation.”

Sunrun’s human-centered philosophy notwithstanding, the company left many questions unanswered.

Why was an unknown email address on the contract? Why did it take months to resolve this? What was Sunrun hoping to gain by holding a dead person to her contractual obligation to purchase overpriced electricity?

Semanek didn’t address any of those questions directly. “This isolated case is the result of human error,” he said without elaborating.

“When Sunrun reviewed Ms. De Jong’s case, we recognized mistakes that had been previously overlooked and promptly moved to engage with her family and cancel the existing contract,” he said.

I suspect most of us would agree that explicitly refusing to cancel the contract for five months hardly counts as “promptly.”

Sunrun subsequently told De Jong she could keep the solar panels on the house for free. Semanek said any buyer of the house would be able to contract with Sunrun for solar service at no additional cost.

De Jong told me she was glad to have this mess behind her. “I still can’t believe it happened,” she said.

I’ll conclude by making the same point I started with: Good products sell themselves. They don’t require trickery.

Some companies in the solar business, however, seem to think they need to bamboozle people into buying their products.

They bring darkness to something that should be full of light.