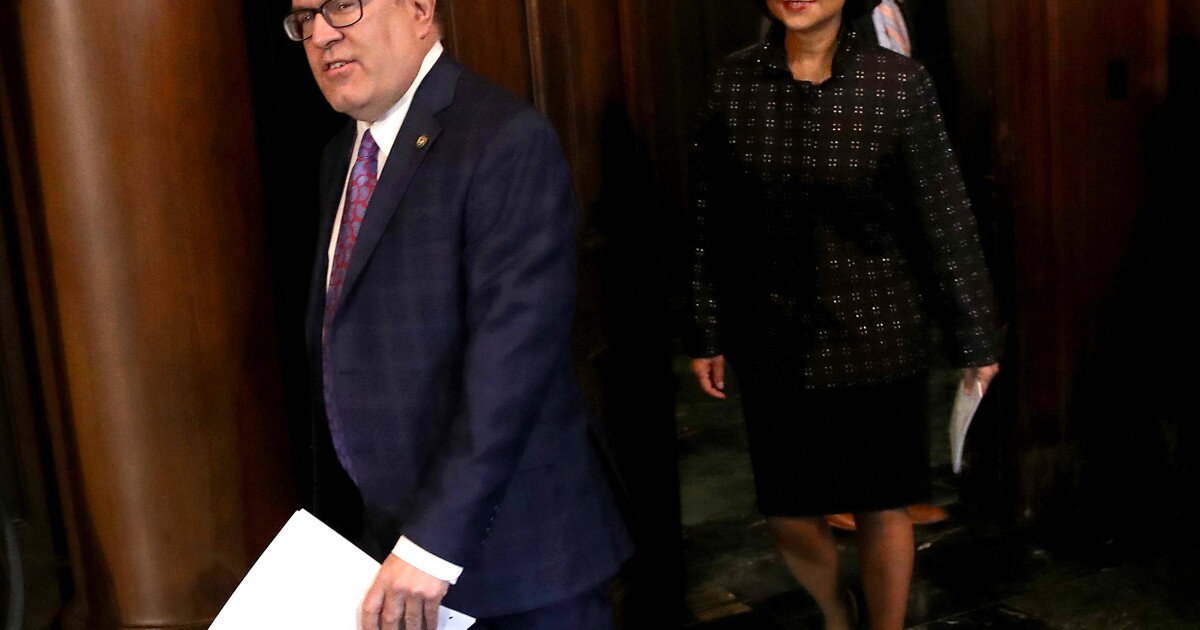 The Trump administration’s rollback of auto emission standards was one of the most overt examples of its anti-science agenda.

Now we know how bad things really were: The administration deliberately locked Environmental Protection Agency scientists out of the rulemaking process.

That’s the finding of a report by the EPA’s inspector general published Tuesday.

According to the report, the rollback was publicly presented as a joint product of the EPA and the National Highway Traffic Safety Administration when it was formally announced in 2020.

“I told them what I’m going to do for you is go out and tell the truth, so that the public knows that this rollback is not being done by EPA staff, it is being done by other people in the government.”

Former EPA expert Jeff Alson, on what he told colleagues as he left the agency

In fact, however, the administration had relegated the EPA’s scientists and technical personnel “to the role of after-the-fact reviewers more so than real-time partners” in crafting the emission rules.

NHTSA is an agency of the Transportation Department, whose secretary at the time, Elaine Chao, typically announced Trump policies on emission and mileage standards standing side-by-side with then-EPA Administrator Andrew Wheeler.

As a result, the new standards were developed without expert analysis of their impacts on children’s health or environmental justice, among other concerns.

EPA experts weren’t shown the rules that NHTSA was submitting to the White House for formal approval until shortly before they were due for approval, the inspector general’s report says. At that point they were invited to comment on 1,000 pages of text.

“The EPA’s comments noted numerous factual inaccuracies [and] unnecessary denigration of the EPA’s work,” the report says. At least some corrections to the rule text were made.

Sidelining the EPA was a sharp departure from prior practice, in which pollution standards were developed collaboratively.

That had been the case in 2010 and 2012, when the EPA and NHTSA jointly developed standards for vehicular emissions and greenhouse gases, calling for 5% reductions in emissions annually in the 2022-2025 auto model years.

The Trump administration’s effort to roll back Obama-era auto emission and mileage standards took aim specifically at California’s stringent regulations, which were followed by a dozen other states and therefore had become almost a de facto industry standard.

California had long held a waiver from federal rules as long as its own regulations were more stringent. The Trump administration also launched an effort to revoke California’s waiver. The state is challenging that effort in court.

The regulations established under the Obama administration called for average vehicular fuel efficiency of 54.5 miles per gallon by 2025, applicable to model year 2017 and beyond. The Trump administration’s plan froze the auto mileage standard at the 2020 level, which is only 36.9 mpg.

The rulemaking drove a wedge among leading automakers, some of which didn’t welcome the legal and manufacturing uncertainties the policy was certain to create.

Honda was correct. The technical underpinning of the Trump rollback was shown up as half-baked from the start, its supposed scientific foundations debunked by 11 experts at leading universities, including UC San Diego, UC Davis and Berkeley, USC, Yale and MIT.

The weakness of the administrative rationale spurred lawsuits filed by 22 states, the District of Columbia, the cities of New York and Los Angeles and several environmental groups.

In the face of the Trump effort, California cut its own deals with Ford, Honda, Volkswagen and BMW of North America, which account for nearly one-third of auto sales in the United States. The contract the state announced in 2019 requires those companies to meet a standard of about 50 miles per gallon by 2026.

California, in other words, gave up some of its regulatory rigor, but won legally binding commitments in return. But General Motors, Fiat Chrysler and Toyota, along with a host of smaller foreign manufacturers, threw in their lot with Trump, backing him in his legal battle with California.

After the 2020 election, when it became clear that President Biden would move to revoke the Trump standards, some of those automakers had second thoughts. GM, notably, abandoned its support of Trump and said it was “inviting other automakers to join us.”

The sidelining of EPA experts in the emission rulemaking was part and parcel of Trump’s general policy of disregarding, even contradicting, scientific expertise. This approach struck particularly hard at the EPA, which had prided itself as the repository of responsible science on climate change.

During his 2016 presidential campaign, Trump had derided climate change as a “hoax” and pledged to reduce the EPA to “little tidbits.”

EPA staff members tried to resist the tide of ignorance and hostility flowing from the top, but it was a dispiriting period. Jeff Alson, an engineer at the EPA’s vehicles lab in Ann Arbor, Mich., left the agency in 2018 after a 40-year career. He recalled last year for Inside Climate News that he tried to give a pep talk to the colleagues he was leaving behind.

“I told them what I’m going to do for you is go out and tell the truth, so that the public knows that this rollback is not being done by EPA staff, it is being done by other people in the government,” he said.

Although Trump is out of the White House and Biden has reintroduced scientific standards to government programs, Trump’s vandalism of anti-pollution rules remains a problem for Biden. The White House says it is working to remove Trump’s thumb from the auto emission and mileage standards, but that process may take months.