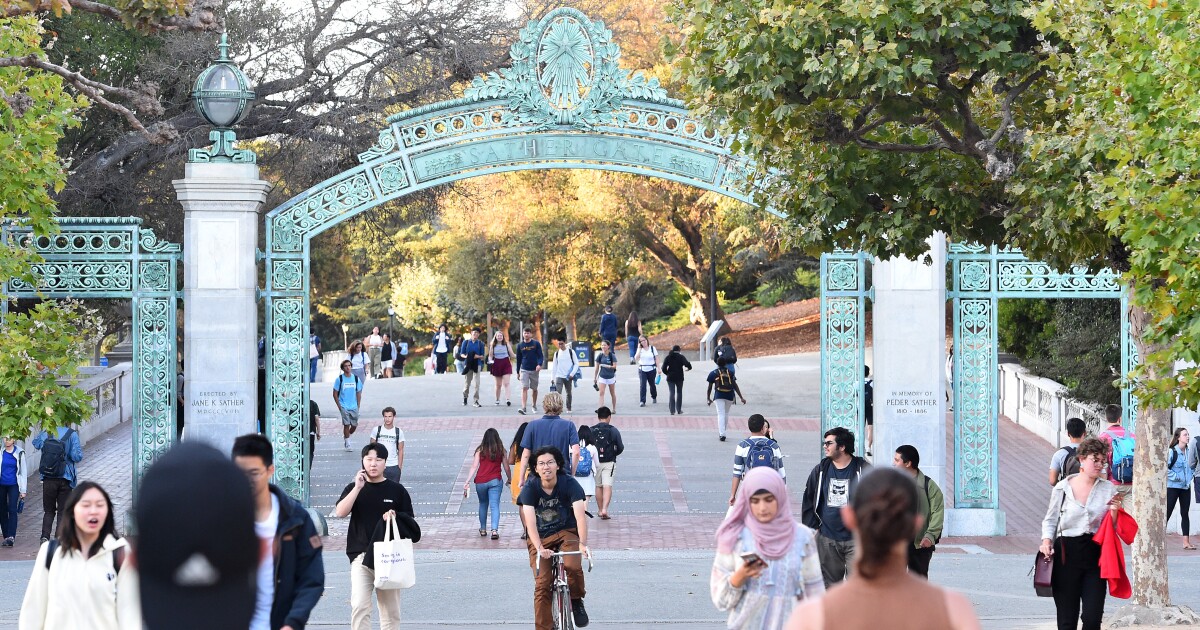 The University of California is declaring victory in its long battle with the world’s largest publisher of scientific, technical and professional journals.

UC announced Tuesday a new four-year deal with Netherlands-based Elsevier that will make all research published by UC authors in some 2,500 Elsevier journals subject to the open-access publishing model.

That’s a model in which researchers pay a fee to publish their papers in the journals, but the papers are made available to readers for free and without journal subscriptions.

We remained focused on our long-term goals, and standing by them was a path to success in these negotiations.

By forging an accord between two scientific behemoths, the deal is perhaps the most important leap forward in the open-access movement. The university says it generates nearly 10% of all published research in the United States.

That has made it a significant partner of Elsevier, which has published about 18% of all UC output. The partnership frayed, however, due to the conflict over the two parties’ differences over scientific publishing models.

Both goals were hampered by the near-monopolization of academic publishing by for-profit companies that took root in the 1960s. The publishers paid nothing for research funded publicly, then placed the research behind paywalls and ramped up subscription charges steeply, straining university budgets.

“We’re a public institution, and almost all of the research done by our scholars is funded by taxpayer dollars,” says Jeff MacKie-Mason, the university librarian and co-chair of UC’s negotiating team. “We’re doing this to make the results of that research available to the people who are paying for it rather than making them pay again to read it.”

The deal came after more than two years of brinksmanship between UC and Elsevier that involved UC’s dropping its subscriptions to Elsevier publications at the end of 2018, a point when the two sides seemed to have reached an impasse. It also follows a similar deal UC reached last June with Springer Nature, the second-largest scientific publisher.

Elsevier’s reluctance to yield on UC’s demand to move to 100% open access wasn’t surprising, given the success of its prevailing model: Its operating profit — that is, that of the scientific, technical and medical publishing arm of its Netherlands parent, Relx — came to $1.4 billion in 2020 on revenue of $3.74 billion.

“We remained focused on our long-term goals, and standing by them was a path to success in these negotiations,” says Ivy Anderson, the associate executive director of UC’s California Digital Library and co-chair of the negotiating team.

Although Elsevier has reached open-access agreements with other research institutions, this is the largest and farthest-reaching of its kind.

“This is something of a landmark for us,” Gemma Hersh, a senior vice president at Elsevier, told me. “It really reflects the journey we’ve been on with our customers over the last two years.”

The agreement announced Tuesday kicks in on April 1 and is valued at about $13 million. That’s about what the university expected to pay if it simply renewed the former Elsevier agreement in 2018. But UC estimates that it’s an effective 7% reduction in costs, given inflation in the intervening two years.

The sum is an estimate of what the university will pay in publication charges, which average about $3,000 per paper; historically, UC has provided about 4,700 papers to Elsevier journals per year.

Several of Elsevier’s highest-profile journals — including the Lancet, a British medical journal, and biomedical publications of Cell Press — charge as much as three times as much.

The Lancet and Cell Press publications will be made subject to the Elsevier agreement over the next two years. The agreement means that UC effectively obtains access rights to Elsevier’s journals for free.

UC researchers will retain the right to opt out of the open-access terms. But MacKie-Mason and Anderson expect the majority of UC scholars to publish via open access. Major research funding sources, including U.S. government agencies, allow publication charges to be paid out of research grants, and UC will cover those fees for researchers without grants.

We’ve chronicled UC’s more than two-year battle with Elsevier at length, but a recap would be useful to show how far the publisher has come in that period.

The battle began in 2018, as the university started negotiating a renewal of its five-year contract for subscriptions to Elsevier’s journals.

UC’s faculty and administration had been committed to open access since 2013, when university policy started requiring UC authors to deposit versions of their papers or links in its eScholarship online repository; by then the repository held more than 200,000 items available to the public for free.

The UC negotiators’ goal was to incorporate open access in a so-called publish-and-read model, through which its subscriptions to the journals would be merged with publishing fees for its scholars’ papers in a single deal, hopefully at a money-saving rate.

UC subscription costs were then about $11 million, and it estimated that the university and its authors were paying Elsevier about $1 million a year in publication fees.

Elsevier had no interest in such a deal, MacKie-Mason told me that December. “They’re the most powerful publisher in the world, and they act like it,” he said. “They’ve been unyielding.”

Elsevier was willing only to test an open-access fee arrangement as a pilot program, but only on a small scale and separately from the subscription contract. The university felt that fell well short of the goal of converting UC’s entire output to open access.

With no agreement reached, UC allowed its subscriptions to lapse at the contract expiration date, Dec. 31, 2018. The publisher allowed scholarly access to continue while it tried to reach a new agreement with the university.

But Elsevier finally pulled the plug on July 10, 2019, cutting off access to papers published after the previous Jan. 1. (Journals published before that date and subject to the prior contract were still accessible.)

MacKie-Mason and Anderson say the cutoff was an inconvenience but not a critical one.

The university had a multitude of other methods to secure legal access to papers that its researchers and students needed, including interlibrary loans, requests to papers’ authors, and downloading of “preprints,” which are non-peer-reviewed versions of papers deposited in public repositories. Individual articles could also be purchased from the journals.

The process sometimes involved delays, but “there was not a single article we could not gain legal access to” during the dispute, MacKie-Mason told me.

Elsevier has said throughout the dispute that it wasn’t averse to the open-access model per se but doubted that it would serve all its customers equally. Moreover, the vast bulk of its published material falls within the old model — 483,000 articles published under the subscription model in 2020, versus 81,000 under open access.

But the ground has been shifting under the publishers’ traditional model. The number of subscription articles has been increasing by about 5% a year since 2010, while open-access articles have increased by an annual average of 55% in the same period.

Journals devoted entirely to open access gained high prestige in the marketplace, including the Public Library of Science, or PLoS, which was founded in 2001 by scientists at Berkeley, Stanford and the National Cancer Institute.

In 2018, a consortium of 11 European research agencies decreed that by 2020 every paper they fund would have to be freely available from the moment of publication, an initiative known as Plan S.

The decree meant that papers would no longer be able to appear in high-profile journals such as Science, Nature or Elsevier’s Cell and Lancet unless their business models changed drastically. After the addition of some flexible features, the plan started being implemented by funding agencies this year.

Public institutions in Germany and Sweden also dropped their Elsevier subscriptions to protest the firm’s resistance to full open access. The National Library of Sweden, which represents more than 80 Swedish universities, research institutions and government agencies, reached an open-access agreement with the publisher in late 2019. German institutions still haven’t reached a deal, however.

Other major publishers have also fallen into line with open access. UC has deals with eight publishers, including the world’s second largest, Springer Nature (though the terms of the open-access arrangement for Nature publications are still being worked out).

Before its contract with Elsevier, the National Library of Sweden had reached agreements with Springer Nature, Wiley, Taylor & Francis, Sage and Oxford University Press, the five largest scientific publishers other than Elsevier.

Another important factor was the pandemic. Research into COVID-19 benefited from an unprecedented dismantling of the paywalls blocking access to scientific research, allowing researchers to access one another’s findings virtually in real time.

Elsevier, Springer and other publishers temporarily dropped their paywalls on coronavirus-related research, though they said the free access would be limited to the duration of the crisis and wouldn’t apply to other published research. Some research was posted publicly by authors as preprints and carried cautionary notices that it hadn’t been vetted by peer reviewers.

The broadening of access turbocharged the spread of knowledge about the novel coronavirus and sped up the process of developing vaccines.

“Making what the public has paid for available for the public to use has been a huge win for society,” MacKie-Mason says.