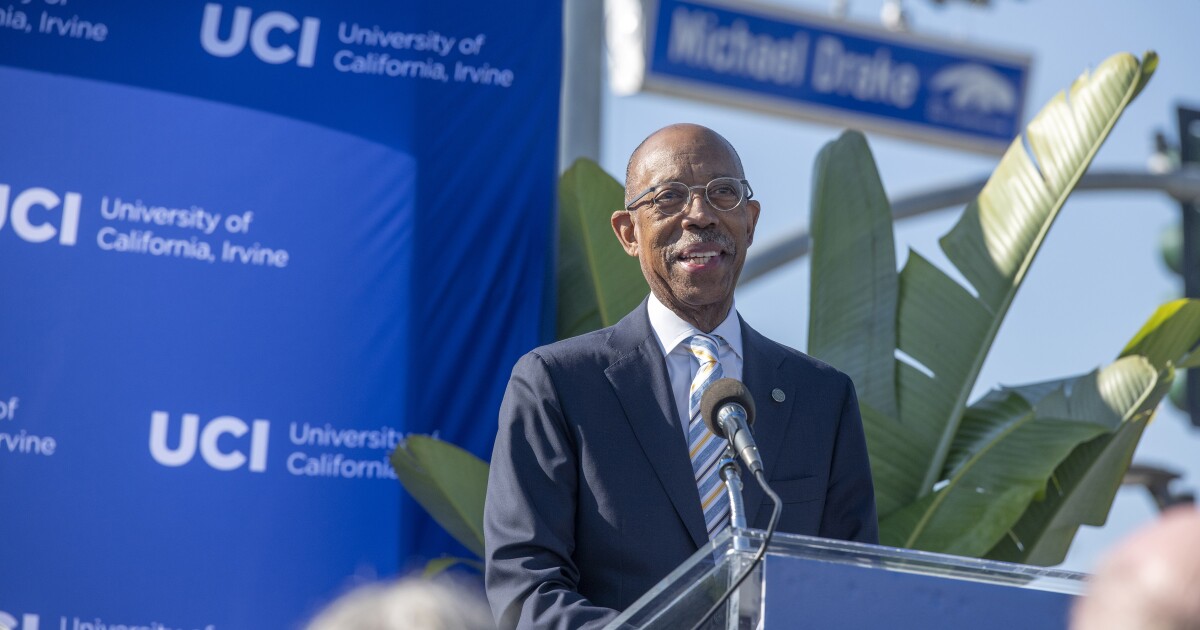 For more than two years, the University of California has grappled with how to manage proposed partnerships between UC medical systems and hospitals that impose restrictions on healthcare on religious grounds.

That process is about to come to an end. On Wednesday, the UC Board of Regents will vote on a policy governing those arrangements.

If the vote goes as expected, it will be a clear win for religious restrictions, especially those imposed by the Catholic Church at hospitals under its control.

Those entities will not compromise on their principles, but we are, even though we are a public university.

That marks it as a devastating defeat for UC values — that is, for the principle that medical decisions should be based entirely on medical and scientific evidence.

In short, it’s almost a complete surrender to the Catholic Church and its goal of shrinking access to healthcare for women and LGBTQ+ patients.

The document on the regents’ agenda was produced by the office of UC President Michael V. Drake, a physician with a degree from UC San Francisco, as a recommendation to the regents.

Although it effectively endorses guidelines that prohibit outside hospitals from interfering with UC professionals’ ability to counsel their patients and prescribe treatments they feel are in the patients’ best interest, Drake’s recommendation fails to ensure that those professionals can perform those treatments at those hospitals. That’s a crucial flaw.

Instead, UC will judge those affiliations acceptable as long as patients can be transferred or referred to other nonrestrictive facilities.

Proposed affiliations will have to “recite the university’s public status, role, and commitment to nondiscrimination” and prohibit requirements that UC personnel or trainees enforce or abide by religious directives. But that’s a low bar; in fact, it provides affiliation partners huge loopholes to interfere with patient care.

Drake’s recommendation, which was posted on the regents’ website Thursday, generally follows the position of UC Health, the university division that oversees the system’s six health centers and 20 health professional schools.

It isn’t entirely clear that the 24-member Board of Regents will accept Drake’s recommendation, but it may be a safe bet. Few regents have taken an explicit stand for or against affiliations with restrictive institutions. Most don’t seem to have devoted much attention to the issue at all, even though it has been percolating since early 2019.

One who has expressed a strong view in opposition to affiliations that subject UC staff members to religious limitations on care is board Chair John A. Pérez, who told me in February that he “could not in good conscience agree to a policy that allows us to continue affiliations with private healthcare operators that limit the delivery of medicine in any way that’s not based on science or the best practice of medicine.”

In a conversation the day before Drake’s recommendation was posted, he reaffirmed that view. He also said that it has been hard to gauge the sentiment on the board because the issue hasn’t been discussed in any depth during public board meetings and state open-meeting laws bar backroom discussions.

“This will be a live-fire activity during the meeting,” he said. Pérez will give up his board chairmanship July 1 and become chair of the board’s health services committee.

UC Health has pushed aggressively to expand partnerships and affiliations with outside healthcare providers, including Catholic hospital chains.

Drake’s recommendation effectively endorses its rationale that these arrangements are crucial for advancing the university’s mission of bringing improved healthcare to underserved communities, including ethnic minorities and rural residents. (UC Health declined to make its director, Dr. Carrie Byington, available for an interview.)

As we’ve reported before, the doctrine is enshrined in a document titled Ethical and Religious Directives for Catholic Health Care Services. It’s a product of the U.S. Conference of Catholic Bishops and is enforced by bishops at the local level.

Contraceptive implantation can’t be done at those facilities, nor can birth-control be dispensed. The directives frown on gender-reassignment surgery, such as that often undergone by transgender people, on grounds that it violates patients’ “bodily and functional integrity.”

(The Catholic Church isn’t the only church that discourages certain medical procedures, but its strictures are the broadest and most absolute, and church-owned hospital chains are the largest sectarian systems in the country.)

Taken together, the ERDs position the church as the dominant partner in any affiliation with a nonsectarian institution, such as UC.

Drake essentially acknowledged that much in an executive summary posted along with his recommendation. He rejected the view of many stakeholders opposed to affiliations with religious organizations that contracts should explicitly state that UC personnel and students are “affirmatively exempted from any restrictions on care that are based in religion.”

However, he added, “because such organizations are not permitted by their sponsors to accept such conditions, that position would amount to an actual ban on those affiliations.”

The issue of affiliations with institutions that restrict care on religious grounds broke into the open in early 2019, when UC San Francisco sought to expand its professional affiliation with four hospitals owned by the Catholic chain Dignity Health. Thanks to an uproar by UCSF personnel, the proposal was abandoned.

As soon became known, other affiliation contracts bound personnel at every UC medical center to sectarian restrictions on care. That not only “defies the university’s commitment to provide treatment based on the best scientific information available,” the UC Academic Senate observed in a May 11 letter to Drake, “it goes against the university’s obligation … not to discriminate against any individuals.’

In his summary, Drake showed he’s aware that this may be the worst time for UC to wave the white flag on healthcare restrictions. He referred to “the decades-long federal assault on evidence-based care” that “have resulted in reduced access to comprehensive healthcare services across the country.”

He acknowledged that the burden of documents such as the ERDs fall disproportionately on “women and members of the LGBTQ+ community.”

Drake expresses “optimism that carefully regulated engagement with covered [that is, religious] organizations will improve healthcare access.” This is hopelessly naive. Anyone who has dealt with institutions subject to the ERDs knows that the rules are becoming more expansive and their enforcement ever stricter. In effect, Drake’s proposal puts Catholic hospitals in the driver’s seat in any relationship with UC.

The ERDs instruct administrators and employees of Catholic institutions not to “manage, carry out, assist in carrying out, [or] make referrals for … immoral procedures.” Does this sound like an organization inclined to see things UC’s way?

“Those entities will not compromise on their principles,” says Vanessa Jacoby, an associate professor in UCSF’s Department of Obstetrics, Gynecology, and Reproductive Sciences and a leader in the campaign to block the school’s affiliation with Dignity Health. “But we are, even though we are a public university.”

Among the shortcomings of Drake’s proposal, professionals say, is its silence on policies at outside hospitals that will implicitly subject UC personnel to religious restrictions.

“They’ll never provide contraceptives,” Jacoby says. “They’ll never do an abortion to our standard of care. I can’t place an IUD at one of those hospitals.”

Consider tubal ligations, a routine sterilization procedure barred by the directives. For women opting for that procedure, Jacoby explains, the safest and most effective time to do it is while they’re undergoing a Caesarian section.

“I’m in the operating room, I’m staring at the fallopian tubes, it is really straightforward,” Jacoby told me. “The only reason I’m unable to do it is because the hospital prohibits it. The patient wants it, she’s consented to it, she’s literally on the table. That is me having to adhere to the religious directives, and that’s exactly the problem.”

Indeed, in a case that just completed trial in San Francisco state court, a Northern California woman sued a Dignity Health hospital for denying her a tubal ligation under exactly those circumstances, requiring her to wait for the desired procedure and undergo a second, more hazardous operation. (The judge in the case is awaiting post-trial briefs.)

Medical professionals say that referrals and transfers aren’t an adequate substitute for giving doctors full latitude to perform procedures they consider appropriate. Patients denied care at some hospitals sometimes fail to follow up on referrals because they’ve been made to feel like second-class citizens.

“Referrals work sometimes, and sometimes they don’t,” says Lori Freedman, a UCSF faculty member studying the experience of patients subjected to religious restrictions on care. “Sometimes they just add stigma and shame to what should be a very normal and healthy part of our healthcare experience.”

Dignity Health, the very organization at the heart of the UCSF controversy, was found by a panel of California appellate judges to have discriminated against a transgender patient named Evan Minton in 2016 when it abruptly canceled his hysterectomy at its Mercy San Juan Medical Center outside Sacramento.

The hysterectomy had been scheduled until Minton mentioned to a Mercy nurse that he was transgender. Dignity Health canceled the operation the next day and cited the Ethical and Religious Directives, which prohibit procedures aimed at treating gender dysphoria.

Hysterectomies are done at Mercy — just not this one, which was refused on religious grounds. (Dignity has asked the U.S. Supreme Court to review the state appeals court’s ruling.)

As one of the leading medical and scientific institutions in the country, UC should long ago have taken a firm stand against religious incursions into medical care. Drake’s solution, however, is for UC to “actively [advocate] with federal and state officials, professional societies, and licensing and accreditation organizations to protect the delivery of evidence-based care.”

Yet if UC is not going to practice what it preaches, who’s going to care what it thinks? Drake’s proposal is a white flag on one of the most pressing medical issues of our time. The regents should grow a collective spine and reject it.

Tags: Los Angeles News
Previous Story
Disneyland reveals which COVID-era changes will stay, which will go
Next Story
Column: Don’t just accept a cut to your credit limit. You can fight back