Column: Why you shouldn’t believe the GOP has suddenly come around on COVID-19 vaccines

Homepage News Column: Why you shouldn't believe the GOP has suddenly come around on COVID-19 vaccines
News

Column: Why you shouldn’t believe the GOP has suddenly come around on COVID-19 vaccines 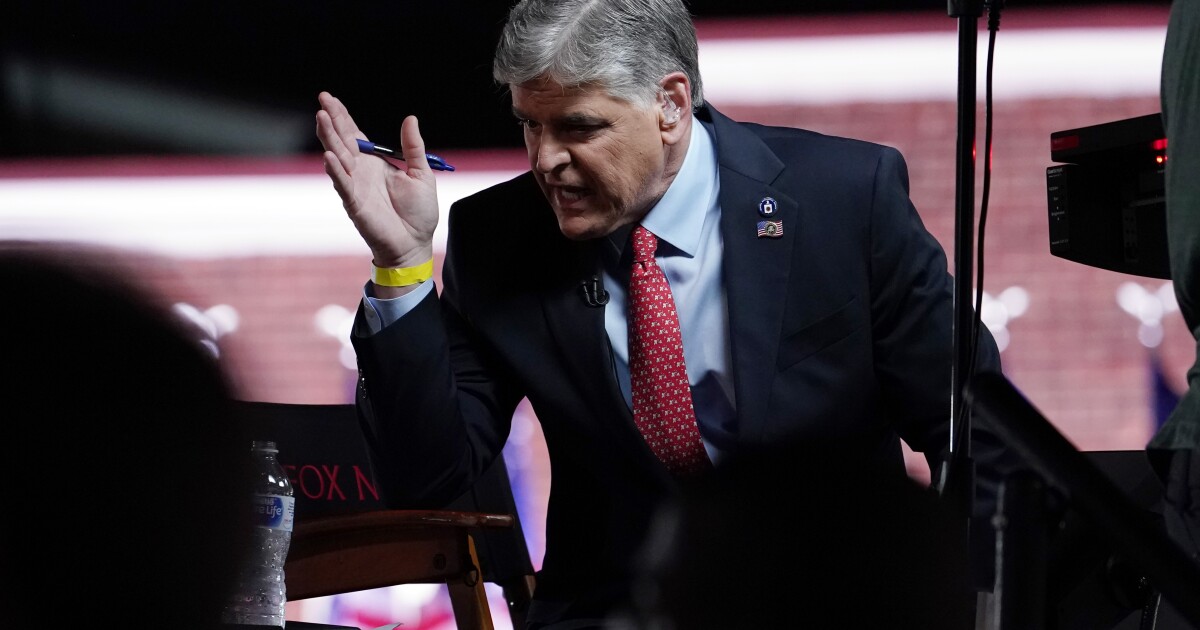 Deathbed conversions should be taken as a mark of hypocrisy unless proved otherwise. Those last-minute obeisances to the Big Guy upstairs by sinners facing the inevitability of death are often indistinguishable from one last con.

That thought should stay with us while we contemplate the outbreak of pro-vaccine jawboning by Republican political leaders and conservative figureheads who earlier undermined trust in the vaccine.

In recent weeks, they’ve been hastening to advise their constituents and listeners to get the shot. Gov. Kay Ivey of Alabama, the least vaccinated state in the union: “It’s the unvaccinated folks that are letting us down…. We’ve got to get folks to take the shot.”

There’s people that were hermits for a year and a half that wore six masks and still contracted [COVID], OK?

There’s no mystery about what triggered these purportedly heartfelt declarations of faith in the COVID vaccine: It’s the Delta variant, which has sent new cases surging, especially in states with low vaccination rates.

As Samuel Johnson wrote, “When a man knows he is to be hanged in a fortnight, it concentrates his mind wonderfully.” These politicians and TV mouthpieces are fearful that they may be blamed for helping Delta run rampant in their communities and among their followers. So their minds have become concentrated.

Yet they don’t deserve praise for their late awakenings to the facts on the ground. Most are still doing their best to undermine public confidence in anti-pandemic measures — and that includes the vaccines. Let’s take a look.

Hannity garnered praise for what seemed on the surface to be a forthright stance in favor of vaccines. But as Kevin Drum observes (among others), when one drills down to his actual words, he was still pushing vaccine reluctance to his viewers.

“Research like crazy,” Hannity said. “Talk to your doctor, your doctors, medical professionals you trust based on your unique medical history, your current medical condition…. You also have a right to medical privacy, doctor-patient confidentiality is also important.”

Not far below the surface of this appeal is his encouraging listeners to expose themselves to the wide variety of anti-vax conspiracy mongering accessible on social media via “research.” As for the references to “medical privacy” and “doctor-patient confidentiality,” it’s hard to take those as anything but a lightly concealed slap at vaccine mandates.

Mandates are commonly opposed as invasions of medical privacy, often through allusions to HIPAA, the Health Insurance Portability and Accountability Act of 1996, which is widely — and inaccurately — taken to bar vaccine requirements imposed by employers, businesses and government agencies.

But as a three-judge panel of the 7th Circuit U.S. Court of Appeals (not remotely a liberal-leaning bench) ruled on Aug. 2 in upholding a vaccine mandate imposed on students by Indiana University, “it is hard to see a … problem with medical [requirements] that help all students remain safe while learning.”

A federal judge in Houston, ruling on June 12, similarly found nothing untoward about a vaccine mandate imposed on employees of Houston Methodist Medical Center. The vaccine-refusing nurses who brought the lawsuit “can freely choose to accept or reject a COVID-19 vaccine,” he wrote. If they refuse, however, they “will simply need to work somewhere else.”

By the way, Hannity didn’t even have the courage of his own supposed convictions. The very day after he seemingly endorsed the COVID vaccines, he withdrew his endorsement. “I’m not urging people to get the COVID-19 vaccine,” he said.

Many GOP leaders speaking up for vaccination also oppose vaccine mandates, ostensibly in the name of individual freedom; never mind that vaccination is a key to protecting not merely the vaccinated but also their entire communities, and that mandates may prove to be more effective in raising vaccination rates than the lotteries or other blandishments rolled out by some states and localities.

Some also take the opportunity of pushing for vaccinations to reiterate their hostility to other measures for fighting the pandemic, such as mask-wearing. As former Medicare official Andy Slavitt observes, Arizona, Arkansas, Iowa, Oklahoma, South Carolina, Texas, Utah, Vermont and Florida all have prohibited schools from requiring masks.

At least one governor is experiencing anti-mask remorse. Asa Hutchinson of Arkansas now says he wishes he hadn’t signed a bill preventing local officials from imposing their own anti-pandemic measures.

“But it is the law, and the only chance we have is either to amend it or for the courts to say that it has an unconstitutional foundation,” he said in a remarkable, and so far unique, about face.

Hutchinson also called the state legislature into special session to enact a bill that would allow school boards to decide for themselves whether to require mask-wearing by pupils.

Florida’s Republican Gov. Ron DeSantis, who as I’ve reported before has a peerless ability to grab the wrong end of the stick on anti-pandemic measures while bragging about his courageousness, is again leading the pack in truculent anti-mask humbug even as he has issued grudging endorsements of vaccination.

Let’s not forget that DeSantis issued executive orders prohibiting businesses in Florida from requiring proof of vaccination from patrons and schools from requiring masks. He also signed a bill prohibiting Florida counties and municipalities from imposing their own anti-pandemic measures, including mask requirements.

At a news conference the other day, DeSantis went on a tear about masks: “There’s people that were hermits for a year and a half that wore six masks … and still contracted [COVID], OK?” he declared. His remark sent social media users on a search for such prodigious yet infected mask-wearers, without success.

DeSantis’ demonization of respected epidemiological expert Anthony Fauci, whom he has chosen to blame for mask mandates even though Fauci has no such governmental authority — “Don’t Fauci my Florida” is DeSantis’ catchphrase, imprinted on merchandise he’s selling to raise campaign funds — also has the effect of calling all anti-pandemic measures into question.

The harvest of DeSantis’ posturing is coming into view, as Florida’s coronavirus case rate remains at or near the top among all states.

Make no mistake: The scientific evidence shows that masks work to help suppress the spread of the virus. John T. Brooks and Jay C. Butler of the Centers for Disease Control and Prevention compiled studies from across the country and abroad, finding that “universal mandatory mask wearing policies have been associated with reductions in the number or rate of infections and deaths…. The greater the extent to which the intervention — mask wearing in this case — is adopted by the community, the larger the benefit to each individual member.”

Some Republicans who have been in the forefront of opposition to anti-pandemic measures may have come around on vaccines because of personal experience, or they may be trying to erase memories of their previous political posturing.

Sen. Lindsey Graham (R-S.C.), in announcing days ago that he had tested positive for the coronavirus despite having been vaccinated, said, “I am very glad I was vaccinated because without vaccination I am certain I would not feel as well as I do now. My symptoms would be far worse.”

He didn’t mention that he had been a warrior against mask rules, recently displaying a mask that read “Mask up the border,” suggesting that a rise in infections was due to immigrants coming across the southern border, not the loose approach to social measures in Southern states such as Texas, Louisiana, Mississippi and Alabama.

“If you’re really worried about who should be wearing a mask, you need to fix the border,” he said July 30. “This is a border that is completely porous and open when it comes to COVID.” Graham’s home state ranks 10th in the nation in cases per capita, with a rate that has risen 81% over the last week. South Carolina is 1,350 miles from the border.

None of this should be taken to minimize the tragedy for individuals who have had COVID-19, with sometimes fatal results, because they’ve refused or simply failed to get vaccinated. The expressions of regret from many of them are heartbreaking. So, too, is the burden on healthcare workers who have to tell patients in their ICUs that it’s too late for them to change their minds and get the shot.

But we can’t overlook the responsibility of state and national leaders who have treated the battle against COVID-19 as a game, including that clutch of GOP House members who marched theatrically across the Capitol to the Senate side to take refuge from the House Democratic leadership’s reimposition of a mask mandate in their chamber, for what they called “a taste of freedom.”

They’re marching for the “freedom” to infect innocent people not only with the coronavirus but also the virus of misinformation. Some of these leaders may well come down with COVID-19 in the next days, weeks or months, at which point they too will either express relief that they have been vaccinated, if quietly, or regret that they haven’t done so before.

For some it will be too late.

Tags: Los Angeles News
Previous Story
At my wife’s Santa Ana market, the masks have never come off
Next Story
L.A. is weighing vaccination requirements. Here are 20 restaurants and bars already implementing them