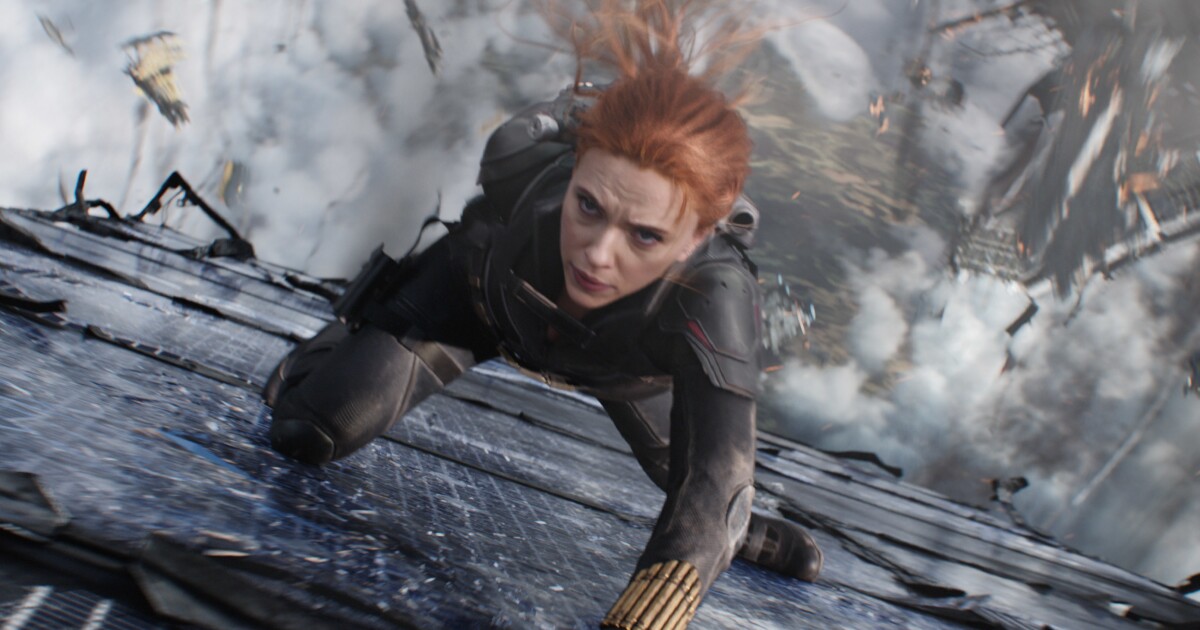 Scarlett Johansson’s legal battle with the Walt Disney Co. has heated up a notch.

On Friday, Disney’s lead attorney, Daniel Petrocelli, filed a motion in Los Angeles County Superior Court that seeks to have the more than $50-million breach of contract lawsuit decided in private arbitration proceedings rather than by a California jury.

Johansson’s legal team has demanded that the dispute be decided by a jury in open court.

Johansson alleges she was cheated out of compensation because Disney sold the Marvel movie “Black Widow” on its streaming service, Disney+, while the film was still in theaters. Marvel and Johansson agreed four years ago that her compensation would be based on theater ticket sales. The actress and her legal team have argued that “Black Widow’s” simultaneous release on Disney+ diminished box office receipts for the action film.

Her case has become a tinderbox in the tensions in Hollywood as media companies scramble to adjust their decades-old business models to reflect the realities of the COVID-19 pandemic and streaming.

Studios, streaming services and talent agencies are grappling with important issues: How should stars and filmmakers be paid for movies and TV shows now that the economic model is shifting quickly from one based on box office and television ratings to one reliant on online subscriptions? What is fair compensation for actors, writers, directors and producers when media companies, including Disney, control both the production and distribution of their content?

To complicate matters, streaming viewership data are typically kept under wraps, making it difficult to gauge the profitability of a movie or TV show. Companies also are finding other ways to generate value for their content, including subscription sales.

The Johansson versus Disney dispute has become particularly contentious.

“After initially responding to this litigation with a misogynistic attack against Scarlett Johansson, Disney is now, predictably, trying to hide its misconduct in a confidential arbitration,” the actress’ attorney, John V. Berlinski, fired back Saturday in a statement to respond to Disney’s request for arbitration. “Why is Disney so afraid of litigating this case in public?”

Disney’s chief litigator, Petrocelli, said in a statement: “We are simply asking the Court to enforce the parties’ contract requiring arbitration of all disputes.”

In court papers, Disney’s legal team wrote that Johansson and her firm, Periwinkle Entertainment Inc., had previously agreed that claims connected to Johansson’s portrayal of Natasha Romanova in “Black Widow” “would be submitted to confidential, binding arbitration in New York.”

But Johansson’s team is arguing that it was the parent company Disney — not its subsidiary Marvel — that ultimately decided to simultaneously release the film on Disney+, and so it was Disney — not Marvel — that breached the agreement. Her lawyers contend that Johansson’s lawsuit is appropriately targeted at Disney, and thus, there is no mandate for arbitration.

Johansson and Marvel entered into the May 2017 employment agreement long before fears about the spread of COVID-19 led to the closure of theaters and a delay in the film’s release. Disney’s court papers said that “Marvel was obligated to pay Johansson fixed compensation, regardless of whether the picture was released or how it performed at the box office.”

In the May 2017 contract, the two sides also agreed that “Johansson could potentially earn additional compensation if the picture were released and hit certain box-office thresholds.” When compared to the box office performance of other Marvel films before the pandemic, Johansson could have earned at least $50 million in compensation, knowledgeable people have said.

A key question surrounding Johansson’s lawsuit is whether the Burbank entertainment giant fulfilled its contractual obligations to give “Black Widow” a wide theatrical release. Disney said the contract called for the film to be released on “no less than 1,500 screens.”

Disney argues that its distribution of “Black Widow” more than satisfied its agreement.

“Marvel made good on its promise,” Disney’s team wrote in its court motion. “After shifting the original May 2020 release date several times — including at Johansson’s request — the picture ultimately debuted on July 9, 2021 on more than 30,000 screens.”

In an interview earlier this month, prominent entertainment attorney Jeffrey Finkelstein said Johansson’s lawsuit has highlighted how streaming services have upended the economics of the business.

“The rules have been changing for years. What we are seeing is an acceleration due to the pandemic,” said Finkelstein, a partner in the Los Angeles law firm of Del, Shaw, Moonves, Tanaka, Finkelstein, Lezcano, which represents talent.

“These changes were already happening but perhaps on a bit of a slower timeline, but on the talent side, it was already too fast of a timeline,” Finkelstein said.

He said it will be difficult to determine just how much Disney’s decision to offer “Black Widow” on Disney+ cut into ticket sales, particularly when some moviegoers are wary of going to theaters due to the rise of coronavirus infections due to the Delta variant. But, Finkelstein added, it was reasonable to conclude that sales were “somewhat reduced by the day-and-date release” on Disney+.

The arbitration issue is expected to be decided after an Oct. 15 hearing.

Disney “knows that Marvel’s promises to give Black Widow a typical theatrical release ‘like its other films’ had everything to do with guaranteeing that Disney wouldn’t cannibalize box office receipts in order to boost Disney+ subscriptions,” Johansson’s attorney, Berlinski, said in his statement. “Yet that is exactly what happened — and we look forward to presenting the overwhelming evidence that proves it.”

The two sides have tussled before in arbitration proceedings.

Previously, Berlinski and his partner, Dan Saunders, represented the stars and producers of the “Bones” television series in a landmark profit participation dispute with 20th Century Fox Television, now owned by Disney. Litigation began in 2015 when the show‘s stars Emily Deschanel and David Boreanaz, along with executive producer Barry Josephson and crime writer Kathy Reichs, sued Fox, accusing the television studio of cheating them out of millions of dollars in payments.

Arbitrator Peter Lichtman stunned the television business in 2019 by slapping Fox with a $178.7-million judgment.

The “Bones” award was among the largest of its kind and highlighted the accounting practices of major studios and whether they shortchange talent. The Disney-owned Fox studio appealed, and the two sides eventually resolved their differences in a confidential settlement.