Disneyland and other California theme parks, reopening in just weeks, scramble to get ready

Disneyland and other California theme parks, reopening in just weeks, scramble to get ready 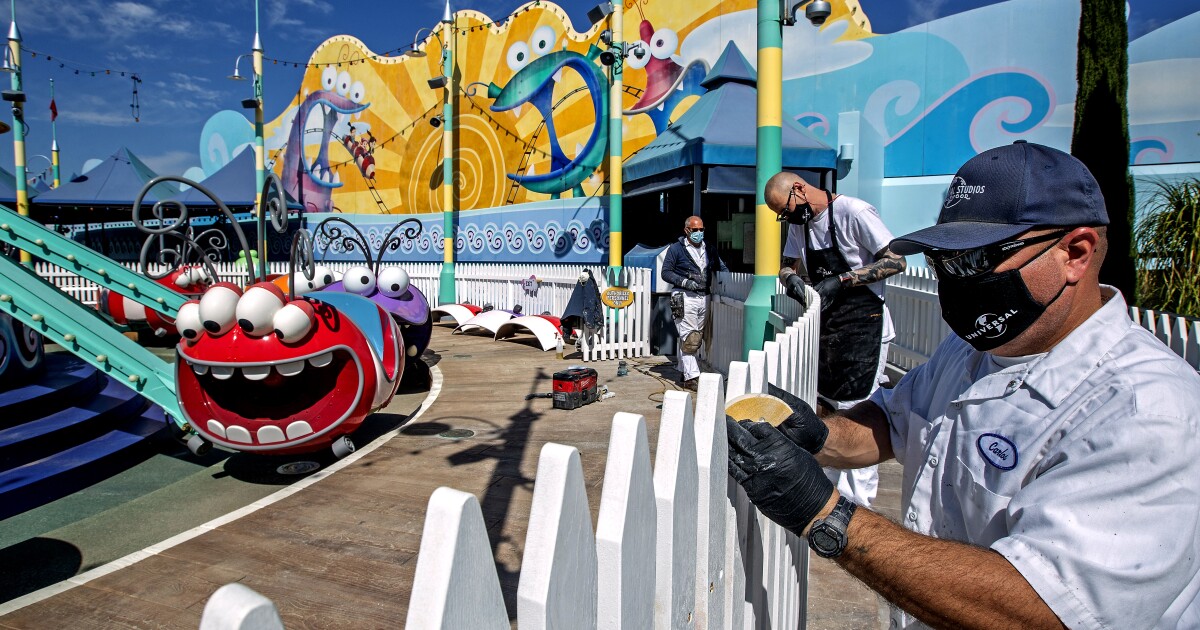 The assassination of President Kennedy led Disneyland to close for a day in 1963.

The COVID-19 pandemic has shut California’s largest theme parks for more than a year, creating an unprecedented challenge for the operators of Disneyland, Universal Studios Hollywood and other parks who are now scrambling to prepare to reopen under more relaxed safety protocols issued by the state.

It’s a big job: They must prepare dozens of attractions for daily use, rehire and train thousands of workers, and adopt a slew of new safety protocols that in many cases dramatically alter how attractions will operate and how visitors will be expected to behave.

Making the challenge even more difficult: Park officials are not sure whether the state will release detailed safety protocols that affect which attractions can open, which need to be altered before they are available to visitors and which must remain offline for now.

Disney is preparing a range of game plans as it awaits a response from the state, said Kris Theiler, vice president of the Disneyland Park.

Gov. Gavin Newsom and California public health officials announced this month that with the rollout of vaccines and the drop in new COVID-19 cases, the state would allow theme parks to reopen earlier than previously anticipated. Parks in counties with low enough coronavirus transmission can open as early as April 1.

The state has offered only a handful of guidelines: All park visitors must be California residents and wear masks, indoor dining is prohibited, and workers must be tested weekly for the coronavirus. For parks in counties in the second-most-restrictive tier of the state’s four-category reopening road map — the tier currently including Los Angeles and Orange counties — total park attendance will be capped at 15% of capacity, and parks’ individual indoor attractions will be limited to a maximum 15% capacity with time restrictions.

Theme park executives say they are assuming the state will accept those guidelines or make only minor adjustments.

“We have some foundational points that we are working on,” Strobl said.

Only weeks remain to nail down the details and get everyone ready.

Universal Studios Hollywood is expected to open in late April, and Knott’s Berry Farm in Buena Park sometime in May. Six Flags Magic Mountain in Valencia plans to open April 1 and 2 to members and passholders and daily starting April 3 to the general public. Disney and Universal Studios Hollywood officials said single-day ticket prices at their parks are expected to be in line with last year’s prices.

The biggest challenge will be rehiring thousands of workers and training them on the safety guidelines they must follow and on ways to enforce safety protocols among parkgoers, theme park executives and union leaders say.

A coalition of unions representing about 17,000 workers at Disneyland has been meeting with Disney for months to hash out COVID-19 safety protocols for employees, including regular testing, providing maximum indoor ventilation and protective equipment, said Austin Lynch, organizing director for Unite Here, Local 11, which represents hotel and restaurant workers at the resort.

“We feel pretty good about their readiness,” he said of Disney.

Some theme park employees who work in restaurants are already eligible to receive a coronavirus vaccine. The parks are encouraging employees to get vaccinated but are not requiring it.

To comply with the California rule prohibiting parks from admitting visitors from outside the state, park operators say they can require all visitors to submit a California ZIP Code or other information when booking tickets online.

To prevent visitors from crowding together, the parks are not yet relaunching parades and nighttime spectaculars such as the World of Color water and light show at Disney California Adventure Park.

Park operators say the most dramatic changes will probably be made on rides that were designed to have parkgoers sit or stand close together for 15 minutes or more.

To reduce the risk of virus spread, Universal Studios Hollywood is delaying the opening of Despicable Me: Minions Mayhem and the Simpsons Ride, motion-simulator rides that put parkgoers in side-by-side seats in a theater setting.

The queue for the Harry Potter and the Forbidden Journey ride at Universal Studios Hollywood winds through the Hogwarts castle, where visitors can stop to look at moving images that tell part of the attraction’s story. To keep visitors from crowding together, Strobl said, the park will send small groups of people into the ride’s queue every few minutes.

The number of passengers per vehicle will be limited on some attractions, such as Jurassic World: The Ride, which was designed to fit rows of five riders shoulder to shoulder, Strobl said. Other attractions with only two or three adjoining seats can operate as normal if the seats are filled by people from the same household, he said.

In the Universal Studios backlot tour, plexiglass will be installed between the parkgoers and the drivers and ride narrators.

At Disneyland, a limit on seating is more likely on an attraction such as Pirates of the Caribbean, where riders sit next to one another on long benches in the floating vehicle, Theiler said. The ride operators will enforce such restrictions.

She noted that other attractions, such as Peter Pan’s Flight, are designed to seat only two or three people together.

“We are happy to be on the road to reopening,” Theiler said. “We can’t wait to see Disneyland the way it should be: filled with guests.”

Tags: Los Angeles News
Previous Story
Working from home takes a physical toll — and companies are trying to profit from that
Next Story
NFL’s Martellus Bennett sells a house with a view in Hollywood Hills