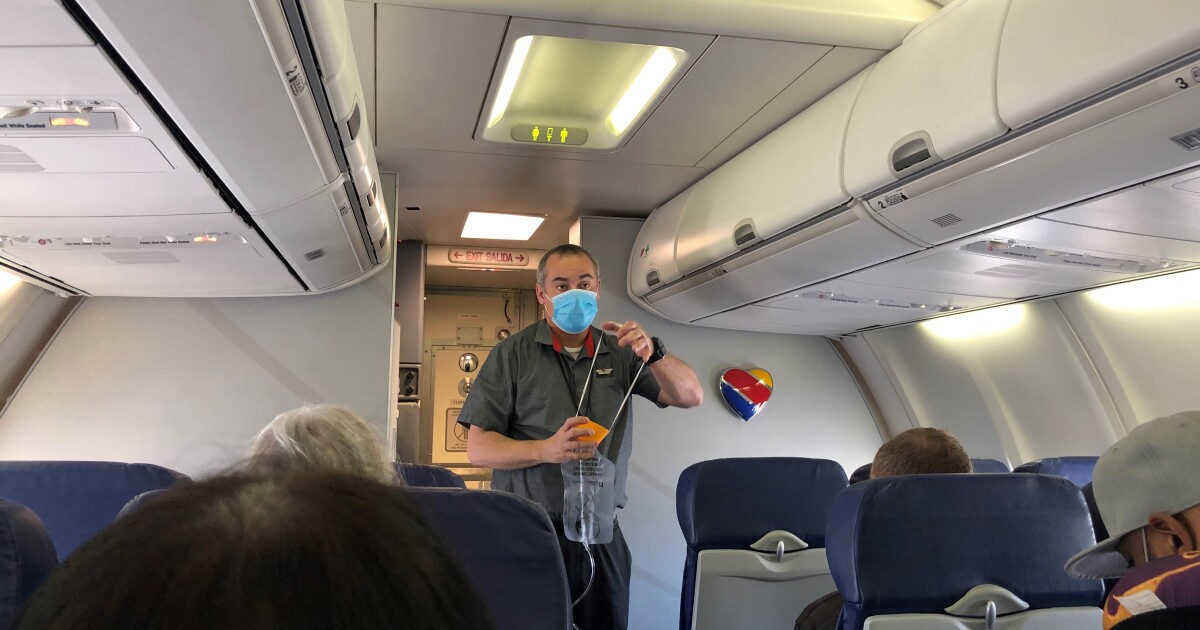 As air travel demand increases, a vast majority of flight attendants say they have dealt with unruly passengers, and nearly 1 in 5 experienced a physical incident, including shoving, kicking seats and harassing flight crews at airports, according to a survey of flight attendants released Thursday.

The Assn. of Flight Attendants-CWA conducted the survey of nearly 5,000 flight attendants across 30 airlines to pressure airlines and government officials to take stronger measures against passengers who verbally or physically abuse flight crews.

“The atmosphere that these relatively small number of passengers are creating is increasingly hostile,” Sara Nelson, president of the association, said during a Zoom news conference Thursday. She called on the Federal Aviation Administration to continue its “zero-tolerance” policy against unruly behavior and pursue more criminal prosecutions of violators.

The survey found that 85% of flight attendants have dealt with unruly passengers and that 71% of those who filed incident reports with airline management said they received no follow-up. Most said they have not seen efforts by airlines to address the rise in unruly passengers, according to the survey.

Nelson also called on airlines to address the problem by adding more employees at airport gates to spot potentially difficult passengers early and by emphasizing the message that bad behavior on planes won’t be tolerated.

“The communication from start to finish can be better,” she said.

Airlines for America, a trade group for the nation’s air carriers, wrote a letter to the U.S. attorney general last month, expressing concern over the rising numbers of incidents and urging federal authorities to crack down on passengers who misbehave on planes.

“We ask that more be done to deter egregious behavior, which is in violation of federal law and crewmember instruction,” the letter stated.

Air travel demand has been rising steadily for the last few months but still represents only about 65% of the passenger totals reported in the same period in 2019, according to industry statistics.

According to federal reports, the number of incidents of unruly passengers on U.S.-based airlines began to surge in February, shortly after the federal government mandated that all passengers wear masks during a flight, except when eating and drinking.

This year, airlines have reported 3,615 incidents of unruly passengers, with most of the incidents — 2,666 — related to disputes over the mask mandate, according to the FAA.

The rise of incidents comes despite FAA Administrator Steve Dickson issuing a zero-tolerance order in January against unruly behavior. Instead of receiving warnings or being required to seek counseling, violators now face criminal prosecution or fines of as much as $35,000.

The survey of flight attendants confirmed that mask compliance, alcohol and routine safety reminders were the primary cause of unruly behavior. Flight delays and cancellations were also common factors in the ugly onboard incidents, the survey found.

One flight attendants quoted in the survey said: “I’ve been yelled at, cursed at and threatened countless times in the last year and the most that has come out if has been a temporary suspension of travel for the passenger. We need real consequences if flight attendants are ever going to feel safe at work again.” The report did not identify the airline where that flight attendant works.

Soon after the pandemic struck in the spring of 2020, most airlines adopted policies that require passengers to wear masks. The U.S. Department of Transportation imposed a federal mask mandate that took effect Feb. 1 of this year. Violators face a fine of $250 for the first offense and as much as $1,500 for repeat offenses. In addition, the FAA can also impose criminal prosecution and civil penalties for unruly behavior.

The rising number of ugly scenes on flights prompted several FAA staffers to record a public service announcement this summer, urging passengers to behave on planes. But because the FAA did not have funding for a PSA, the staffers videotaped their own children to deliver the message.

Among those children in the video was Benjamin, the 9-year-old son of Kristina Harris, an FAA communications strategist in Tucson. “Fighting is not good when you are on a plane,” the boy said in the video.

The video was launched in early July, timed to appear before the Fourth of July travel surge.

“I think we had the right combination of ideas,” Harris said. “Let’s have the kids carry this message.”