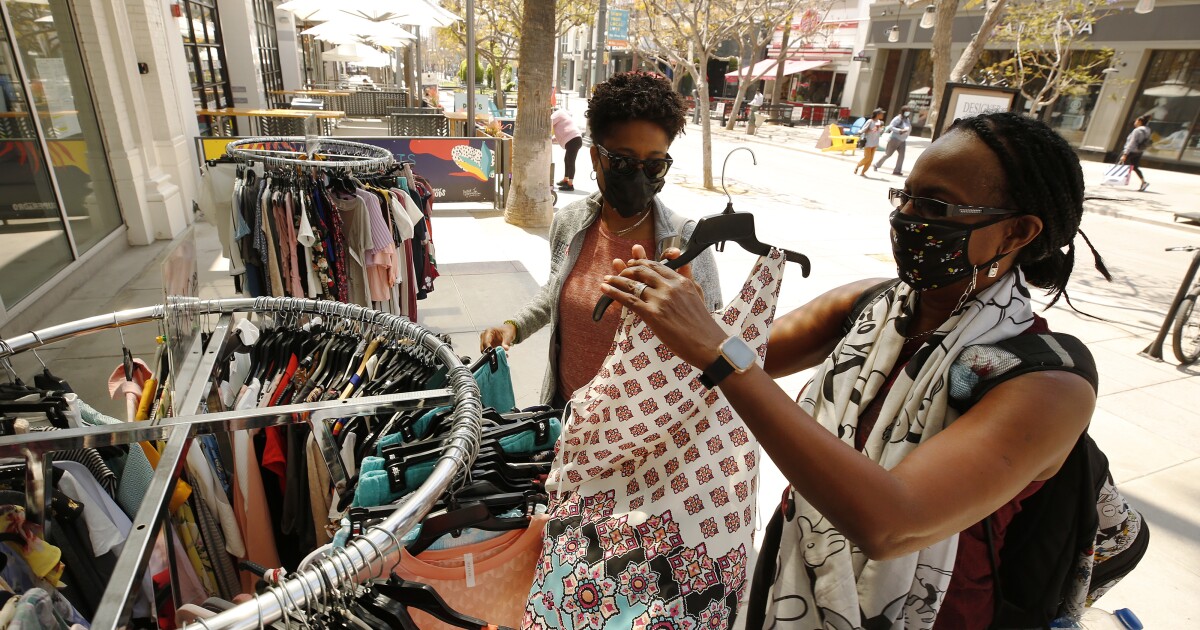 Los Angeles County is seeing new signs of a resurgent economy, with plummeting coronavirus cases allowing for a faster-than-expected reopening of bars and expanded capacity for restaurants and other businesses.

In progressing Tuesday to the least restrictive yellow tier of California’s color-coded reopening system, the nation’s most populous county can now unshackle its economy to the widest extent possible, sparking hope for significant recovery in sectors long battered by the pandemic.

A swath of businesses and venues — including restaurants, gyms, movie theaters, amusement parks, stadiums and museums — will be able to operate at higher capacity starting later this week. Indoor bars will be able to reopen without being required to serve food.

The relaxed restrictions, details of which will be released Wednesday and go into effect Thursday, are accompanied by a newfound sense of optimism in a region that was a national epicenter of the pandemic just a few months ago, with hospitals pushed to the brink and staggering numbers of people dying every day.

After peaking at 241 deaths a day over a seven-day period in January, L.A. County is now recording about 19 COVID-related deaths a day — the lowest such figure since the autumn.

California now has the lowest coronavirus case rate of any state and, if the growing crowds in business districts, malls and restaurants are any indication, residents long locked down are feeling safer about going out.

Doane Liu, executive director of the L.A. Department of Convention and Tourism Development, said that at the worst point in the pandemic, occupancy at the city’s hotels fell below 20%. That figure has already topped 50% and is on track to approach 70% by mid-2022, he said.

The L.A. Tourism and Convention Board, a nonprofit group that markets the city, has begun running ads with the message “Start Your Comeback” in 20 national media markets.

Tourism is a huge piece of the county’s economy, and it was devastated by the COVID-19 pandemic. Some boosters hope to see the sector significantly recover during the summer but are not sure how much.

A UCLA forecast released in March said California’s leisure and hospitality industries would grow faster this year than any other sector, with a 10% gain as restaurants and theme parks begin to reopen.

“There is pent-up demand for travel. More than two-thirds of Americans say they plan on traveling this summer,” Liu said. “Things are really reopening, like Universal Studios and the museums.”

Since the recent reopenings, Simmzy’s restaurant on 2nd Street has experienced its highest sales ever — even since before the pandemic, according to manager Rachel Gerdeman.

With the county now in the yellow tier, Simmzy’s will soon be able to reopen its countertop bar.

After more than a year of rollercoaster lockdowns, however, the move to the yellow tier made little difference to Shella Garcia, who has owned the children’s clothing shop Sweet Threads in Belmont Shore for four years.

“It’s a regular Tuesday,” Garcia said with a shrug.

Her co-worker, Jaimie Lor, said that while local patronage hasn’t quite returned to normal, she’s noticed a slight increase in visitors from out of state. Garcia agreed — she went out of town herself recently.

“With the lifting of restrictions, I definitely want to get out,” Garcia said. “Hopefully, that will bring business here.”

A more complicated question is what will happen to retailers who cater to office workers in places such as Century City, downtown L.A. and Westwood. Many businesses have had their employees largely working remotely for more than a year now, devastating businesses that rely on the patronage of onsite workers.

Maria Salinas, president and chief executive of the Los Angeles Area Chamber of Commerce, said businesses would be creating “a new normal.”

“We’re going to emerge into a different kind of economy that I believe is going to be much more flexible,” she said. “We see that everywhere, in every industry — rethinking how they use technology, how they sell their products, how they’re communicating with their workforce.”

Salinas said businesses are pursuing “hybrid methods” of returning to the office that give people more flexibility and hammering out safety protocols.

For both workers and customers, she said, “you can have all the safety measures in place, but part of what is going to make it is the psyche of feeling comfortable walking into a space.”

Stuart Waldman, president of the Valley Industry and Commerce Assn., said he has checked in with more than 100 of his group’s members over the last three months.

For now, he said, it doesn’t appear that people are “quite ready yet mentally to come back to the office full force.”

Moving to the yellow tier was hailed as a major achievement for L.A. County. It got there by recording an adjusted daily new case rate of fewer than 2 per 100,000 people, overall test positivity of less than 2% and a health-equity positivity of below 2.2% for two consecutive weeks.

According to data released Tuesday, the county’s latest adjusted case rate was 1.6, one of the lowest figures in the state.

“We’ve done a really decent job holding our own if you look at our case numbers,” Public Health Director Barbara Ferrer said. “And people are really invested, I think, at this point in seeing our recovery move forward.”

Officials are generally optimistic for the future, but have expressed concern at a recent 23% week-over-week drop in administered vaccine doses. They also said physical distancing, wearing face coverings and other safety rules must be followed if the county is to avoid regressing — which happened twice last year after reopenings.

“The hard work we’re doing as a community to protect ourselves and each other from this infection is allowing us to return to the many activities we cherish. Thanks to everyone for all the masking, distancing, hand washing and vaccinating,” Ferrer said.

For Cinco de Mayo, officials urged people to avoid large crowds, wear a mask at all times except when eating or drinking and, if celebrating with other people outside their household, to do it outdoors.

So far, some business owners say they are seeing the benefits of the ongoing reopening.

At Ronan, a restaurant on Melrose Avenue, business has been increasing week by week, said co-owner Caitlin Cutler.

The latest health order, she said, means the restaurant can have 20 seats indoors, up from 16, in addition to the ones that are on the patio and in the parking lot.

To have the restaurant’s receipts growing, and seeing people eating indoors, is “really rewarding,” she said.

“That’s part of why you work in a restaurant — having regular customers, seeing people come back, having them celebrate birthdays, anniversaries and graduations,” Cutler said. “For a year we put food in a box and just sent it out with a stranger.”