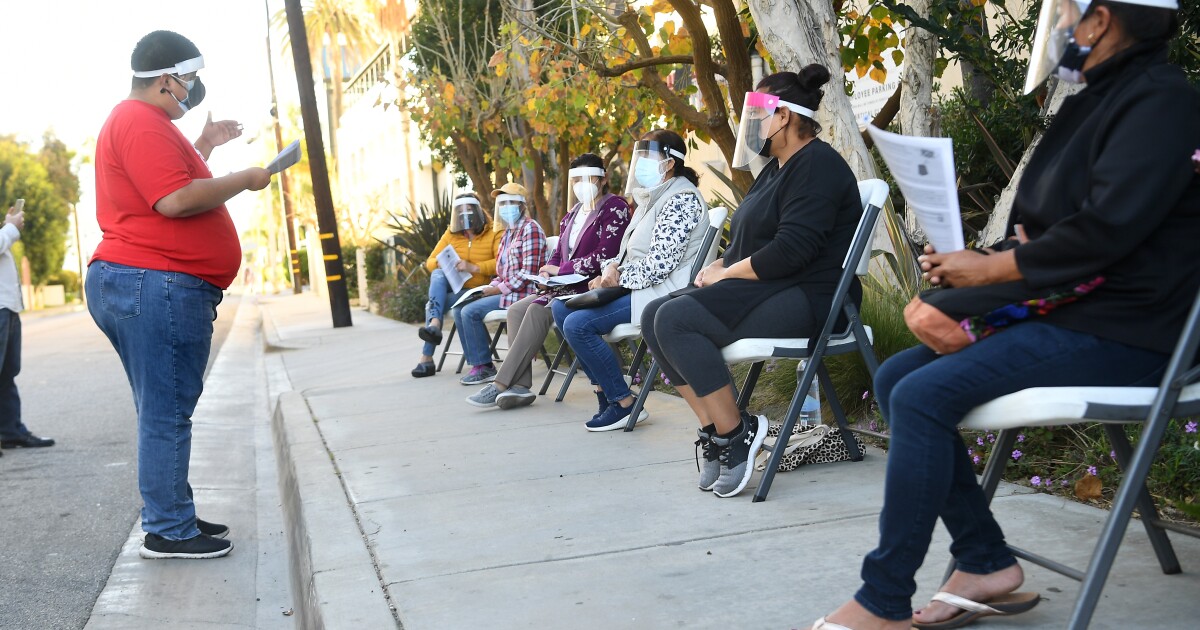 Housekeeping workers at a luxury Santa Monica hotel filed a complaint Thursday with the California agency responsible for enforcing workplace health and safety protections, underscoring the continued challenge for businesses, workers and officials in tamping down the spread of COVID-19 on the job.

The complaint alleges the JW Marriott Santa Monica Le Merigot has violated COVID-19 regulations that the California Division of Occupational Safety and Health, known as Cal/OSHA, has implemented during the pandemic, including protocols on cleaning and adequate training.

Two housekeeping and spa workers at the hotel, Blanca Guerrero and Claudia Mejia, allege in the complaint that there is inadequate disinfection of employee-only areas at the hotel, and that there isn’t enough space to keep six feet apart in employee dressing rooms, where four to five housekeepers change at a time, according to a copy reviewed by The Times. They also say there has been a lack of effective training on policies and procedures designed to help prevent the spread of COVID-19.

Guerrero, 50, said she’s worried about getting sick and infecting her family. Each day just after her shift she removes her uniform and changes into a new set of clothes to drive home. As soon as she gets home she peels off the clean clothes, tosses them in the washer and showers before greeting her family.

“We want better cleaning,” Guerrero said. “We want the hotel to listen to us and take us seriously.”

Workers filed the complaint with the help of Unite Here Local 11, a union representing hospitality workers. The union says this is the first complaint it has filed with Cal/OSHA about a hotel regarding COVID-19 safety. A spokeswoman for Marriott International said Le Merigot is operated by a franchise-management company and referred all questions to the hotel owner, Columbia Sussex, which did not immediately respond to requests for comment by phone and email.

Caught between businesses trying to keep costs low during the pandemic and unions trying to protect their workers, the state agency has come under criticism for failing to enforce its own rules adequately or quickly enough. As the virus surged again around the holidays, labor and local government leaders stepped up their efforts to take charge of worker safety, and many — including some inspectors at Cal/OSHA itself — say the agency remains understaffed and disorganized.

On Wednesday, a California court rejected efforts by business groups to secure a preliminary injunction against Cal/OSHA’s emergency COVID workplace safety rules. Businesses and trade associations representing the retail and agricultural industries that mounted the legal challenge argued the new regulations are unnecessary and financially burdensome, and were implemented without allowing employers to weigh in. The court dismissed these arguments, saying they were unlikely to prevail in their claims particularly when keeping such rules in place is in the public interest.

“With the single exception of restrictions on attendance at religious services, which present unique constitutional considerations, no federal or state court in the country has blocked emergency public health orders intended to curb the spread of COVID-19, and the illnesses, hospitalizations, and deaths that follow in its wake. This Court will not be the first. Lives are at stake,” San Francisco Superior Court Judge Ethan P. Schulman wrote in an order issued Wednesday.

In Los Angeles County, the Department of Pubic Health has cited 15 hotels since Aug. 29 for failing to comply with COVID-19 safety protocols, according to a county website listing health order compliance citations. La Quinta Inn & Suites in Pomona and Ramada Plaza LAX in Hawthorne, which received citations in the fall, and the Ford Hotel in L.A., cited twice in early January, are among the largest hotels — all with more than 100 rooms — to receive citations.

Unite Here Local 11 said the group has complained to the Los Angeles County Department of Public Health about Le Merigot before, and has petitioned county regulators on virus-related safety measures for other hotel workers in recent months. The union represents about 30,000 workers in hotels, restaurants, airports, sports arenas and convention centers in Southern California and Arizona.

In response to a previous complaint made by the union, a county health department inspector visited Le Merigot and reported on July 2 a “lack of adequate hand sanitizer stations” and “inadequate visual cues provided for proper social distancing near elevators,” according to a report sent to the union.

The inspector also concluded that adequate supplies of face coverings, sanitizer wipes and gloves were available. The inspector reported back to the union on safety procedures that appeared in place to protect workers “such as ventilating the guest rooms before entering, only cleaning the room when the guest is not present and providing separate pick up of soiled and clean linen,” the report said.

The complaint filed Thursday against Le Merigot alleges the hotel has offered its staff minimal COVID-19 training sessions in English, even though most housekeeping workers at the hotel are monolingual Spanish speakers. That violates rules requiring training to be “readily understandable by all affected employees,” it says.

Workers received a training session given by a front-desk agent last summer and viewed a COVID-19 informational video shown by the hotel this month, both in English, according to the complaint. Workers also attended a required training session held via a Zoom videoconference provided by the city of Santa Monica in Spanish about the city’s hotel-worker protection ordinance, which included some basic COVID-19 guidance such as how to wear a mask, wash hands and maintain social distance, the complaint says.

Beyond those, the hotel has not offered any more significant safety training or guidance, the complaint alleges. Although it has staggered the start time for housekeepers into two shifts to aid with physical distancing, adequate spacing in the locker room is still difficult, it says. The complaint also alleges that the hotel has failed to disinfect surfaces in worker-only spaces including the locker room, employee cafeteria, laundry room, utility closets and the service elevator.

Rachele Smith, a communications organizer with Unite Here Local 11, said the complaint aims to “push the company to start following the rules.”

Smith said Le Merigot had not been providing enough face coverings or hand sanitizer to housekeeping workers, but conditions improved last week when the company learned the union was investigating the issue.

The union conducted its own Spanish-language training for housekeeping workers on Cal/OSHA’s emergency temporary standards for Le Merigot workers outside the hotel Thursday afternoon, timing the event with the filing of the complaint.

On Wednesday, the same union filed a complaint with the Los Angeles County Department of Public Health alleging that Mr C Beverly Hills, a boutique hotel in L.A., may have failed to report 11 cases of COVID-19 among its workers from October through December.

Union leaders say they are concerned the hotel has not reported the cases to the county, as required by regulations that call on hotels and other short-term rentals to report three or more cases of COVID-19 in the workplace in a span of 14 days. The union complaint also asks the agency to look into whether the hotel provided adequate training and enforced safety protocols that designate when a housekeeping worker can enter a room.

A representative for Mr C Beverly Hills could not be reached for comment.