How I became Florida Man: Why one Bay Area startup founder joined the Miami migration

How I became Florida Man: Why one Bay Area startup founder joined the Miami migration 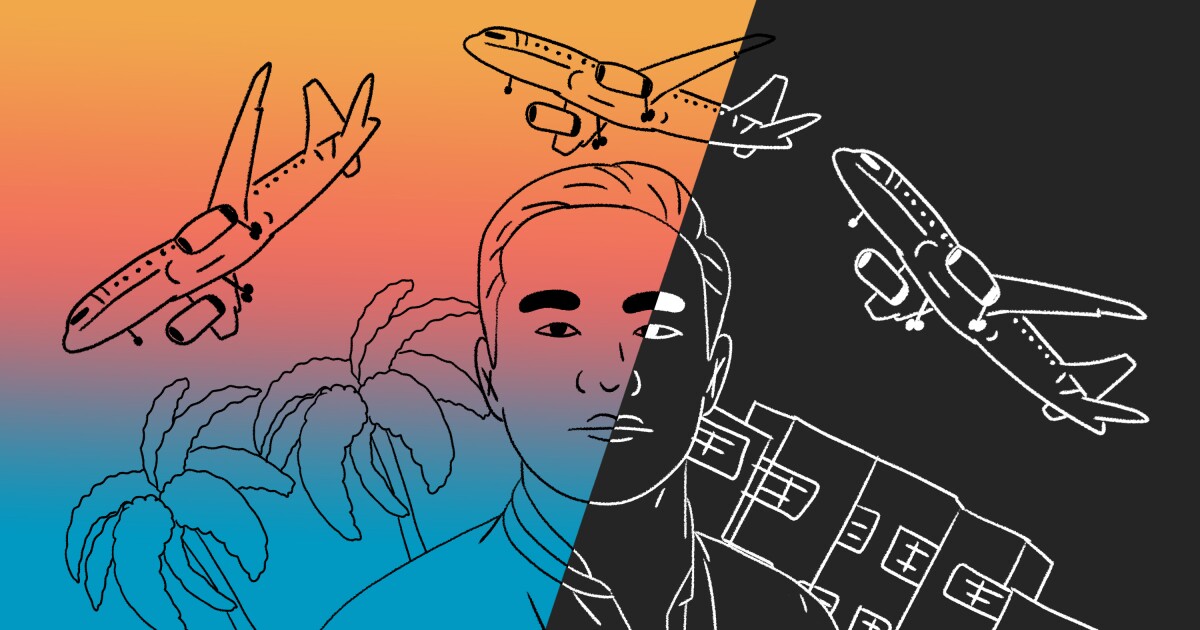 South Florida is about as far as you can get from San Francisco and still be in the continental U.S. — geographically and culturally. But over the last few months, a steady tide of venture capitalists, startup founders and other tech industry workers have made the journey from the Bay Area to Miami. For many — just how many is a matter of dispute — it was a one-way trip.

Geoffrey Woo is part of the so-called Techxodus — the wave of transplants seeking to re-create Silicon Valley in Miami (or Austin, Texas, or Raleigh-Durham, N.C. …). To better understand what’s luring young, ambitious Californians like him away, we asked him to keep a diary of his experience.

It’s a few days after New Year’s and I’m sitting at my desk in my San Francisco apartment when I get a call from an old friend telling me to get on the next flight to Miami. “F” and I met at a high school math and science camp hosted at MIT. Like me, he’s an entrepreneur and investor. He tells me he recently decamped from New York City and is renting a residence suite at the W South Beach. He suggests I stay with him over the weekend and meet up with some of his friends in town.

Since the lockdown, I’ve generally sheltered in place aside from hikes and a few trips out to nature. The thought of a cross-country flight and rumors of Florida’s lax pandemic guidelines gives me pause. F assures me we can restrict our socializing to rooftops and other well-ventilated spaces. Everything will be pandemic-sensible.

Well, I think, everything’s shut down here and I’m just staring at my laptop screen all day long. I have a Zoom meeting scheduled for the following week with Miami’s mayor, Francis Suarez, who is in the midst of a Twitter blitz trying to lure tech and business leaders to his city. I figure I might as well make it an in-person meeting.

I call F back to tell him I’m in. I book a flight for that Friday, four days away.

I was born, raised and have lived in California my entire life. This newspaper, The Times, was a part of our family’s daily breakfast ritual — my younger brother and I would pore through the comics and sports sections, while my dad would read A and Business.

After a childhood of tennis, computers, and math and physics competitions, I took a short hop up to Stanford, where I got my first taste of Silicon Valley. “The Social Network” had just premiered and everything to do with startups and venture capital was hyped and frothy.

I couldn’t have asked for a better context in which to start my career. My startup, H.V.M.N., which makes products to support health and performance through nutrition science, quickly found a receptive set of consumers and backers. Like my parents, who emigrated from Hong Kong and China, I found my American Dream in California. After some 13 years in the Bay Area, eight of them in San Francisco, I saw no reason to leave.

The pandemic changed that.

I land in Miami that Friday night. The heat and humidity hit me; the airport feels like it’s buzzing. On the ride into town, I chat up my Lyft driver. He tells me the city was slow at the beginning of the pandemic, but things have picked up. Business is open, night life is simmering, and a lot of visitors are coming through, especially from New York.

I’m low-key terrified. The social pressure to comply with San Francisco’s hard shutdown has been serious. Just being in Miami feels subversive.

I arrive at the W. People in cocktail attire lounge in the lobby. I go up to F’s suite and meet some of the other people already staying there. One runs one of the fastest-growing fintech startups; another guy — a stranger who brought his young family — runs a next-generation database company. I break open a box of keto bars that my company makes and we have a late night catch-up session. They tell me about a dinner they hosted yesterday, where a bunch of tech luminaries and the mayor showed up.

The next day, more tech and investor friends from San Francisco that I haven’t seen in over a year come by. I excuse myself to go play doubles tennis with recent transplants to Miami — two from San Francisco and one from New York. I’m the worst player on the court after not touching a racket in over a year. As I drive back to shower I promise myself that I’ll hit more often.

Over the next couple days, it feels like every hour some cool startup founder or big shot investor shows up for coffee or a bite. They’re familiar faces from Bay Area venture capitalist hot spots like South Park or downtown Palo Alto, but seeing this community reconstituted all the way across the continental U.S.? It’s boggling my mind. (In another part of my mind is the fear we might all be superspreaders.)

I wish I could get more sleep, but there’s way too much stimulation. We get invited to a backyard party on the water hosted at a music producer’s house. His platinum records decorate the place. Mixed in the tech crowd are some professional athletes and celebrities. Why is everyone in Miami?

I’ve already overstayed my welcome at F’s, so I book an Airbnb in the South of Fifth neighborhood, a homier and chiller section of Miami Beach. I tell my fiancée to book a flight and come experience this explosion of worlds colliding. Digital commerce, biohacking, meme culture, space tech and crypto — it feels like the future is being conceived, negotiated and built, right in front of my eyes.

Now it’s a few weeks later, and I’m back home. It was a magical two weeks in Miami, but I wasn’t going to just uproot my entire life after what was essentially an ad-hoc beach vacation. I settle back into my old routine thinking to myself that I’ll have to visit Miami some vague, indeterminate time soon.

Then I see San Francisco with fresh eyes. I stop by my neighborhood 7-11, where the manager laments the lack of foot traffic, open drug use and shoplifting. He tells me that the new brand-name hotel across the street just shut down indefinitely.

I open up the news. The 10th Walgreens in San Francisco announced its closure because of rampant theft. Criminals beat up a poor young woman at gunpoint and kidnapped her French bulldog in Russian Hill, blocks away from my old apartment. I watched in horror the videos of Asian American elders assaulted and even killed just a few miles from where I live. I see my parents and grandfather in the murder victims.

When I look to our civic officials for leadership, I see only a cold and vicious callousness. The district attorney refuses to prosecute serial criminals. The police commissioner uses Twitter to make fun of a crime victim leaving town, calling him a “tech dude” and a “Karen.” A few police officers I’ve gotten to know tell me that their morale is at an all-time low.

Everyone I know in San Francisco has horror stories. How could I imagine having my parents over or raising children here? Forget about dreaming and building a future, I’m on edge when I walk my city block.

In the weeks that follow, I barely leave my apartment. I revert back to talking to San Francisco friends on Zoom. A third of them have already left, another third commiserate on how bad the city’s become and how they want to leave, and the last brave third desperately try to hold the line. Two of my co-workers tell me they’re going to Miami to check out the scene and look at apartments.

What made me love San Francisco so much was its people. People with warmth and curiosity. People with optimism, charisma and a sense of adventure. People willing to dare. People who were generous with their networks and wisdom. The raw animal energy of the town was what attracted many of the most ambitious builders from around the globe to San Francisco. I saw those people, that energy in Miami.

My colleagues video-call me as they tour apartment buildings. They’ve only been in Miami for the weekend, but they’re going for it. It’s the final nudge I need.

Following one of the leads they gave me, I sign a lease on an apartment, then register Miami offices for my businesses, now all remote-first. Miami is by no means a utopia, and I don’t mean to be a blind cheerleader. Real estate and home prices are ballooning. Some parts of town in midst of gentrification are still very raw. I prefer California’s dry heat to Florida’s humid hug. It’s hard to find good Asian food. And the city is a bit too loud for my personal taste.

I’m sure there are plenty of issues that I’m ignorant about in my few months here, but what’s clear to me is an animal energy and spirit of the people here to take these challenges head on. The old world is gone, and traditional bastions of power are weaker than ever. Miami senses this moment and is making a play for leadership in this new era. What’s more American than an underdog story? What’s more of the future than disrupting Silicon Valley itself?