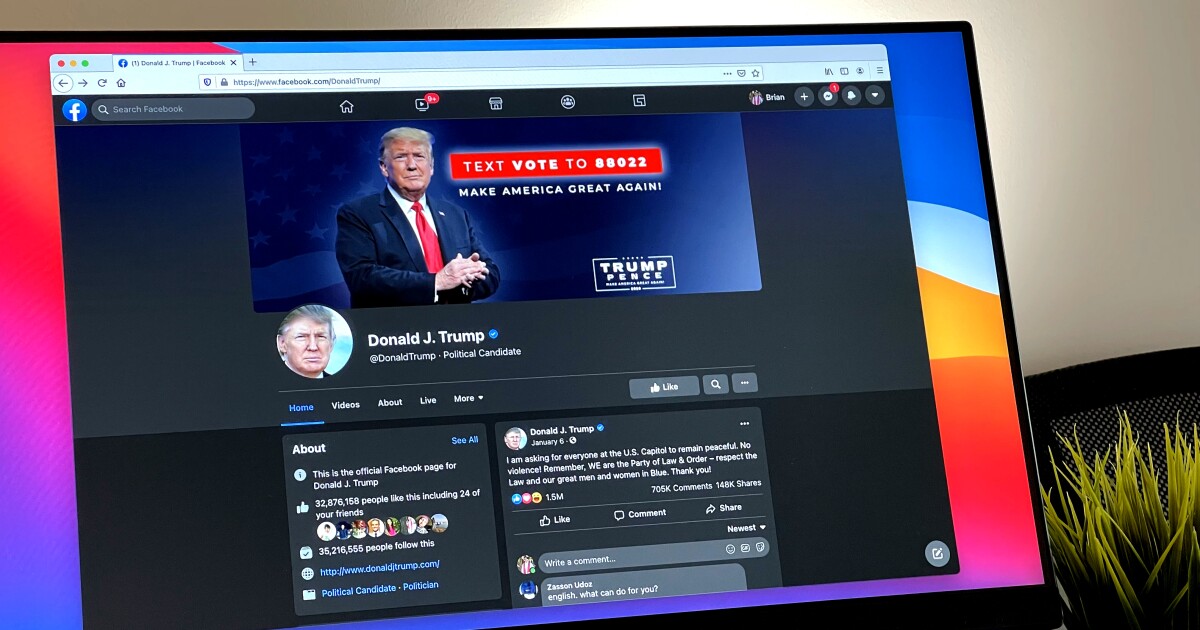 The former president’s last post is dated 3:14 p.m. Jan. 6, 2021, the afternoon of the Capitol riots, as he called for “everyone at the U.S. Capitol to remain peaceful.” Not long after he published that, Facebook — and many other social networks — banned him indefinitely for inciting the riots, instantly turning the account into a time capsule of those final, chaotic days before his presidency ended.

But that’s not the whole story. Because like a whale carcass that sinks to the ocean floor, entire ecosystems popping up in the shadow of its slowly decomposing husk, the comments field below that last post is now a vibrant feeding ground where Trump’s fans and critics still converge, months later, to argue, troll and pay homage.

“I don’t know if you see any of these comments, but I wanted to let you know that We the People, miss you and love you Mr. President,” Cyndi Lane commented April 14 — 98 days after Trump wrote the post to which she was replying. “Hurry back or shall I say, hurry up 2024!”

Lane, 54, is a Missouri wedding coordinator and bridal stylist who’s been voting Republican since the Reagan years. She knew Facebook banned Trump, she told The Times, but left her comment anyway after a news story prompted her to check back in on the account.

“I had been hopeful that maybe somebody that he knows or works with shows him … that we miss him,” she said. “I almost get tearful thinking about it. I feel like our country is in a mess, and I don’t see it getting any better.”

Trump may still eventually return to the page: After enacting the initial ban, Facebook gave its independent Oversight Board the task of deciding whether he’ll ever be allowed back.

But that decision hasn’t been made yet, and until it is, Trump’s page is effectively open to everyone in the world except Trump himself (along with Trump ally Roger Stone and others who have received permanent bans). So now, in lieu of new posts to argue over, the legions of #MAGA conservatives and #Resistance liberals that once duked it out in the comments below each presidential update are stuck piling in under that last Jan. 6 post.

The post has more than 700,000 comments — most of Trump’s preceding posts received between 20,000 and 200,000 — and new replies come in every few minutes. As the first thing that visitors to Trump’s page encounter, it’s become a sort of ad hoc message board for people eager to engage with even the memory of Trump.

“We need to know you hear us,” one supporter wrote April 15.

“You killed us, but Biden is curing us,” a critic said April 21.

“I truly wish Facebook would just delete this page and everything on it. I mean … it’s all a bunch of lies and jokes anyways,” someone wrote March 14. Two days later, that got a response: “You’re addicted. You’re on a closed account for someone you hate. Get help.”

Whereas Twitter blocked Trump’s account entirely — there’s no way to see, let alone reply to, his old tweets — Facebook’s approach to banning him created space for this small but surprisingly durable pocket of political commentary.

“It’s been fascinating to, every day or every other day when I have some time, go and look at the people who write him,” said Anthony Anderson, a 69-year-old Angeleno who works in education. He’s “trying to get an understanding of how a Trump person thinks, since I live here in liberal L.A., and there are some Trump enthusiasts, but not many that I know. ”

Anderson started checking in on the page in early January but said the Jan. 6 insurrection was what really drew him in. Since then, “I haven’t stayed away.”

Other Trump critics he sees there spend their time trying to fact-check or debate Trump supporters — something Anderson thinks “doesn’t get anywhere.” Instead, he simply replies to Trump enthusiasts’ most effusive comments with a tongue-in-cheek link to an article: “Leaving and Recovering from Cults.”

“That’s my subtle resistance,” Anderson said. “That’s all I do.”

Another recurring visitor to the post — a New Zealander who asked not to be identified by name because “there’s a lot of crazy people out there” — described it as an opportunity for him to fact-check Trump supporters, better understand their worldview and get some entertainment in the process.

“You just get sort of — I wouldn’t say sucked into it — but human nature, you just do the reading of, what are people saying?” he said. Sometimes he pushes back on misinformation, but other times he’ll just “drop a one-liner in” to get a reaction.

“There are a lot of people in there that are just crazies; they’re not there to debate or anything like that,” he said. “And I respect the people that are there to have an argument with you, but there’s a lot of people there. A lot of dating people looking for a date; a lot of people [saying], ‘I can get you bitcoin’ — those opportunists.”

On the other side of those interactions are often vocal conservatives who use their comments to thank Trump for his service, share conspiracies about Joe Biden’s presidential win or rally excitement for a 2024 Trump comeback. For some, posting there fulfills an emotional need.

“For those die-hard Trump fans and supporters, this site can represent a location for a parasocial relationship … [or] a one-sided relationship,” said Natalie Pennington, an assistant professor of communication studies at the University of Nevada, Las Vegas. “These people feel like they’re close to Trump even though they don’t know him, which is why you see them commenting in a way that is directed at him, as if he is the one that is reading and writing and responding — even though he’s obviously not responding, since he’s banned.”

Pennington’s research has explored how people engage with the Facebook accounts of their dead friends and family members. She noted parallels between that grief and what Trump’s most persistent Facebook fans express: “We don’t always have the closure we want, or we have feelings that remain over time.… For people who were upset that Trump lost the election, those feelings aren’t just going to go away four months later. And so the page becomes a place for them to continue those conversations amongst each other.”

That behavior, she said, is an extension of older, pre-internet forms of coping: visiting a gravesite, for instance, or attending a funeral.

But for others, commenting on a months-old post from a banned former president is a pale imitation of the direct line of communication with Trump that they used to have and want back.

“In Telegram you can actually go to some groups and they post the things that Trump writes out because he has a website too,” said Ruth Andrews, 42, referencing an encrypted messaging app and Trump’s new personal website, respectively. In those ways, “I feel like I can still be in touch with what he’s saying.”

Andrews, who lives in Oklahoma and is unemployed, did comment below Trump’s Facebook post one time, though, after his page showed up in her news feed. “I can’t believe Facebook put him back up,” she wrote, echoing a recurring mistake wherein commenters see Trump’s old post, think it’s a new one and assume he’s been permitted to return.

“I thought they deleted the whole [page], kind of like what Twitter did,” Andrews said. “Because on Twitter, you can’t find anything. The whole thing was gone, poof. So I thought Facebook did the same.”

It didn’t, though. Even in Trump’s absence, his page is still up, his final post still visible, its comments section still slowly accumulating replies from people who can’t stop thinking about the man who isn’t there.